Dating back to the 18th century the Harnham Estate, located a short distance outside Salisbury England has documented regional techniques for harvesting water providing a rich history of the practice and the subsequent effects. The methods applied through the centuries reflect regional limitations, a shift in intention and attempts to amplify efficiencies. Although many of these techniques are specific to the region and time period, they are not necessarily unique to the site; it is the extent of the documentation of these exercises and the entrepreneurial achievements intent on monetary gain that make the subsequent story so fascinating.

After acquiring the Estate in 1786 following the death of his Father, Sir Edward Harnham commissioned a series of engraved maps to be produced of the Estate. Cataloging the boundaries of the Estate, as well as all landmarks within the terrain in a series of 4 maps and 2 scenic prints one depicting the manor, and the other the view of the Salisbury Cathedral from the manor. The 2 remaining images both display the dew ponds contained on the site. The large number and proximity of these dew ponds is rare, and is considered to be the largest concentration of dew ponds known in the South Downs. Located on large deposits of chalk the South Downs is essentially a large aquifer making the retention of water a difficult task. For hundreds of years residents of the South Downs have used a technique known as puddling to construct dew ponds which allow water to be drawn from the atmosphere and retained on the surface for long time periods to provide drinking water for cattle.

In the Early 20th century a catastrophic failure exposed a previously forgotten cistern located beneath the dew ponds. A local architecture firm was hired to survey the cistern and assess its potential threat to the existing manor. The conclusions presented stated that once the water had evacuated the cistern it was no longer a structural threat to the residence. No one was injured in the failure, however a large number of livestock were lost. The rupture left a large chalk scar on the landscape which could be seen kilometers away. Inspired by the still visible scar James Harnham and a business partner John Linski founded Ethereal 1. Providing premium bottled water harvested from the now locally known Harnham dew ponds, Ethereal 1 entered the market June 11th, 1991 at 14 £ a litre. After a slow start Ethereal 1 finally met with success in 1995 as the market for bottled water grew exponentially. In order the meet growing demands, a series of dew collecting nets were pioneered by a London based architecture firm MJB Architects which allowed for a 25 fold increase production. Due to peak production vs. bottling time, storage bladders were constructed on the hillside to provide short term storage for water during the process. The Bladders were placed under the surface of the earth to provide protection from the sun, and to retain the waters desired temperature. This new system now mirrored the previous system harvesting, storing, and distorting the landscape, except on an exaggerated time scale.

The success of Ethereal 1 is largely credited to the history of water collection from the Estate. Inversely this success in turn encouraged the use of these techniques in the region to meet growing demands for water during periods of drought. Once these techniques were spread over a larger region their success caused the near collapse of the water table in the territory north of the South Downs.

In 2026 a bill failed to pass that would have banned all acts of poaching the aerial aquifers within Southern England. By 2035 desalination became the leading source of water for England followed closely by atmospheric stripping techniques such as dew harvesting. At present 3000 cubic miles of water exist in the atmosphere at any given time. 98 percent of this resource is replenished every 2 days, and most importantly only 2 percent of this moisture exist in clouds, the vast majority is found in ambient air.

Since 2028 atmospheric aquifers have been tracked and traded as an asset in the global stock exchange. As waters value increases many countries inflate their economies based on water futures. Recognized as one of the most prestigious water companies in the world, Ethereal 1 began to capitalize on their long standing history of water collection. In 2001 the company began selling vintage bottles of water, allowing customers to hand pick select days in which their water was collected. In 2071 an addition to the manor is constructed to house Ethereal 1s reserve bottle collection. The building is constructed out of an amalgamated chalk solution that itself becomes a source of water collection and storage. Three years following the construction of the Reserve House a vintage bottle of Ethereal 1 dated prior to the millennium fetches over 40,000 £ at auction. 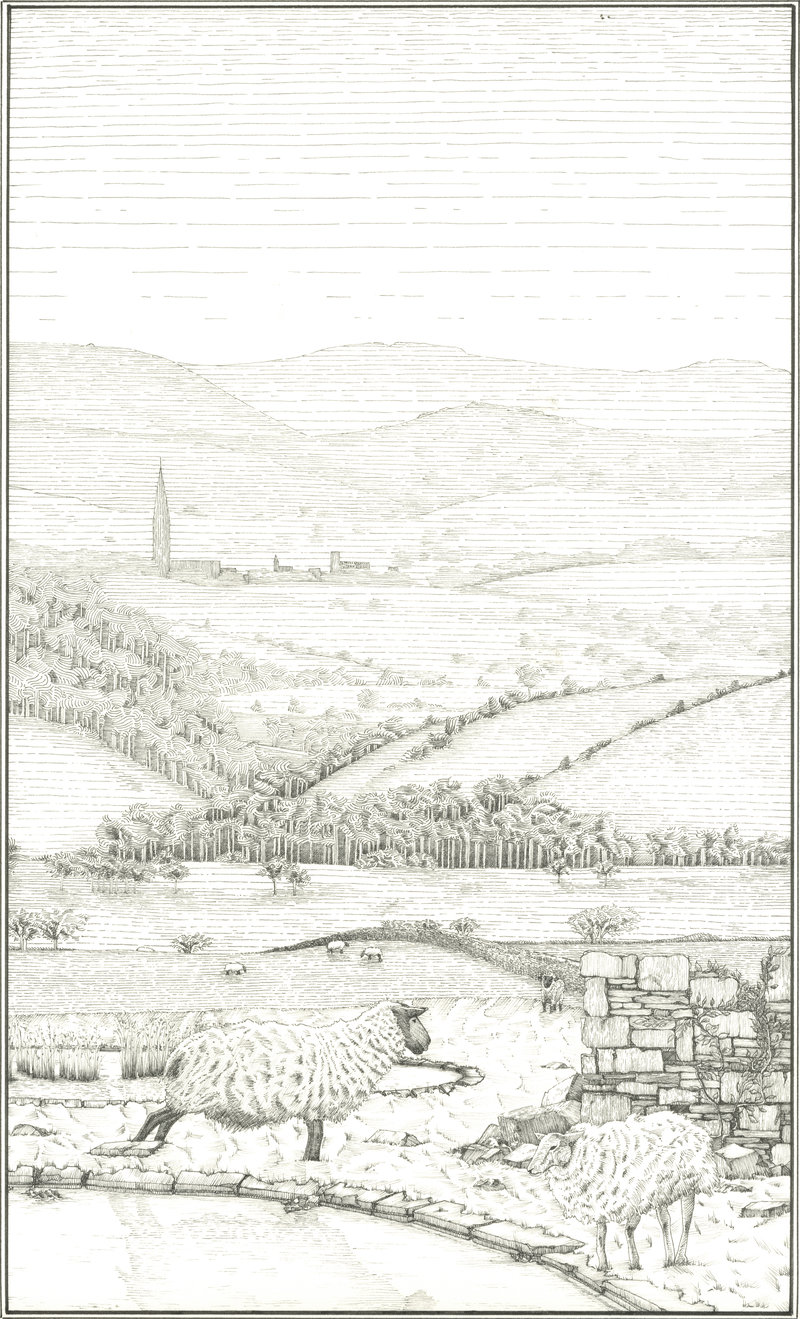 2 Comments on “An Atmosphere Excavated”

Greetings from University of Michigan!

As much as I appreciate the diversity of representational techniques that were used in the project, I was wondering if there was a specific intent behind them. The drawings themselves are well crafted but the absence of representational continuity is personally intriguing. Furthermore how did you reconcile the creation of the narrative? How much of it is based on actual events endemic to the England?

I actually think the variety of representational techniques used in the project actually helps the documentative nature of the project. As the narrative itself is a constructed reality, the presentation itself reflects the archaeological process of the design. It’s almost as if the site chosen site (Harnhem Estate) is as arbitrary as it can get as the actual site that the project is constructing on and excavating from in the author’s imagination. In this case, the architecture depicted here falls into the backdrop rather than being the presented object. The narrative comes forth and dominates the work. Then, I begin to wonder about the qualities that architectural narratives possess and whether they are sufficient enough to create architecture. Like detaching the soul from the body, what becomes of the building when it is stripped of the narrative, and can architectural narratives exist without buildings??