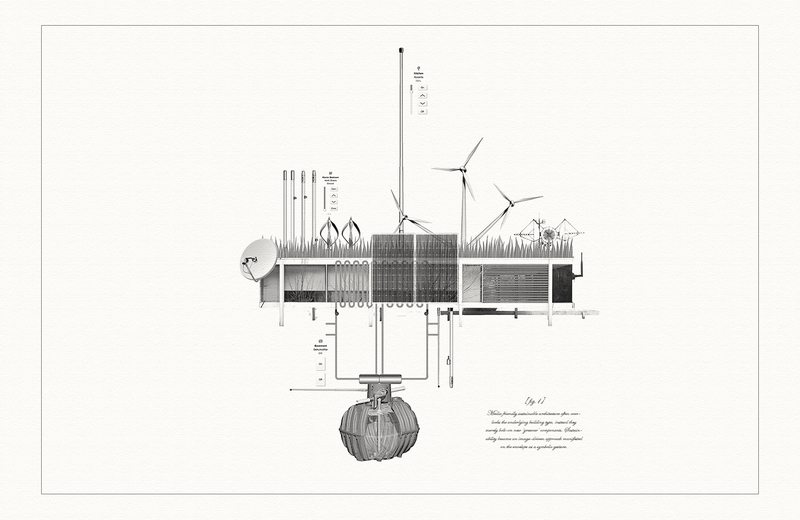 Machines have shared a long and complex history with architecture. One could argue that architecture’s most cherished axiom ‘Form follows Function’ might otherwise be interpreted as ‘Architecture follows Machine’. At the dawn of Modernism, the notion of function served as a key element in architecture’s discourse on utilitarian design. Architects appropriated the engineered forms of automobiles, ocean liners, and airplanes as analogies for functionalist design [Fig. 1]. Le Corbusier advocated the use of machine technologies, specifically industrial mass production and modular fabrication techniques to reinvent the housing typology. Modernist architecture strived to function with the same level of efficiency, economy, and utility that was characteristic of the Machine Age.

In the 1960s, Reyner Banham, reacting against the modernist aestheticization of machine technology, relentlessly embraced mechanical systems as integral components of architectural design. The Environment Bubble [Fig. 2] and a series of experimental pneumatic houses professed a surrender of architectural forms to mechanical systems. Philip Johnson’s Glass House is indicative of architecture of this era, the house is little more than a service core set in infinite space. The ever-more-flimsy structure is made habitable by the ever-more-powerful machinery.

Banham’s ideology had a profound impact on architecture as we entered the global energy crisis. Architects amped up performance efficiencies by using eco-technological machines to produce environmentally friendly architecture [Fig. 3]. The rhetoric of this ‘ecotech’ approach tends to be overwhelmingly quantitative; buildings are assessed based on the numerical reduction of their energy consumption and assigned performance values – ie. LEED points – to determine their success. Considering machines most representative of our time: the television, the smartphone, and the computer are synonymous with their numerical specifications: 4K, 64-bit, and quad core; it is no coincidence that for the first time in history, the performance of architecture has also become quantifiable.

Despite the difference in approach, Corb, Banham and the ‘Ecotech’ all retain affinities with modernist conception of the machine – it solves problems while affording temporal, economic, and production efficiencies. However, the pursuit of function has denied all but the most emaciated forms of human experience. Given such a complex legacy, this thesis zeros in on a distinctly different relationship with machines – Can machines be performative without the conventions of functionality and efficiency?

In fact, there has been a lineage of architectural discourse that offered a different interpretation of performance in response to technological changes. From the 50s onwards, architecture was informed by several waves of technophilic thinking – mass culture, cybernetics, systems thinking – eliciting a diverse range of practices in response – Smithsons, Cedric Price, Archigram, Ben Nicholson, Mosquitoes K/K et cetera. [Fig. 4] Most of these projects were highly experimental, excessively gestural, inefficient, and in most cases “failures” – failures in terms of practicality but wonderful success in expanding the conceptual range of ‘performance’. Out of which, Cedric Price’s Fun Palace [Fig. 5] was perhaps the best example of architecture becoming performative via mechanical applications; not performative in a quantifiable sense, but rather performative through techniques of effects and theater.

This thesis offers a critique of Functionalism’s rhetoric of efficiency and practicality. As Adorno has indicated in Minima Moralia, once under demands of pure functionality, technology can no longer be experienced – only operated. This thesis will build on this expanded notion of performance predicated on experience, with the intention of regrounding architecture’s capacity for affect, perception, and wonder. In our contemporary age of emaciated experience, the true contemporary spirit dwells in the ‘Dysfunctional Machine’.

Dysfunctional Machines are a series of 1:1 responsive devices that hack and graft onto architectural surfaces in a manner that is contextual and heuristic. They can be seen as compressions of architectural space, manipulating phenomena in the same way that architecture does – using space, time, sound, light, and materiality to interact with inhabitants. They are assemblages of components, circuitry, sensors, servomechanisms and linkages that absorb, process and redistribute matter, force and information. The interventions’ architectural environments are considered to be always active, responsive of temporal elements. They seek out behaviours of feedback and response, where the interventions and the environment are mutually transformative, creating cyclical relationships.

Dysfunctional Machines do not offer control, predictability, productivity, efficiency, nor promise for the future; they do not respond to a problem nor yield a solution. Rather, Dysfunctional Machines provide an opportunity to generate effects and conditions that are excessive, robust, spontaneous, and performative.

“There do exist standards for the dwelling house. Machinery contains in itself the factor of economy, which makes for standards. The house is a machine for living in.” Scans from Towards a New Architecture by Le Corbusier 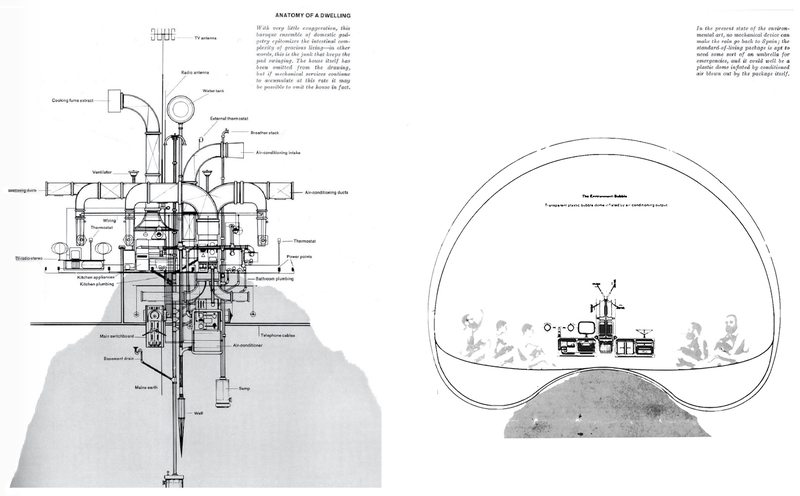 The Environmental Bubble, illustrated by Francois Dallegret for the article A House is Not a Home by Reyner Banham. “The house it self has been omitted from the drawing, but if mechanical services continue to accumulate at this rate it may be possible to omit the house in fact.”

Modernist Architecture is inherently unsustainable because it evolved in the beginning of the era of abundant and cheap fossil fuels. As we enter into the era of the energy crisis, sustainability became a primary concern for ‘Crisis Architecture’. An emphasis on the environmental efficiency has stimulated a whole range of technological innovations to reduce consumption: solar shading, double/triple/quadruple-glazed windows, geo-thermal, wind harvesting, intelligent facades, and photovoltaics. Performance of buildings are measured in a quantifiable manner. Collage by Harry Wei 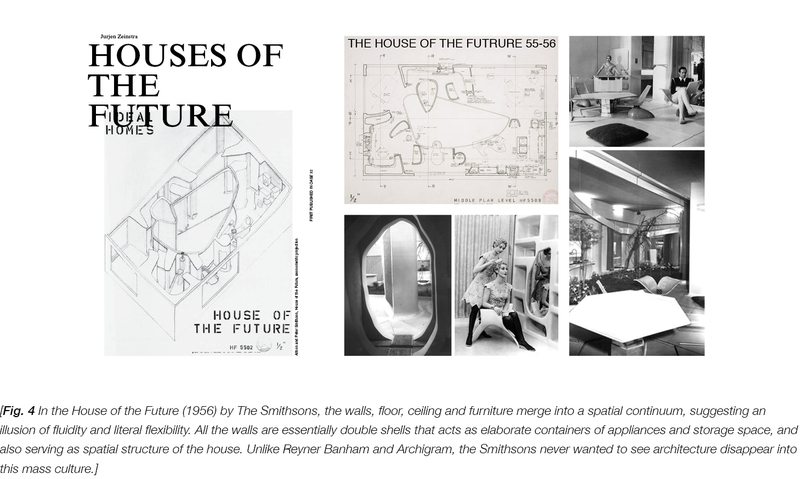 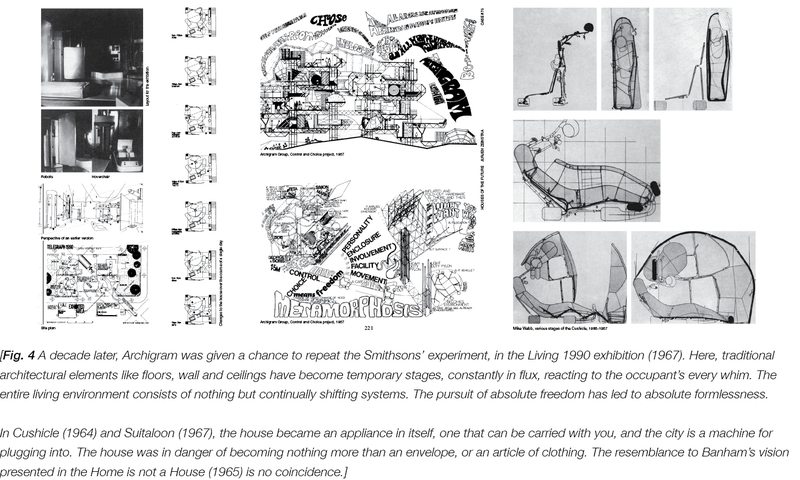 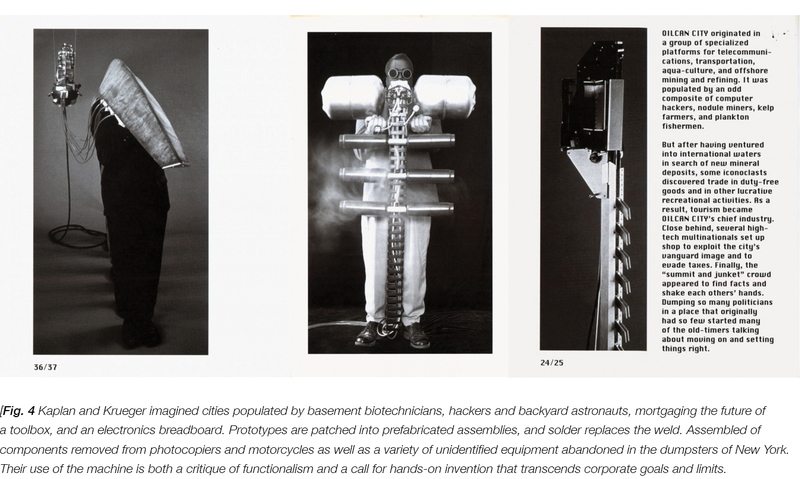 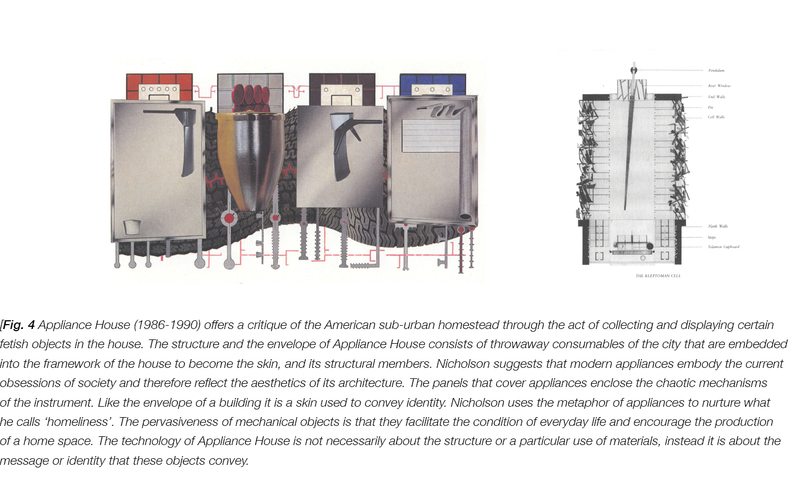 Cedric Price’s Fun Palace and his professed interest in time-based, indeterminate, and anticipatory architectures, quickly assembled and taken apart as necessary. From things like automatons, gadgets that twitch and tweet, and fascinations of a wanderer in the midst of orreries, His work implicates curiosities about unpredictable and incomplete worlds 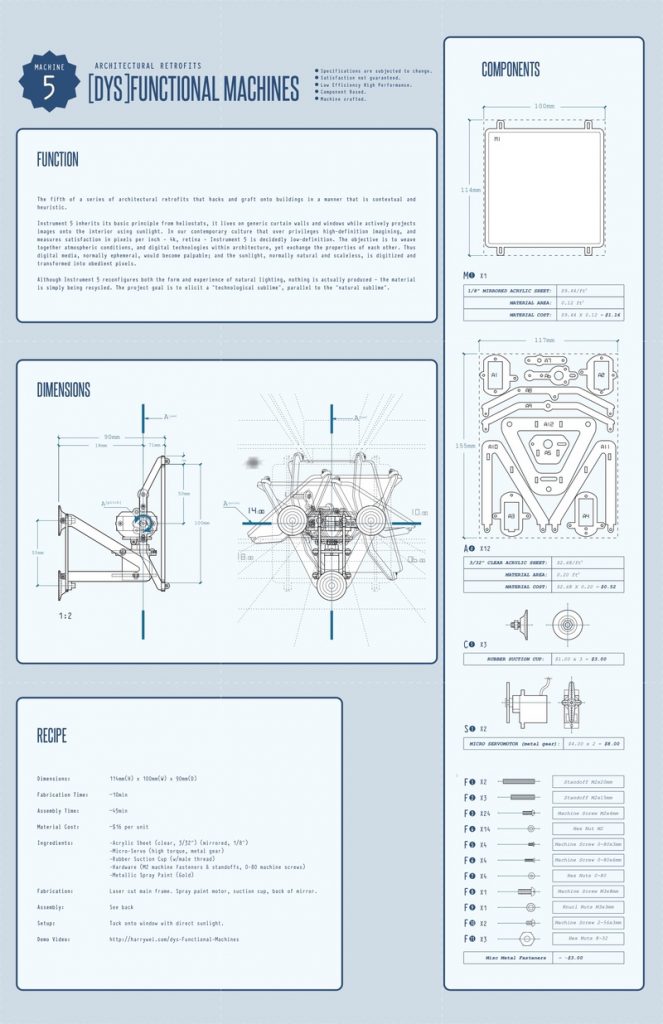 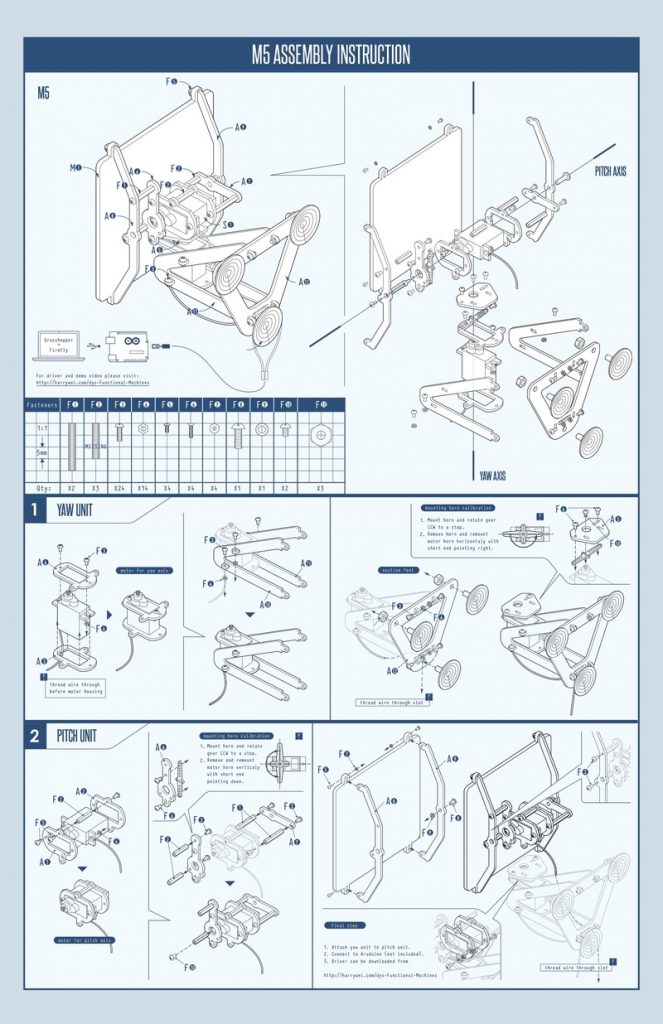 Cedric Price’s Fun Palace and his professed interest in time-based, indeterminate, and anticipatory architectures, quickly assembled and taken apart as necessary. From things like automatons, gadgets that twitch and tweet, and fascinations of a wanderer in the midst of orreries, His work implicates curiosities about unpredictable and incomplete worlds

MACHINE 4 – Graffiti Screen This is the forth of a series of architectural ‘retrofits’ that hacks and grafts onto architectural surfaces. These machines deliberately intensify or perhaps undermine these surfaces of division in a manner that is embedded, contextual, and visual. Machine 4 borrows the mechanism of a 2-DOF pantograph, it applies clouds of ghostly images using condensation as a medium that is constantly on the verge of depositing and fading. The choreography of the path is central to building the perception that one is being watched. The nature of these curious figures change in response to the inhabitant’s pattern of movement and behavior. Its figure, by its nature, becomes a commentary of the building. Here the window is no long used to frame view or to let light in but has assumed the role of representational surface, a performance screen. Consider glass as a material of disclosure and an instrument of communication.

MACHINE 5 – Heliopixel Machine 5 inherits its basic principles from heliostats, it lives on generic curtain walls and windows while actively projects images onto the interior using sunlight. In our contemporary culture that over privileges high-definition imagining, and measures satisfaction in pixels per inch – 4k, retina – Machine 5 is decidedly low-definition. The objective is to weave together atmospheric conditions, and digital technologies within architecture, yet exchange the properties of each other. Thus digital media, normally ephemeral, would become palpable; and the sunlight, normally natural and scaleless, is digitized and transformed into obedient pixels. Although Machine 5 reconfigures both the form and experience of natural lighting, nothing is actually produced – the ‘material’ is simply being recycled. The project goal is to elicit a ‘technological sublime’, parallel to the ‘natural sublime’.