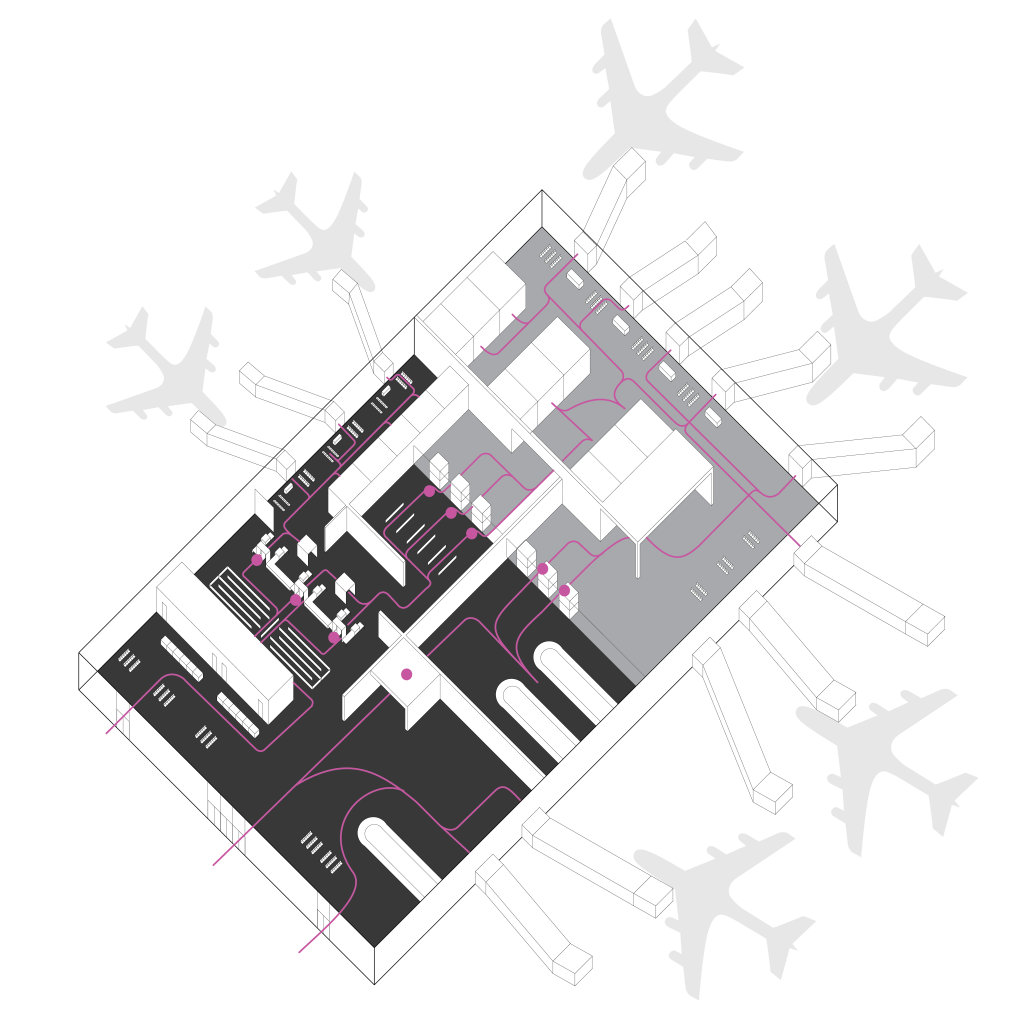 Existing architectural manifestations of political exception are the Airport and the Camp: semi-urban typologies distinguished by controlled access and circulation, vertical walls, and a manipulation of view to the outside. Both provide venues for the collective and the individual, within a spectrum of multi-scalar spatial conditions. While the airport operates as a circuit and node network, the camp behaves as a figured field. Still, both are enclosed, apolitical spaces that operate within but outside of their immediate context. This typology could be urbanized by opening up the extraterritorial zone into a ground of exception in the city.

Extraterritoriality, the state of exception from local jurisdiction, is not yet formally manifest as an urban architectural problem. Bound by vertical walls and political geometries within island typologies such as airports, embassies, and free trade zones, current modes of architectural extraterritoriality are founded upon a disconnection from the city.

The ExtraTerritorial Typology is an urban architecture that reconfigures the boundary conditions between territorial grounds and user groups: displaced populations and local citizens. Mediating between global and local scales, the ETT relates to its urban context despite its bigness. The ETT demarcates its non-vertical boundary in relationship to the existing ground by strategically connecting to and detaching from the site topography. Above/below/askew take precedent over the conventional interior/exterior dichotomy.

The ETT accommodates a spectrum of multiscalar international programs within venues of emplacement and displacement dispersed in topographical bands across the site. As an urban scale site intervention, the project is a megaplane which interacts with the existing ground. Sometimes a surface condition, sometimes as megaobject, it is perceived from the street as a shifting architectural form. it extends from the urban context to accommodate programmatic spaces of individuation and collectivity, from transit to asylum, from privatized medical treatment to public athletic stadia.

The test site for insertion of the ETT is in Istanbul, at the emergence of the intercontinental subway connection between the Asian and European sides of the global city. A temporary destination for tourists and travellers, the city also is the inadvertent detention zone for thousands of transit refugees and asylum seekers. The extraterritorial typology intermingles these formerly disparate groups with the local public in an international collective of the megaplane.

The nomad band stretches from the subterranean subway platform to the spectacle stadium, providing a crenelated surface texture which serves as a public infrastructure for temporary occupation and use: the urban camp. A stacking of transit infrastructures provides multiple scales of access to and circulation within the site.

The body culture band accommodates the medical complex of public bath and private surgery hotel in a layering of planes into which embedded pools created a deep, yet transparent surface.

The world band dips strategically to provide access to the medical building, and then to construct a public amphitheater which steps down below the lifted volume of the world consulate and political convention center, creating a shared continuous atrium space between the pubic and political zones of exhibition.

The refuge band lifts and fans to provide a terraced decking for temporary asylum residences from which observation rooms are punched upward and downward, providing venues for directed, displaced surveillance.