“Seth’s project, as he states, asks the simple question “What if we introduced [or re-introduced] zoological/ entomological/ botanical specimens into our everyday lives?” And we totally agree with you Seth. What if? What if we had a greater awareness of the animals already around us? What if a greater diversity of animals could find a way back into our cities, or towns? In the nooks and crannies of a decaying metropolitan World Seth Muses about this “What if” question. In the Feral City coyote’s take over the Holland Tunnel, bats squat undisturbed in vacant apartment towers and insects build their own habitats. The images are stark, uncannily axonometric and, with the exception of a lone imprisoned beekeeper utterly devoid of Human presence — images of post-Katrina New Orleans, or present day Detroit come to mind. We are indeed led to imagine an oxymoronic urbanism, one without human presence — begging the question: does such a radically diverse ecology exist only in the absence of humans? We doubt this, and we believe Seth does as well.”

As we are bound and confined by buildings, so are animals in a zoo. These scenarios propose a new kind of ecosystem that coagulates the Homo Sapien environment with an that of an animal. Just as the settler builds on the west, the animal builds in the “Feral City”. The “Feral City” is a wild city. The plants, animals and insects proposed are merely meant to be catalysts of an emergent ecosystem of many more systems and organisms. These are theoretical proposals for a symbiotic relationship with organisms other than ourselves, inherently evolving/ changing. 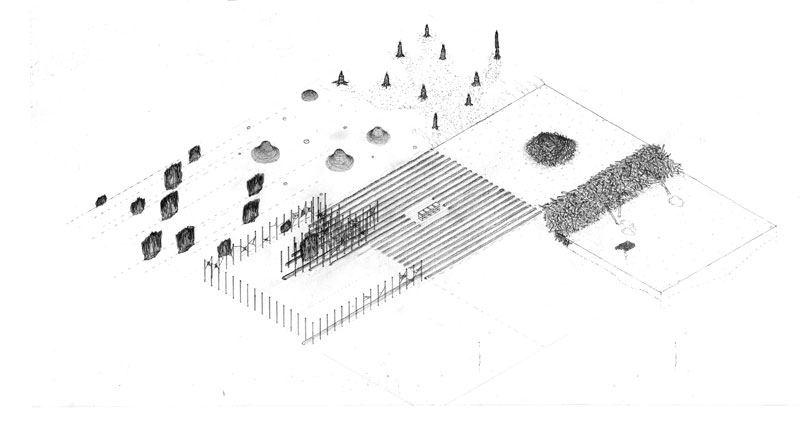 ↑ A field array of animal architectures: termites, ants, beavers, bees, and spiders. This is a collective of constructors, a zoo in which the animals build for themselves 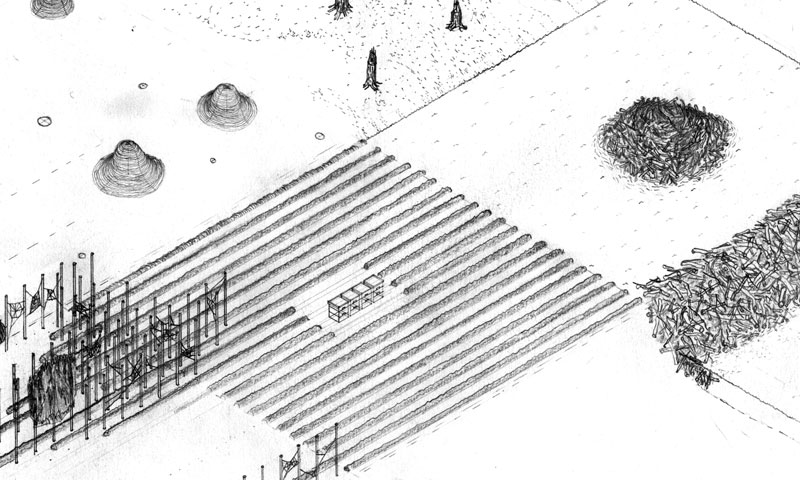 ↑ at the zoo of animal architecture, no maintenance is necessary 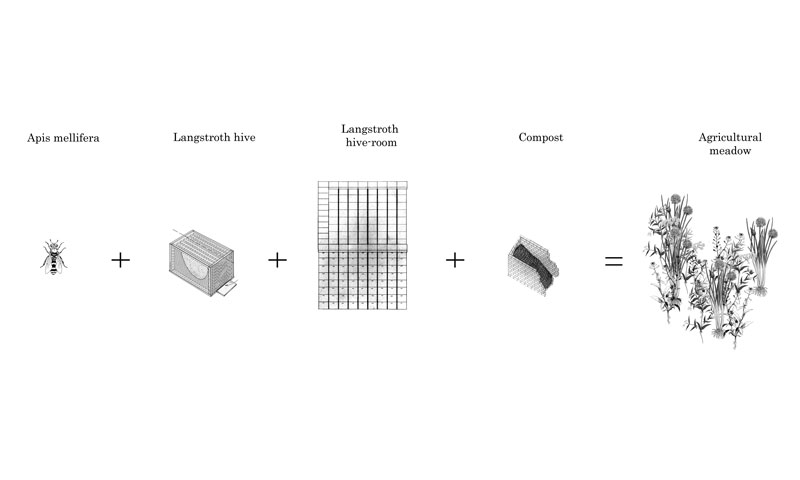 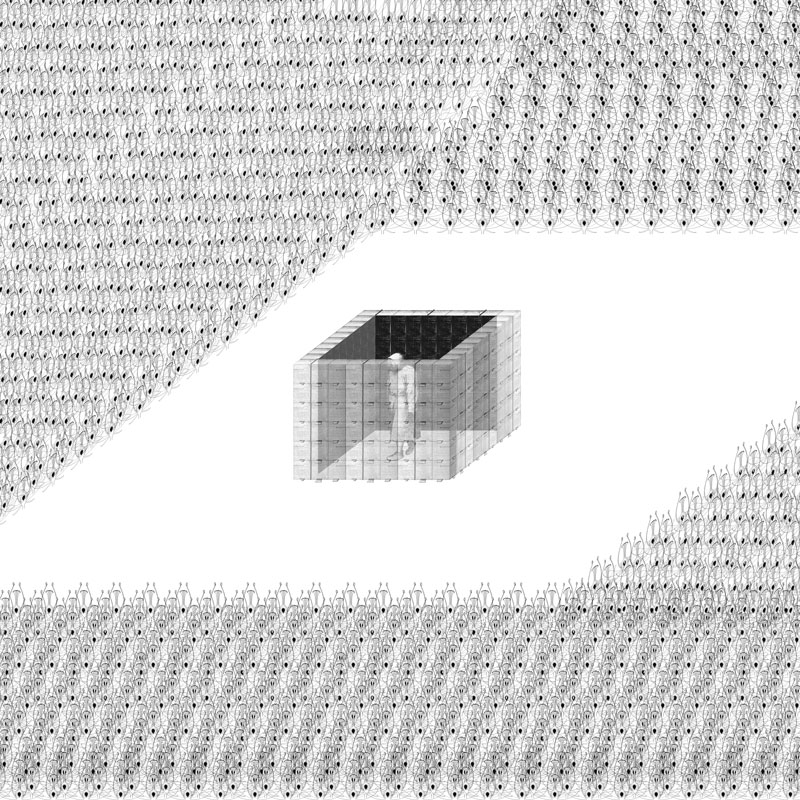 ↑ Beekeepers have been known to stack beehives in columns up to 15’ high. The beehive presents itself as a building module for many reasons. A wall of hives would be a wall of heat: bees maintain a constant temperature of 95° Fahrenheit year-round. Many dwellings throughout the world have learned to incorporate wall cavities specifically for beehives. The architecture of the hive does not end with the box itself, but expands its territory into the surrounding flora, which is symbiotic to the survival of the hive. Thus, the house is as much a flower as it is a hive 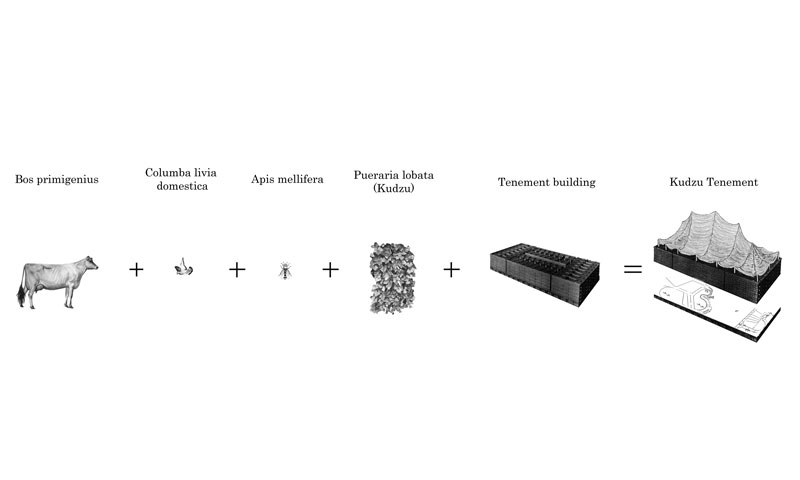 ↑ Architecture is commonly seen as the physical manipulation of the built environment. However, this project is not about designing buildings, it is about designing systems that integrate natural (animals) and synthetic (architecture) components. The system presented above illustrates how waste could be controlled on a local level using cows and other organisms. These are manmade ecosystems 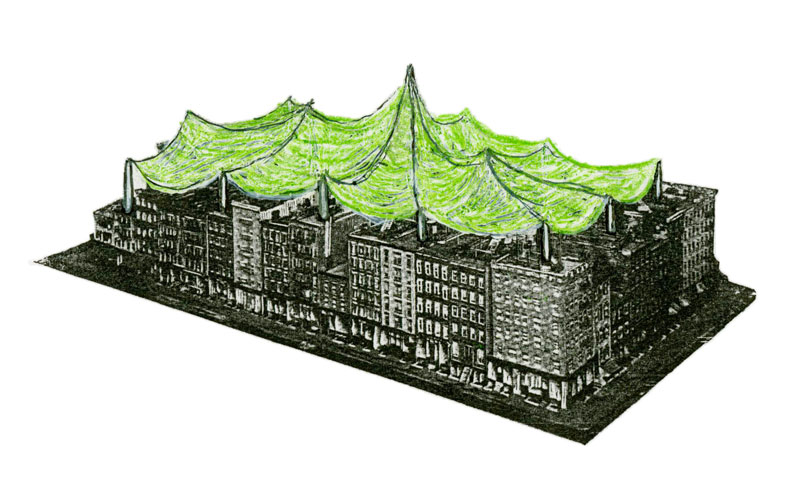 ↑ Kudzu, an invasive species rampant throughout the east coast of the US, can grow up to 1′ per day. In a rural setting, Kudzu poses an ecological and agricultural threat. however, in an urban context, kudzu’s function as a pest could transcend into a building material. here it is, on top of an east village tenement block in New York City 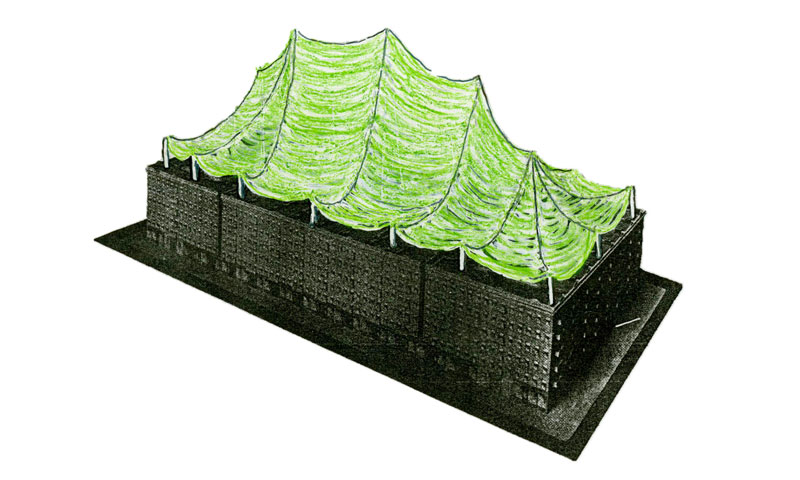 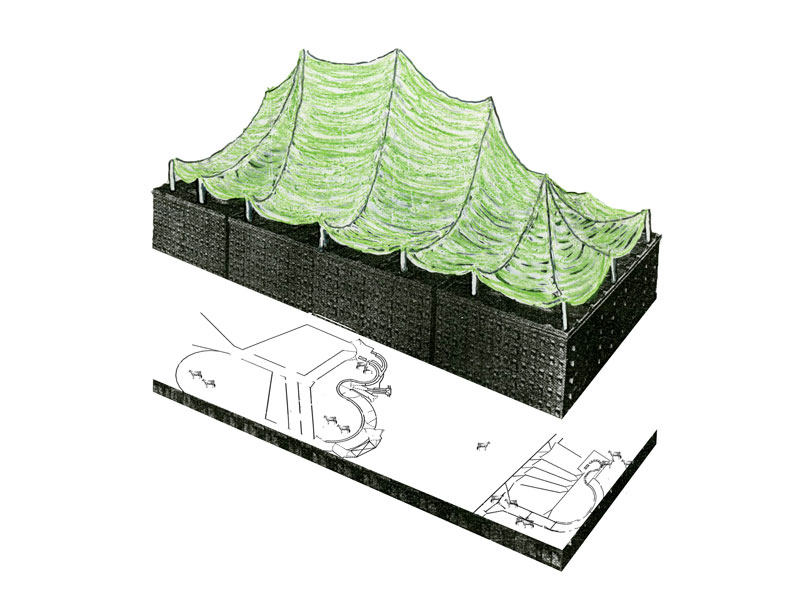 ↑ Kudzu Cow Tenement. Using the invasive species “Kudzu” as a building material, the vine creates a canopy of greenery supported by a steel-cable tent structure 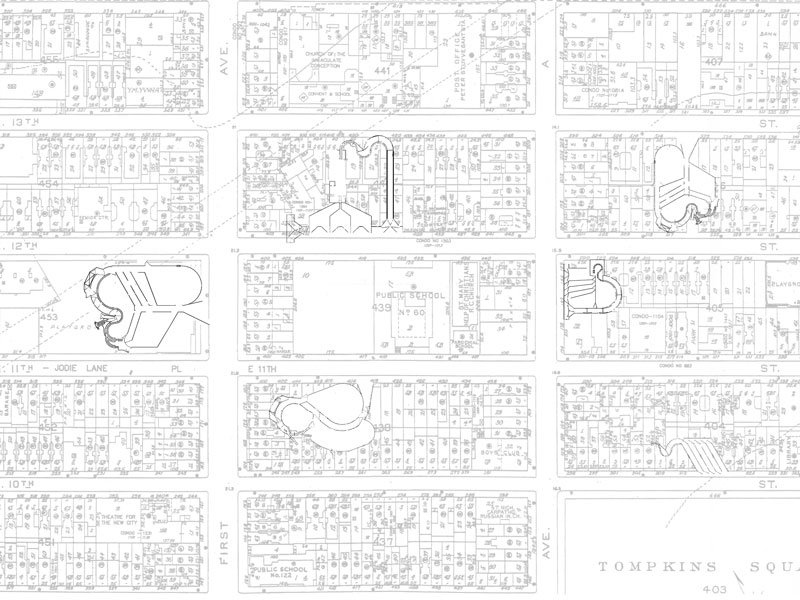 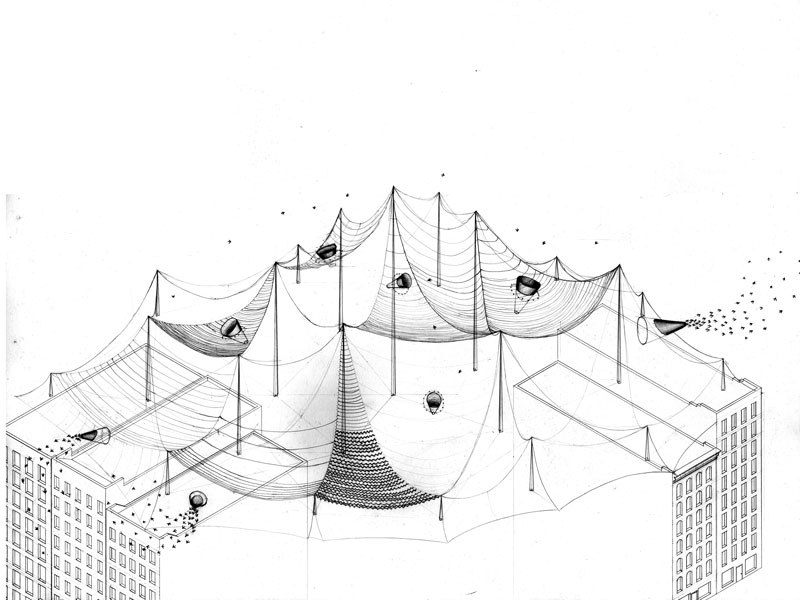 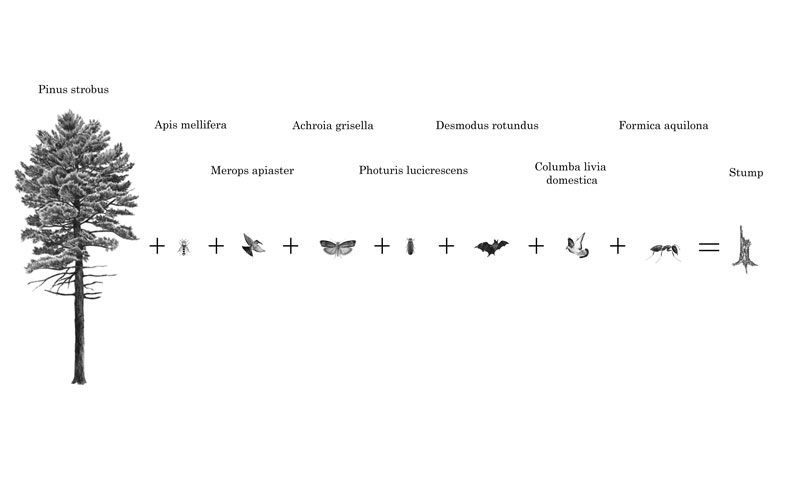 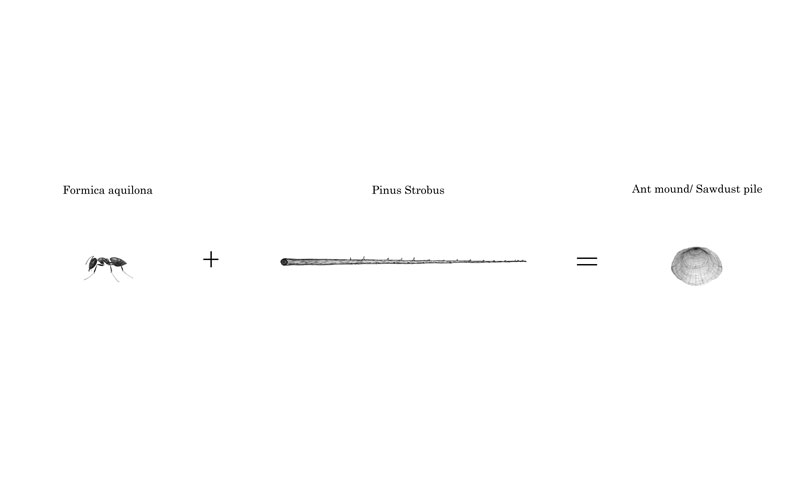 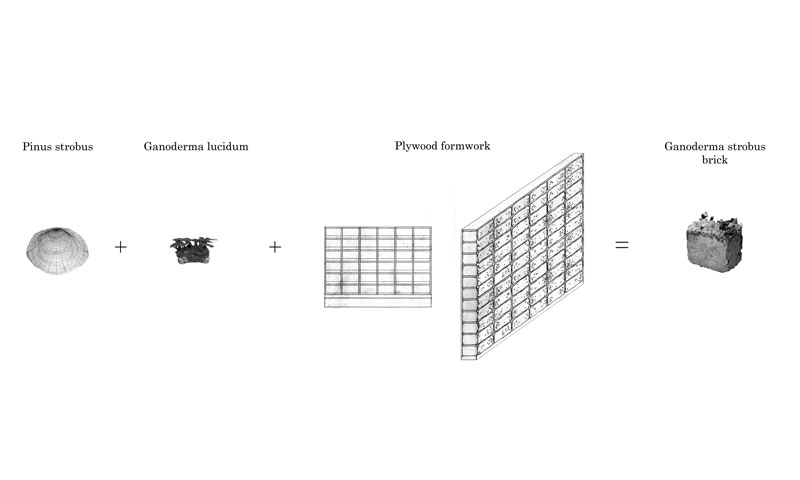 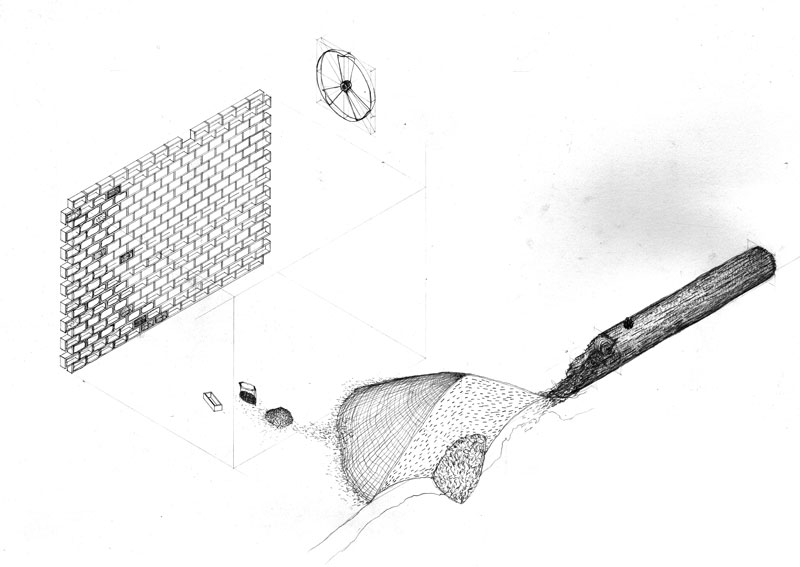 ↑ a system for creating mycological bricks: from its beginning as a tree broken down by carpenter ants into sawdust, and finally mixed with mushroom spores to produce mycological bricks. the ant becomes the mason 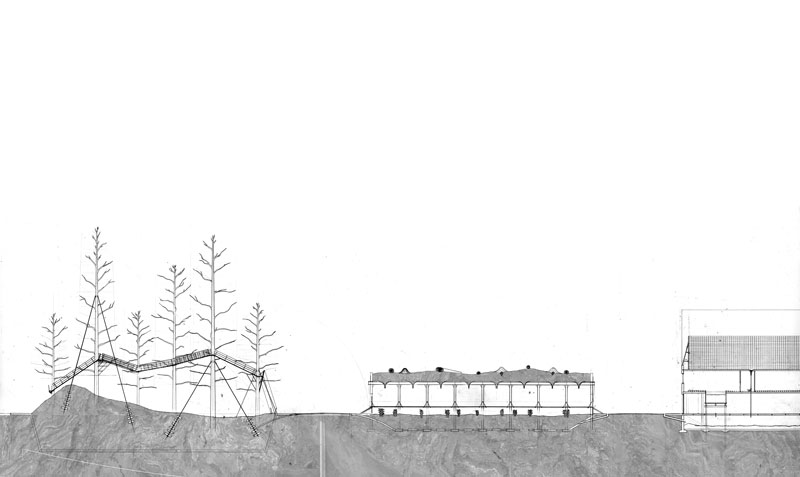 ↑ each step of these processes is integrated into the urban framework. the section shows how each new york city block could be treated as a step in the ecosystem 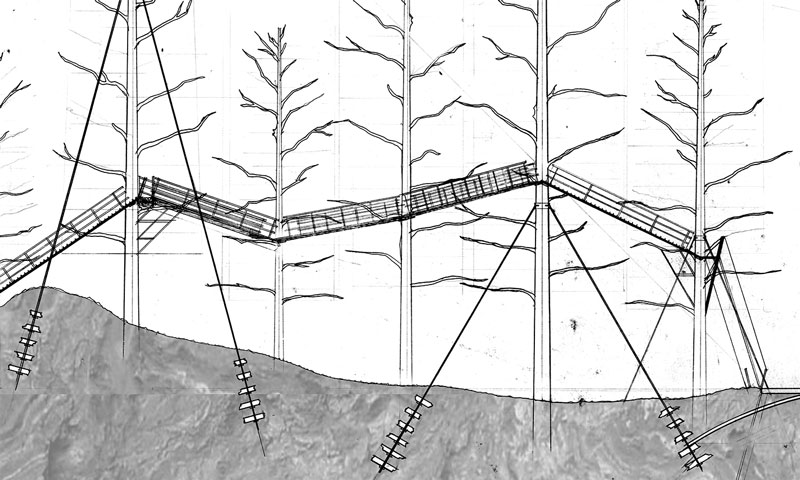 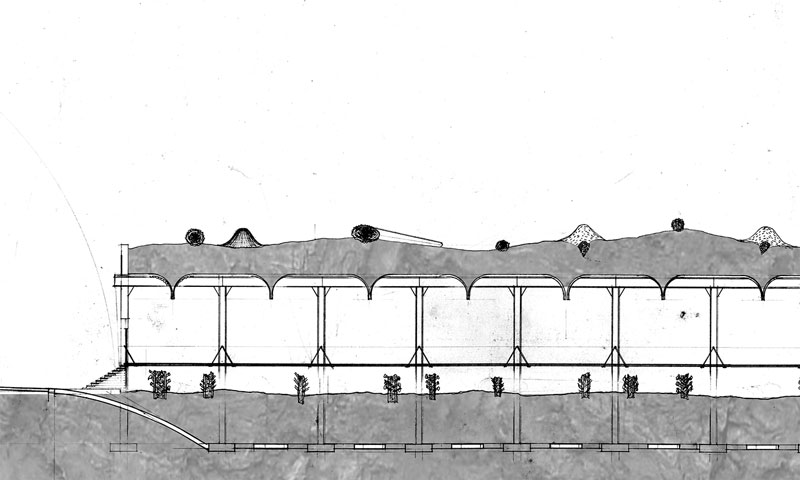 ↑ fallen trees are taken to the decomposition block where ants turn solid wood into sawdust. on the lower level, mushrooms are grown that will be mixed with the sawdust to create mushroom bricks 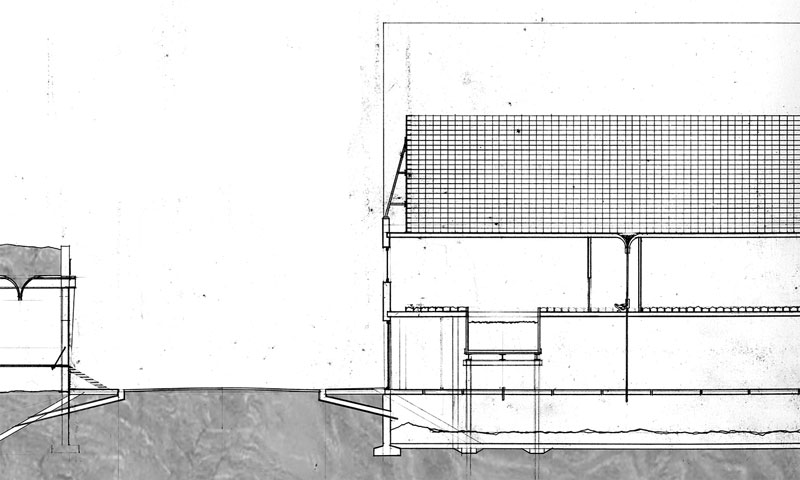 ↑ finally, a mixture of mushroom spores and sawdust is placed into brick formworks that will mold the concoction into a modular building unit 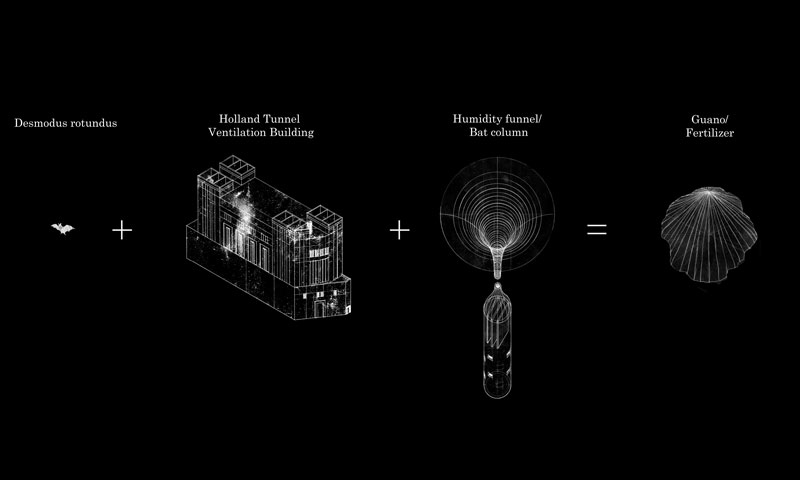 ↑ bats are synanthropic- they live near, and benefit from, an association with humans and the somewhat artificial habitats that humans create around them. bat feces, aka guano, contains phosphorous, which makes it a great fertilizer. considering both of these traits, the bat is the perfect candidate for the Feral City 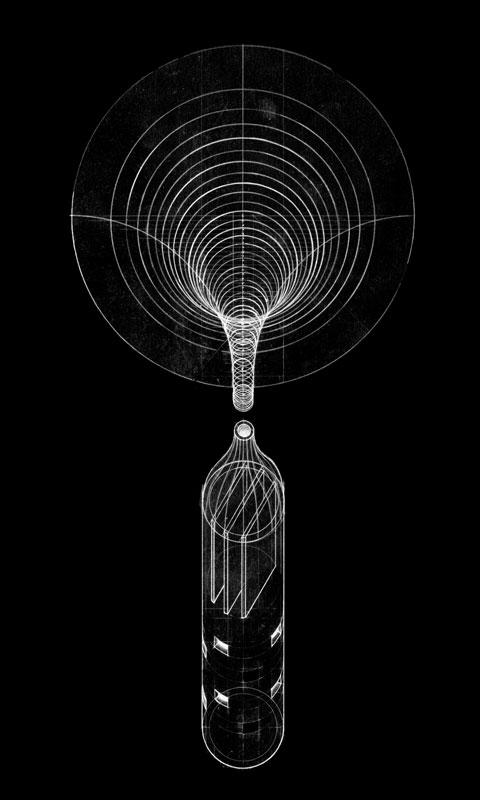 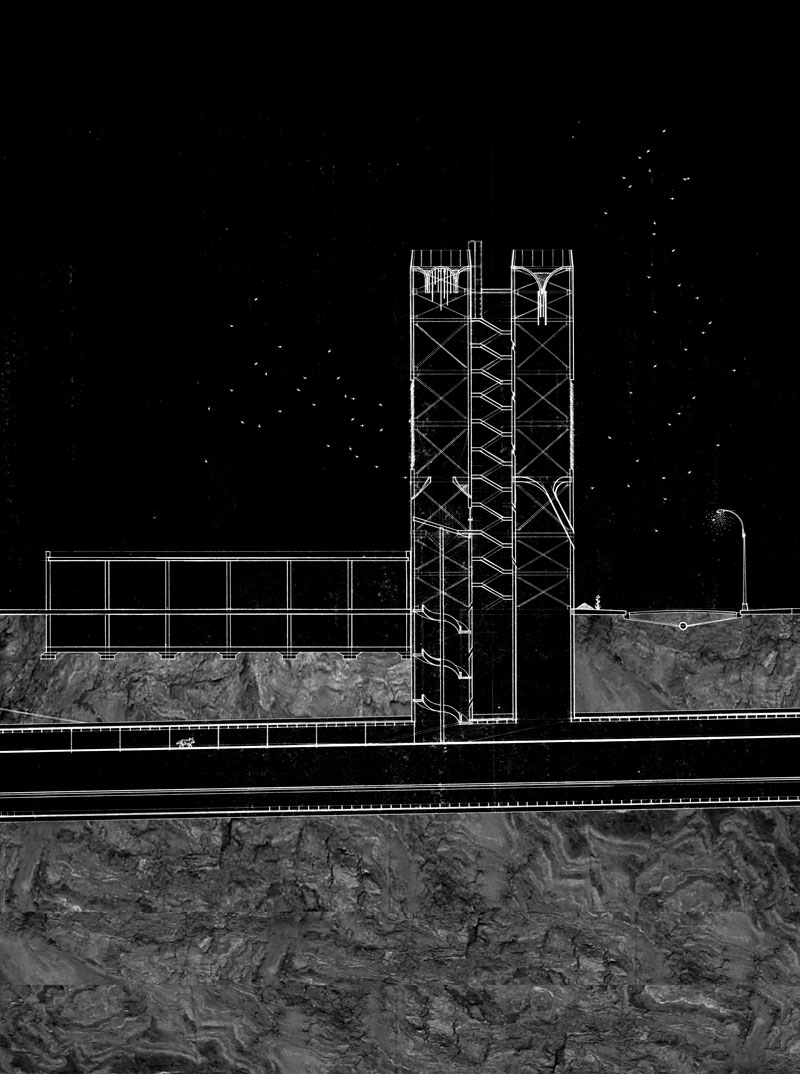 ↑ when inserting animals into an urban context, it is important to consider the ecosystem of the built environment. each neighborhood, or zone, has its own microclimate, hours of operation, noise level, occupation level, etc. the holland tunnel ventilation shaft provides the perfect ecosystem for the bat: uninhabited by humans, its location in an industrial zone, its proximity to a water source, and dry interior climate. furthermore, it is the first connection to the island of manhattan from the mainland. this allows terrestrial animals (like the coyote) access to the concrete jungle 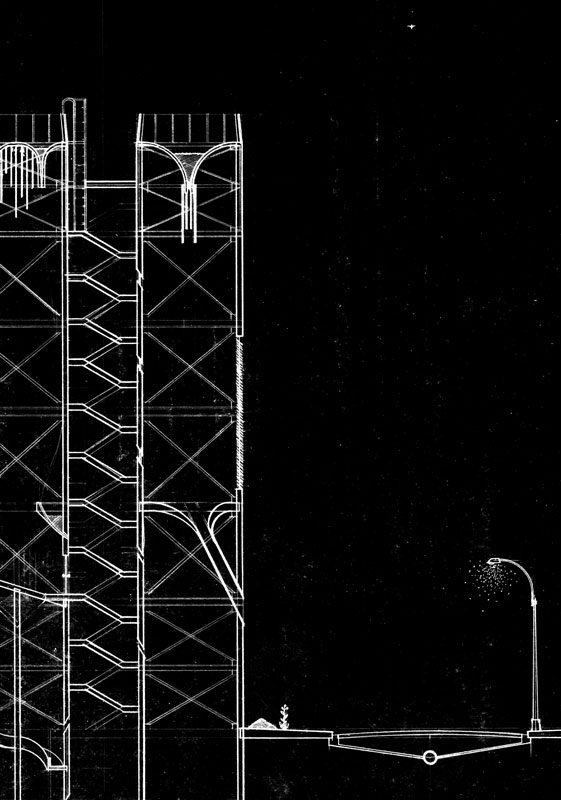 ↑ Feral Architecture proposes to reinvent the use of stagnant buildings. For example, the conditions of the Holland Tunnel ventilation building in Manhattan, NY are ideal for bats. The building contains a series of fans that push air into and out of the tunnel. This industrial building has no human inhabitation, ideal air humidity, ventilation, and architectural components for the bat (lack of windows, thin slats that serve as doors, and proximity to a water source). Bat tubes and slots would be inserted on the ceiling of the ventilation shafts. Funnels above the bat tubes collect water to maintain the ideal humidity. The guano from the bats would be used for the attraction of more bats, as a fertilizer for sidewalk vegetation, and collected as a source of phosphoric energy. Sidewalk lighting attracts nocturnal insects essential to the bat’s diet; lamps are bat buffets 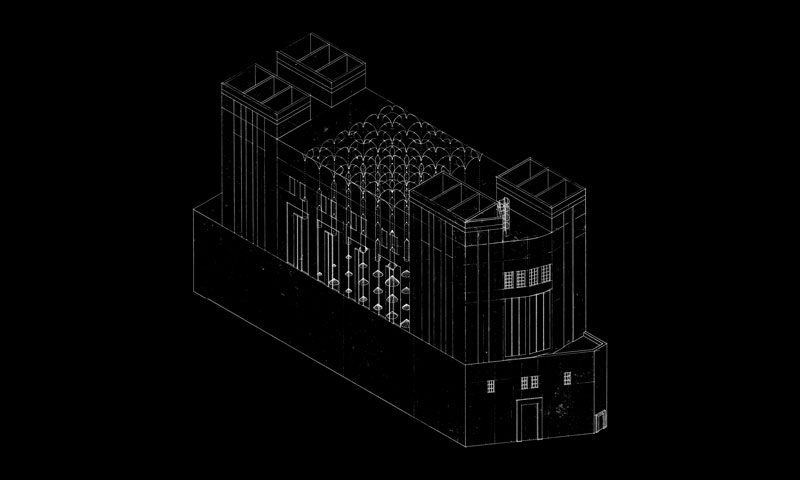 ↑ axonometric of the holland tunnel ventilation shaft, with bat funnels inserted into the ceiling. the building becomes a source for guano harvesting, which is used to fertilize plants throughout the city 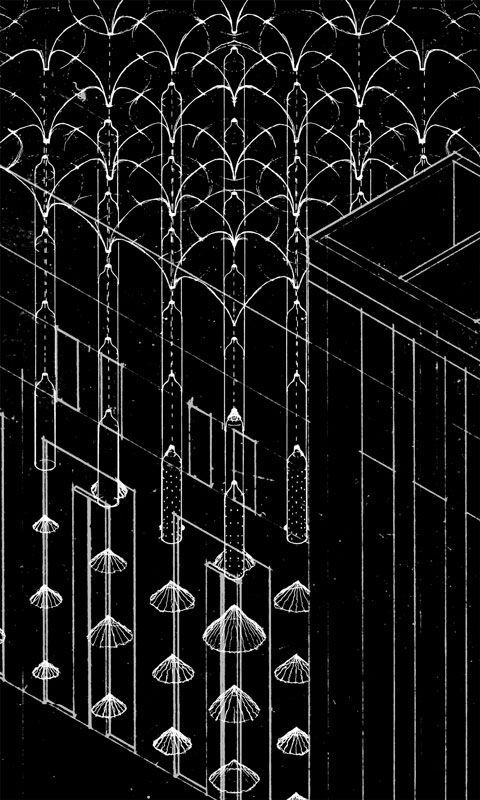 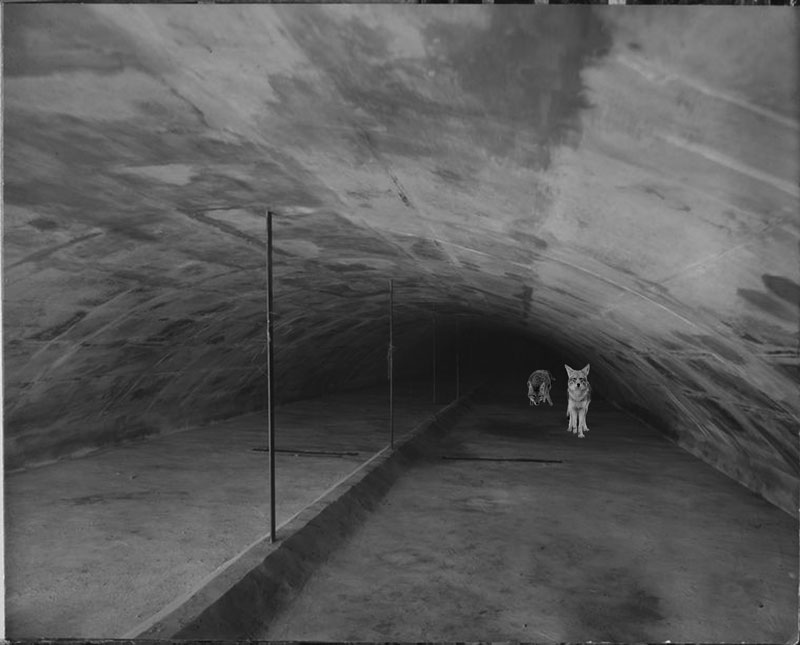 ↑ Coyotes, another synanthropic animal, use the holland tunnel air shaft as a route from new jersey into manhattan. in march 2010, a coyote was found roaming the streets of tribeca, the same neighborhood as the holland ventilation shaft- their numbers in new york city continue to grow