I like to call Food & Architecture a hybrid project. It has a parallel program that is flowing between being a production unit and an academic institution. The focus in the project is communication. By exposing the cycle of food to the urban dwellers, a greater understanding and respect for the origin of the things we eat is attained.

The main issue addressed in this project is the general lack of knowledge regarding food production and the origin of the raw product. A sharp criticism against this un-sustainable and naive way of living has been the point of departure when going into the design.

The educational focal point is not on the inbound academical institution as an isolated event, but on the public’s experience of the work that takes place inside. The production of food is exposed and dramatized by the buildings expressive body. An expressiveness inspired by the history of the site, where a shipyard used to lay. An industrial landscape crowded by machines and components soon to be assembled. This geographical context is north-west Malmö, on the edge of the old town,
bordering the artificial, 100 year old peninsula called Western-harbour. One of the system the Cook School interact with is Malmö University, whose academic buildings lies like a ribbon between the two historical entities. An other contextual system on the site is Enercon Windtower Production’s storage backyard. The huge windtower components, spread over the field, acts as bordering facade to the Cook School, where it roots itself between the industrial backyard and the canal.

In the Cook School a number of food-production units are set to play, along with consumption and waste-recycling to obtain and examine a small-scale, closed cycle. The units are working with fish-, meat- and vegetable production. Each of these processes are amplified by a machine. These machines symbolize movement, mechanics, progress and production. As components in the greater machinery, they make up the cornerstones of the building.

Morphologically the building has been assembled by strategically distributing the production machines according to contextual features. Between these a one-story plinth is sunken into the landscape, meeting the canal. The plinth houses the school while its roof work as a landscape flow, for the public’s experience-sequence. A journey filled with evocative visions, scents and interactions.

Where do we interact with the building and what can we see? Where is it prohibited to enter and where are we lead?

The system grew into living in symbiosis with the visitor, since its utmost purpose was communication. Hence the regulations for the system was set up according to the educational program, to explain the food-cycle, both within the school but even more outwards, to the public sphere. 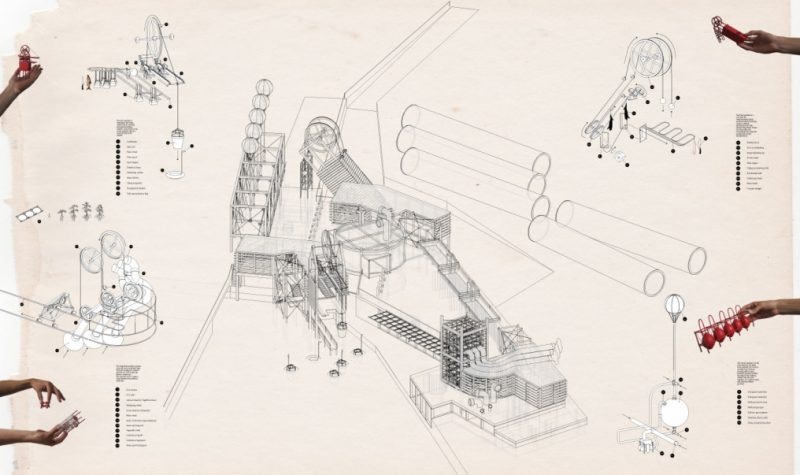 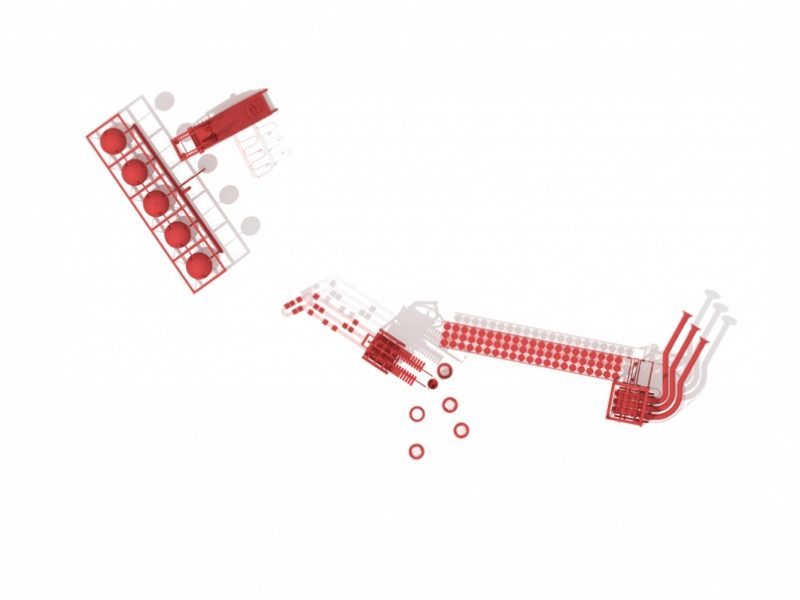 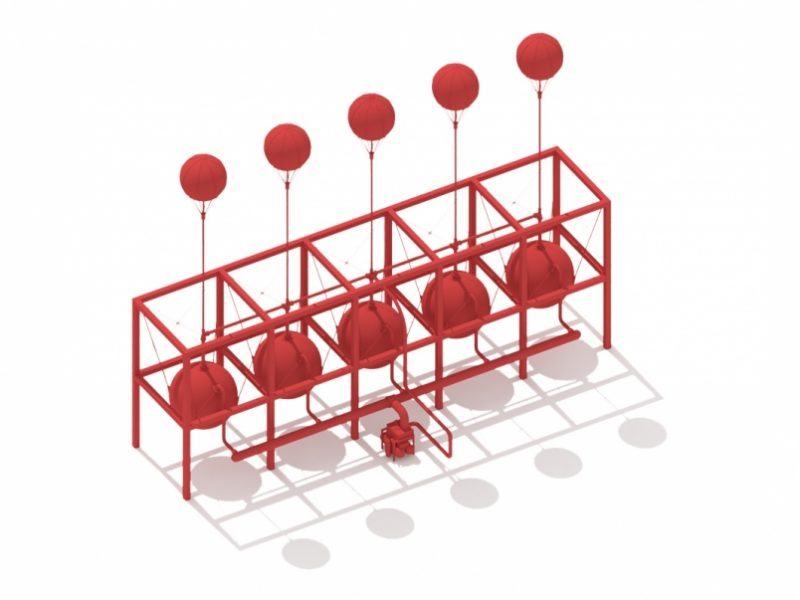 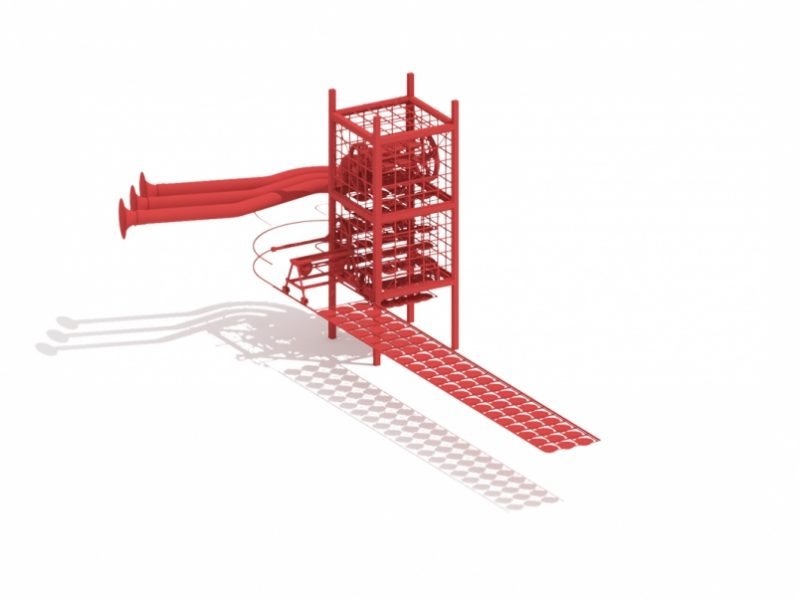 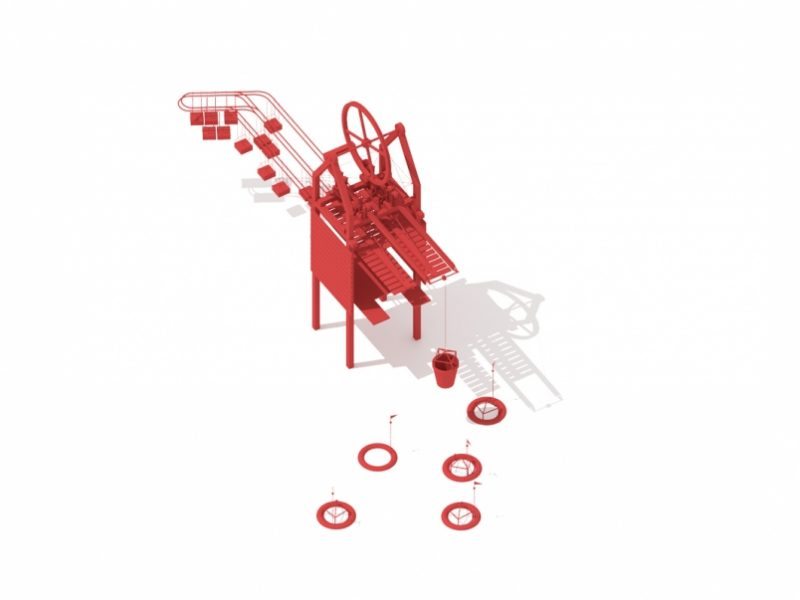 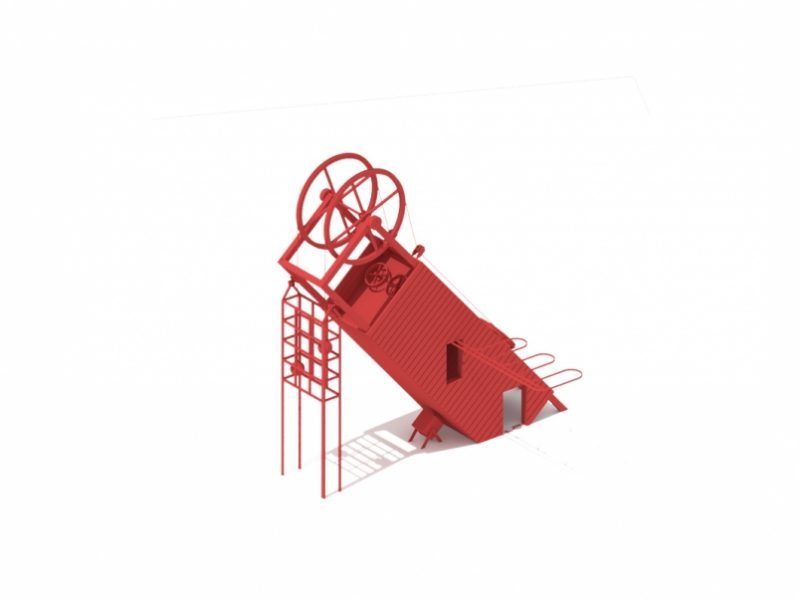 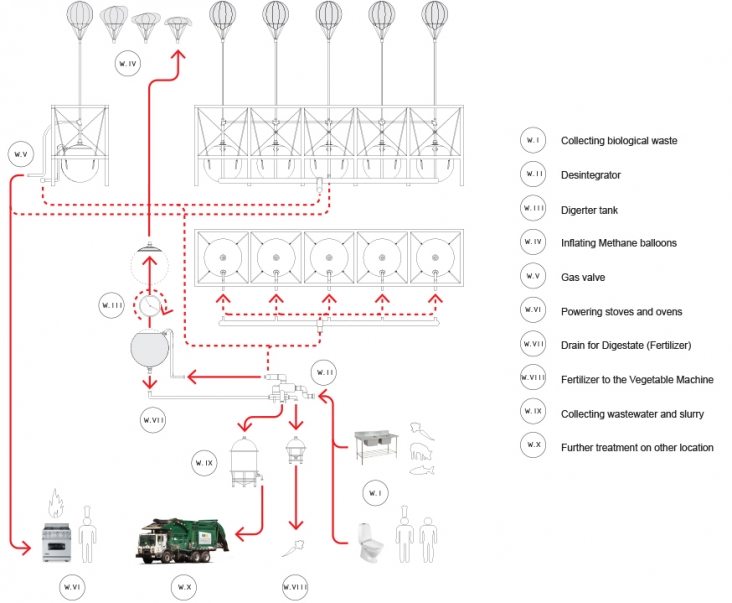 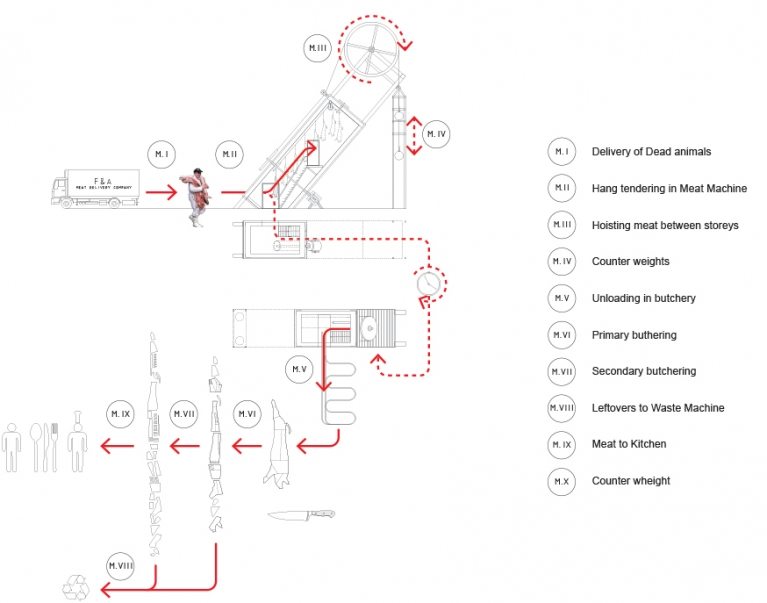 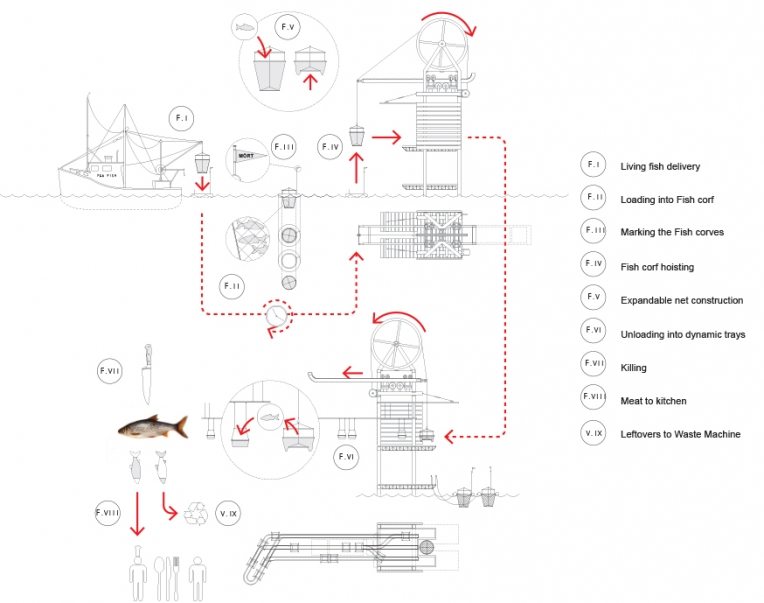 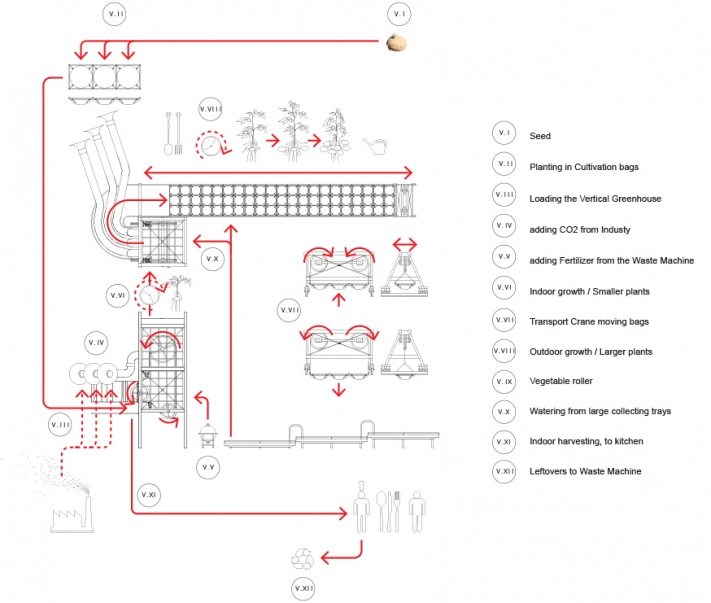 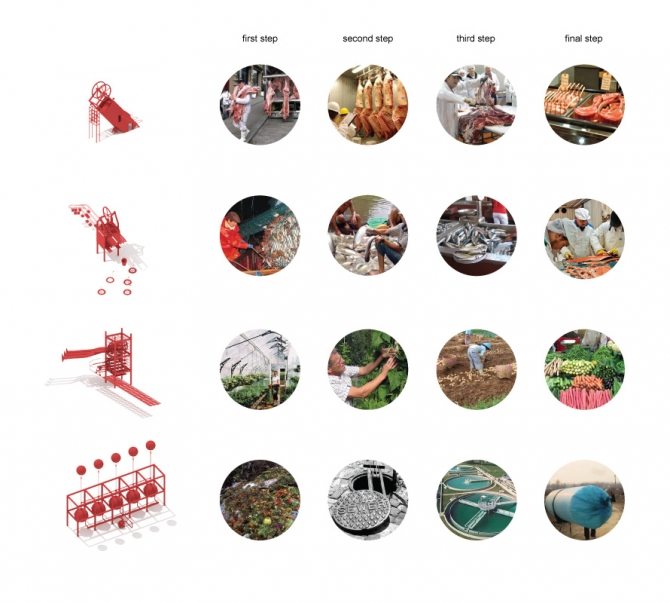 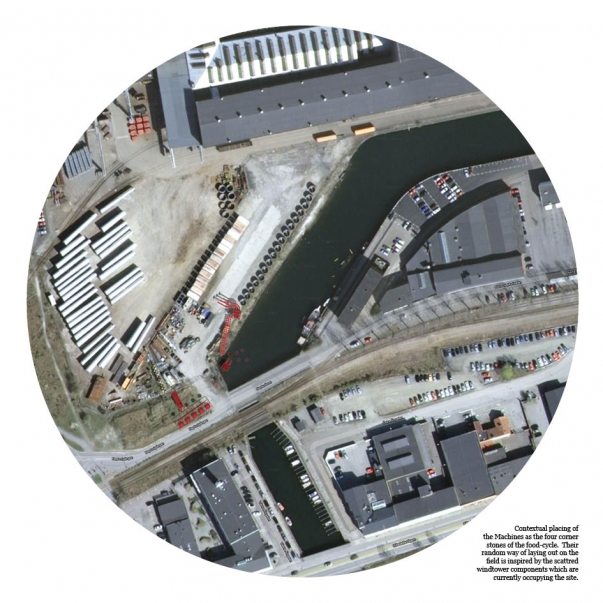 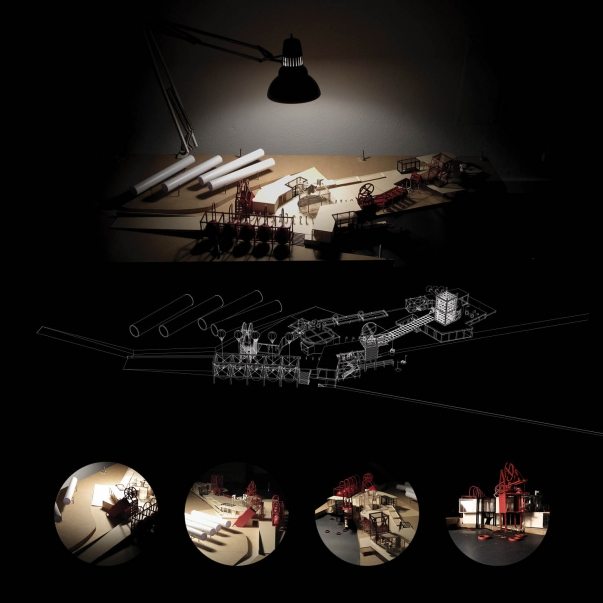 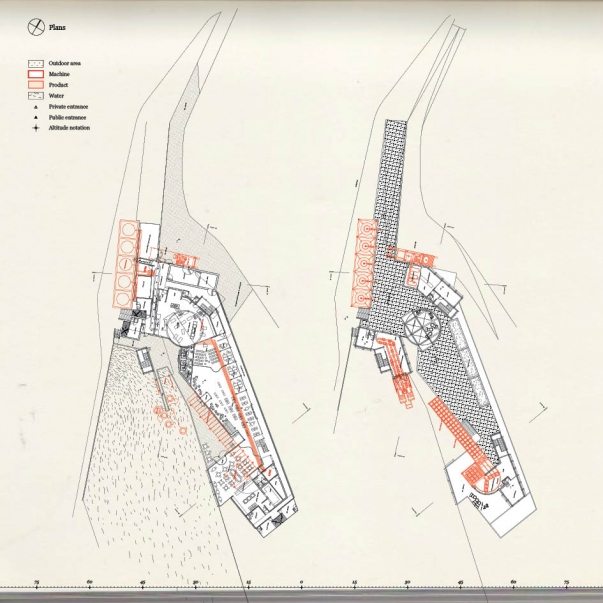 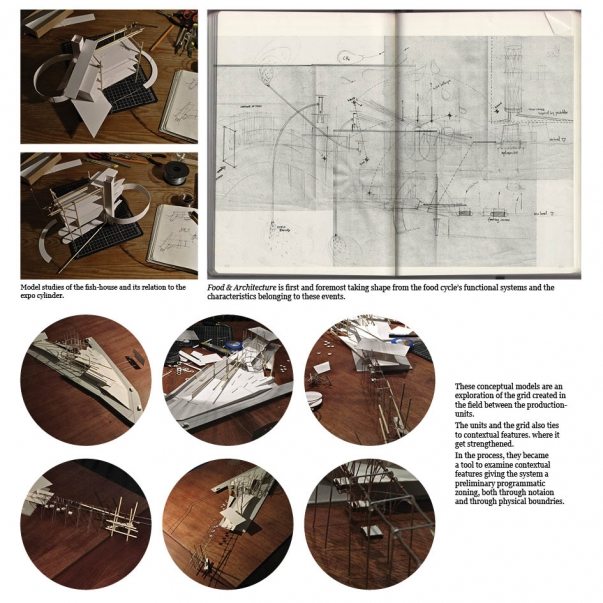 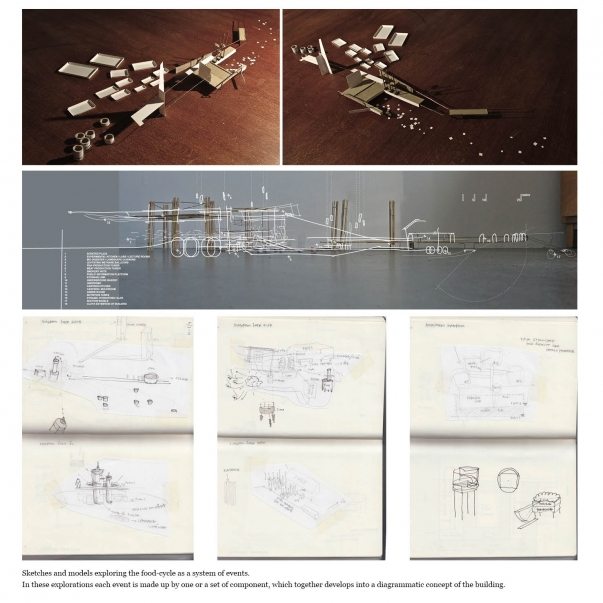 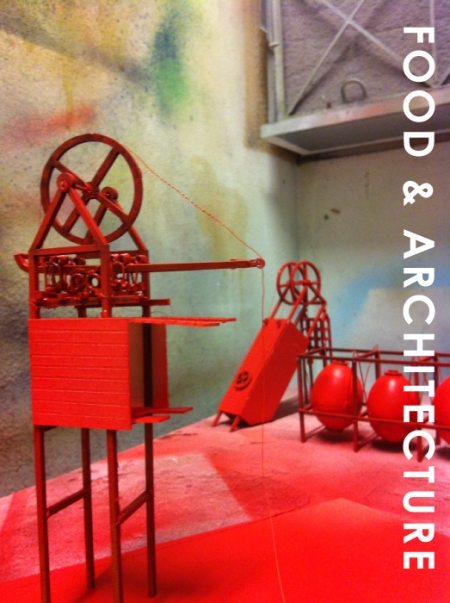