I saw an ancient city that was an alternative to the history of civilization; it was a city that seemed to have no history: it consisted of its people’s lives, rather than the consumption of their bodies and minds.

Burdened by the social and economic debt of generations, the American house has become morally bankrupt. Each room in the home is saddled by cultural predetermination, gender specificity, and unproductivity. This project proposes dissolution of these debts by exchanging the home’s inherited thresholds for a single productive frame. Supporting fundamental domestic labor, these walls play host to the lives of their inhabitants and offer a blank tableau to reconceive of domestic space. Analogous to the state of migrant workers, this settlement offers refuge to émigrés left exhausted by the tribulations and demands of contemporary life. Re-annexing the forgotten spaces of Houston’s lacunae, these new neighborhoods are organized as a series of pedestrian ladders that support collective public space and individual production.

Formally denied citizenship and engagement with the civic life of the city, the immigrant working class is emblematic of the condition of subjectivity in Houston. Their labor is exploited in support of agriculture and manufacturing, however, they are denied participation in the very economic system they support, unable to acquire debt or the benefits of public welfare programs. Instead, they survive at the boundaries of Houston’s economic and urban order, inhabiting housing and apartment blocks abandoned by the middle class.

The very notion of dwelling is inherently problematic for a migrant population. Those who migrate are leaving one place in favor of another; they are without a consistent home or territory. On the other hand, to dwell is to suppose a state of ownership, or a period of time or consistency required for a space to become a dwelling.

In an American context, land ownership and division are the hallmarks of dwelling. The city is divided into a series of subdivisions, which are then parsed into discrete parcels, occupied by single family residences. Even multi-family townhouses are located on their own lots, cast separately from their neighbors. People appear to live separately, although this independence is burden by the inherited determinations and norms of American domesticity.

The idyllic and assumed form of housing is the very vessel of inequality in our everyday lives. The space of the home is far from neutral, with gender specific labor codified and rooms parceled according to societal and functional norms. Instead of conforming to the lives of its inhabitants, it instead imposes a latent homogenizing order and exerts the role of the nuclear family structure in American society. The space of the home in its present state is far from being a place of refuge, comfort, or production. Instead, it is the source of additional stress, anxiety and tension as people attempt to dwell against their homes rather than within them.

As an alternative, this project offers a space that addresses the most generic dimension of human nature, its faculty to be productive. These dwellings are framed by a series of cast in place vertical concrete walls that assume the fundamental aspects of domestic labor: structure, vertical circulation and utility. Framian, the root of the word “frame,” literally means “to make productive.” By eliminating the interior walls of the home and concentrating the necessity of life-labor into the unitary frame, the space of the interior is completely freed to adapt to the demands and wishes of its inhabitants. Providing for the needs common to us all, these dwellings can be occupied by any constituency.

A 35 x 35 x 35 foot cube when built out, the individual cast-in-place concrete walls can support three levels of occupation. As a generic condition, the ground level would be left open to provide for outdoor spaces of leisure or production, with their attached kitchen gardens. One building could serve a single population, or it could be parsed up in any variety of ways, with a single floor providing a large studio for an individual, cohabitation for a couple, collective housing for a group, divided into different apartments, or a space for a small family. With utility hook-ups and infrastructure installed in the walls during construction, the entire floor area of the project is left open to adaptation.

These dwellings are sited according to a process of re-annexation in the spaces passed over in Houston’s ever-continuing growth. The lacuna, literally the unfilled space between and within neighborhoods, is the most visible trace of Houston’s leapfrogging based expansion. Whereas the gridded matrix of the 19th century city was designed to continue infinitely, the closed developments of the post-industrial city are characterized most by their lack of integration. As neighborhoods are built with their own laddered street patterns and by private interests, they are united only through necessity and their engagement with the city’s larger organizing spines.

Re-framing the present houses and neighborhoods, this project eliminates existing boundaries, and re-orients closed subdivisions towards a collective public realm. Appropriating the form of the ladder for pedestrian passageways, these new neighborhoods support kitchen gardens and a series of shared common outdoor spaces, while exploiting the existing utilities and transportation networks present on site. With a standardized repeatable metric, the building cores could be installed as a group and then occupied and in-filled as needed. Requiring a minimum investment to create, these walls lay claim to territory and provide a means to gradual construction, as resources become available and need grows.

The urban form of this project reflects the status of its subjects: both separate from and integral to the society in which it exists. Instead of creating a single large structure, these new neighborhoods register as legible urban form through their aggregation. In doing so, these dwellings provide the frame in which a group, like migrant workers, could assert themselves as a political and economic entity and collectively support the right to alternative forms of domesticity. At every level, from the individual unit to the collective dwelling and neighborhood, this project asserts the opportunity for generic inhabitation and the right of a man or woman’s actions to determine their own existence, free from the inherited burdens of domestic space and the forced destitution of the existing economic order.

Designed for the migrant working class, this project frames the existence of its inhabitants and offers a prototype for housing in America. As Houston is a paradigmatic model of 20th century urbanization, the émigré is cast as its archetypal citizen. Denied full economic opportunity or the benefits of the state, these workers are shackled by their inheritance, established domestic norms, the poverty of American urbanism and, growing economic inequality. As a frame for life, this project offers the opportunity to renounce our bankrupt citizenship and to begin anew. 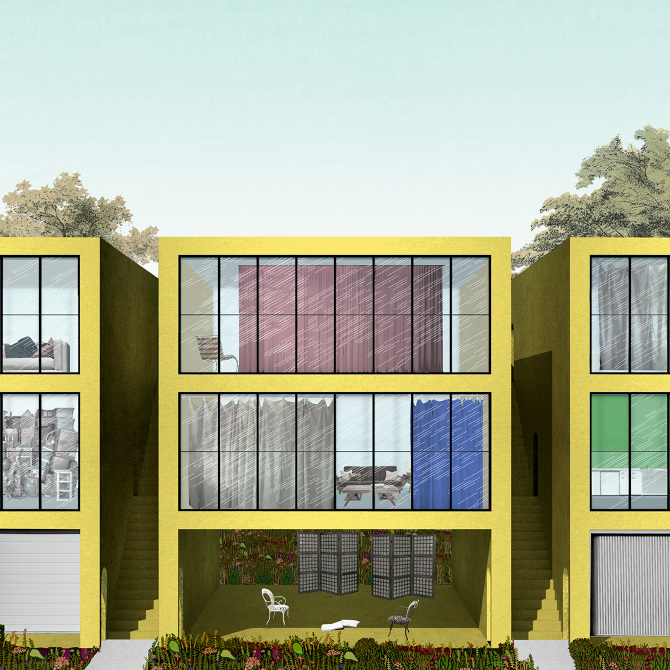 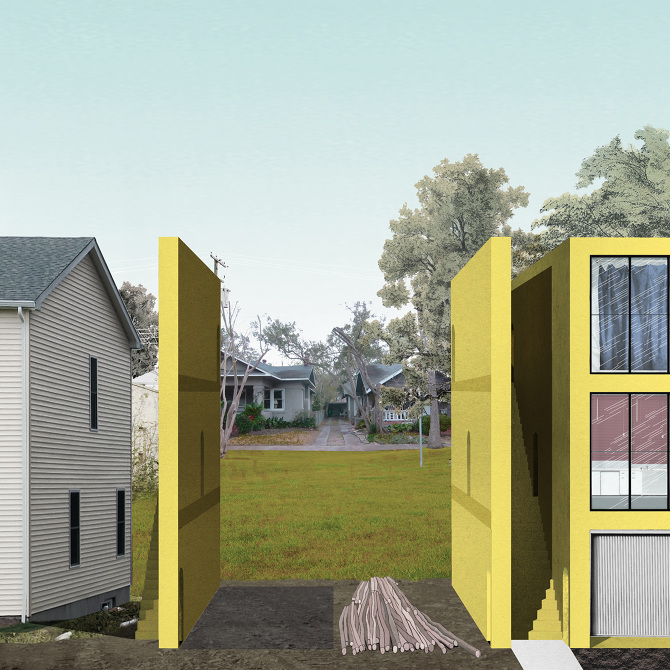 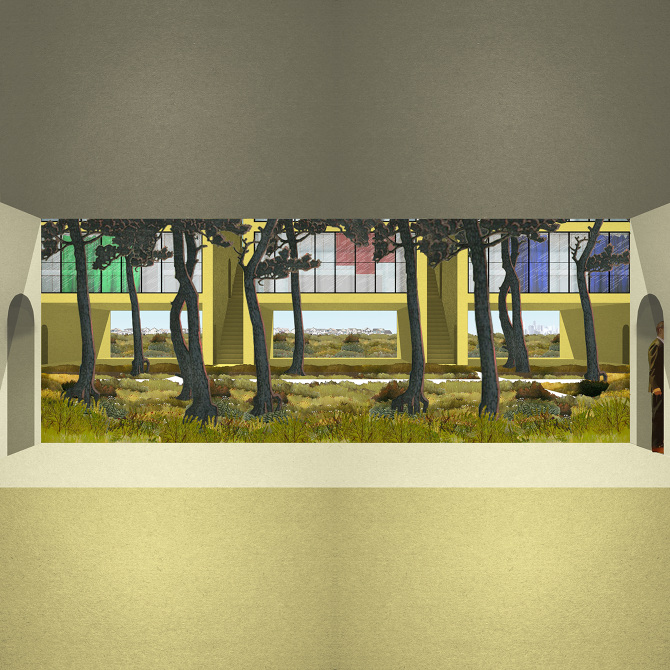 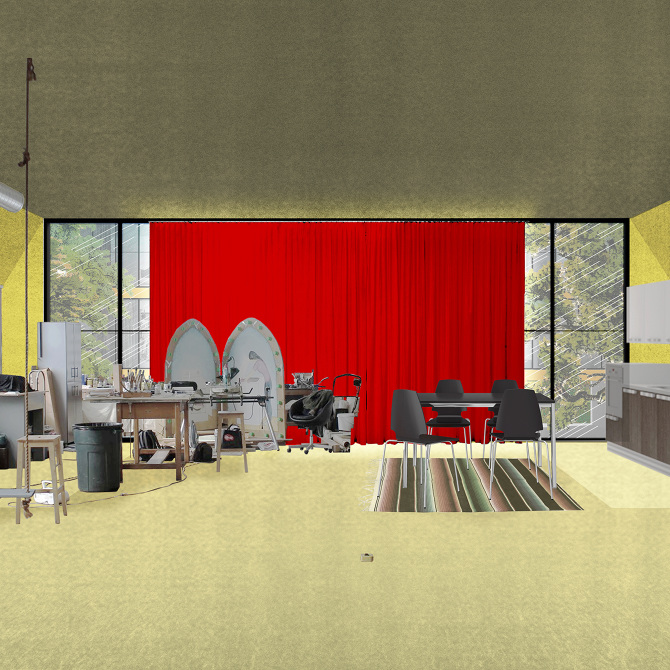 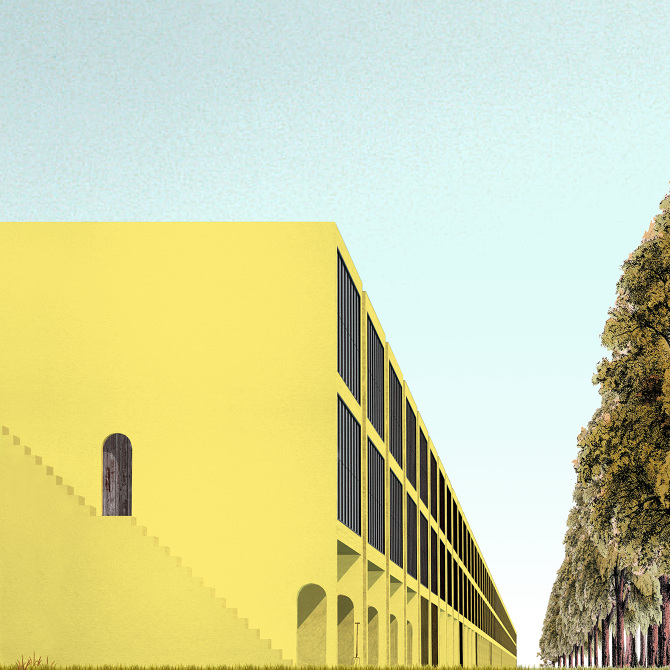 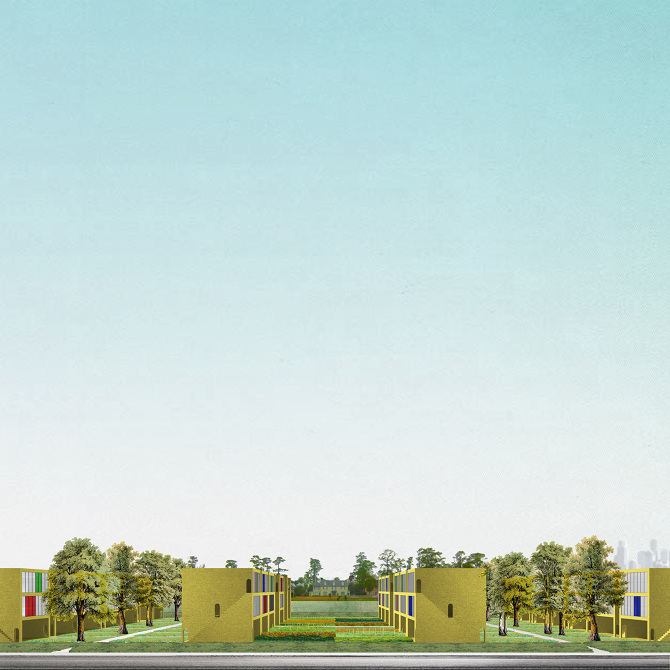 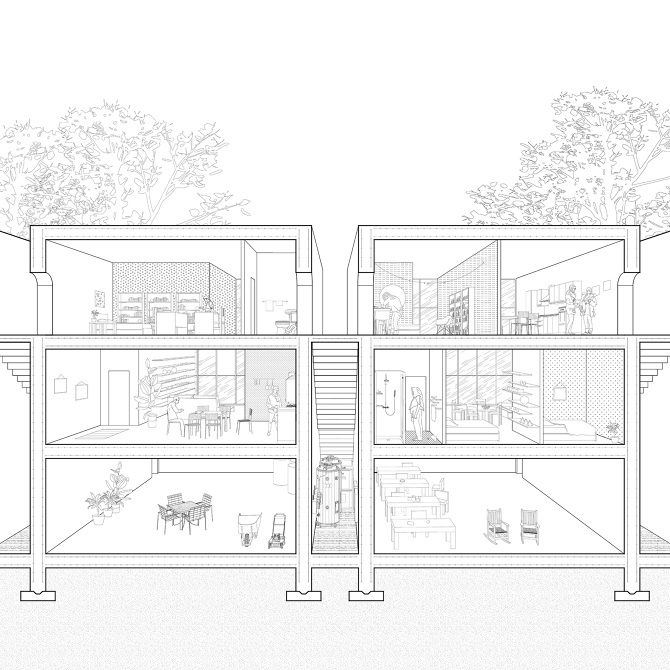 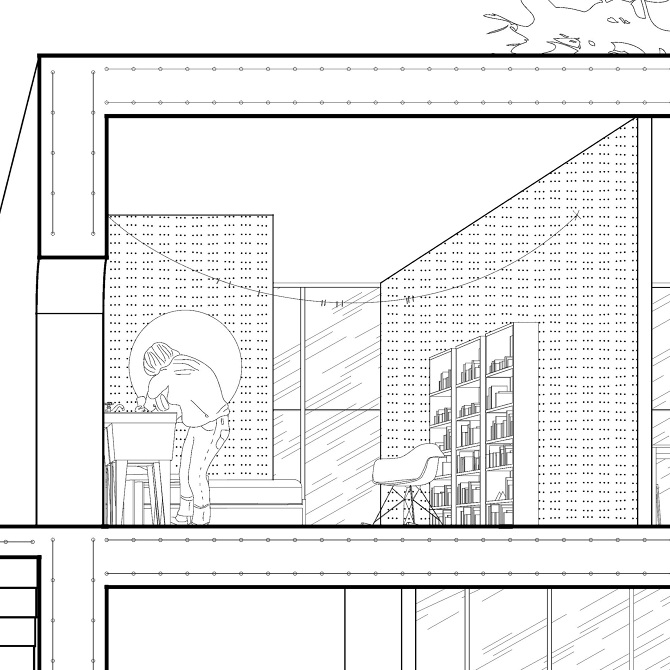 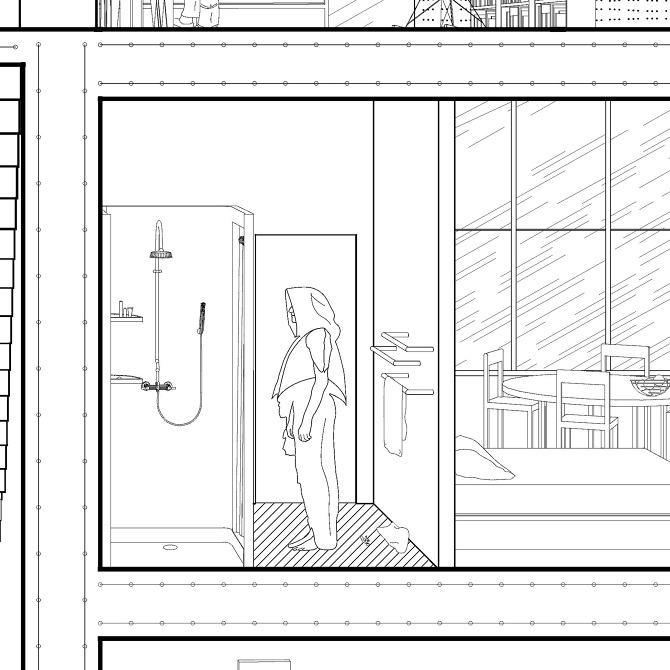 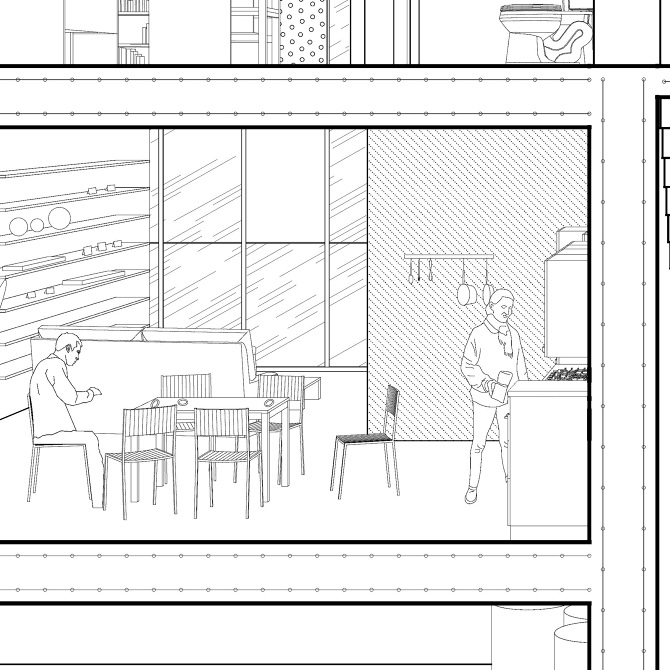 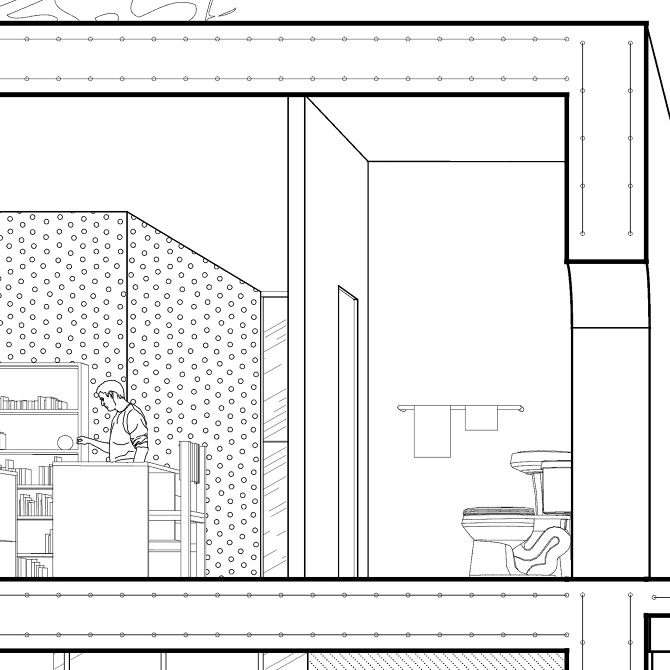 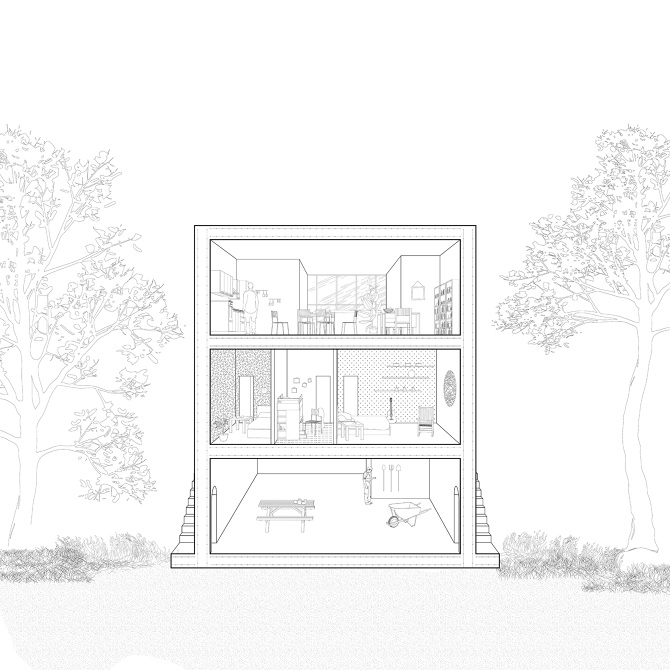 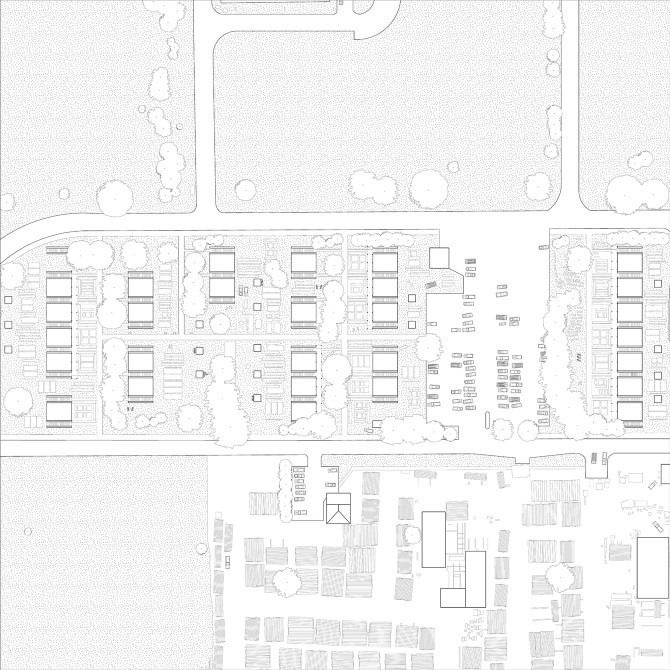 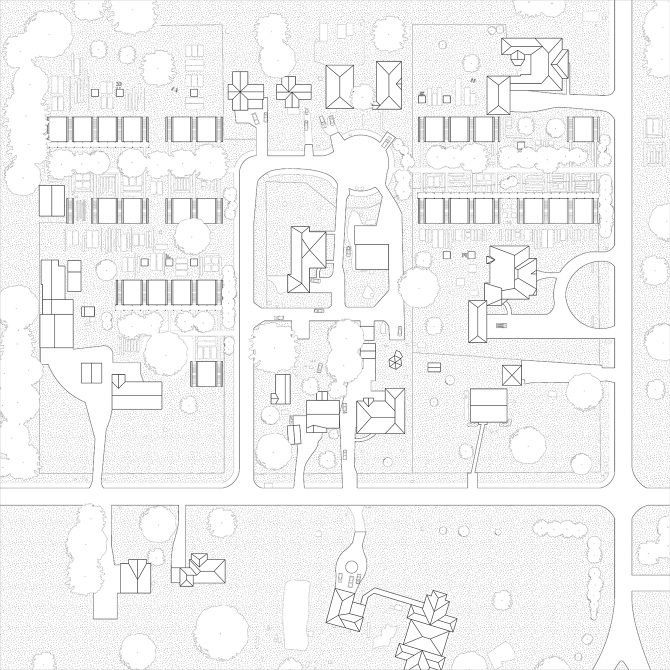 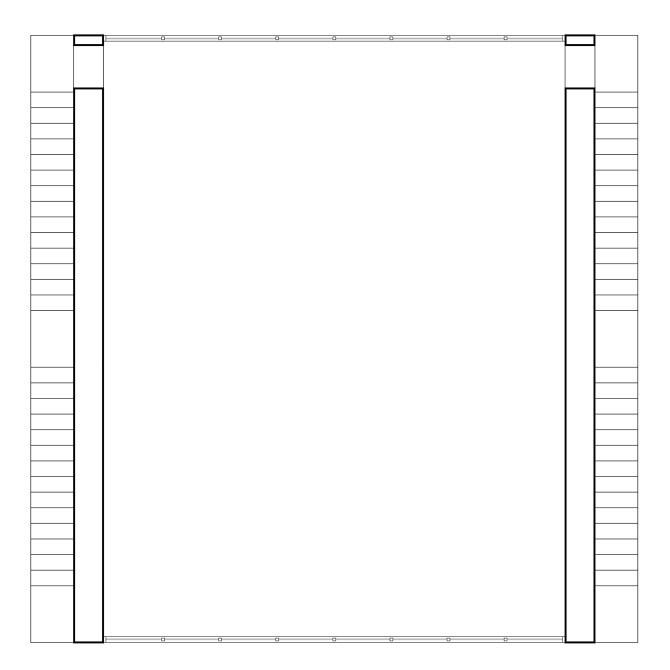 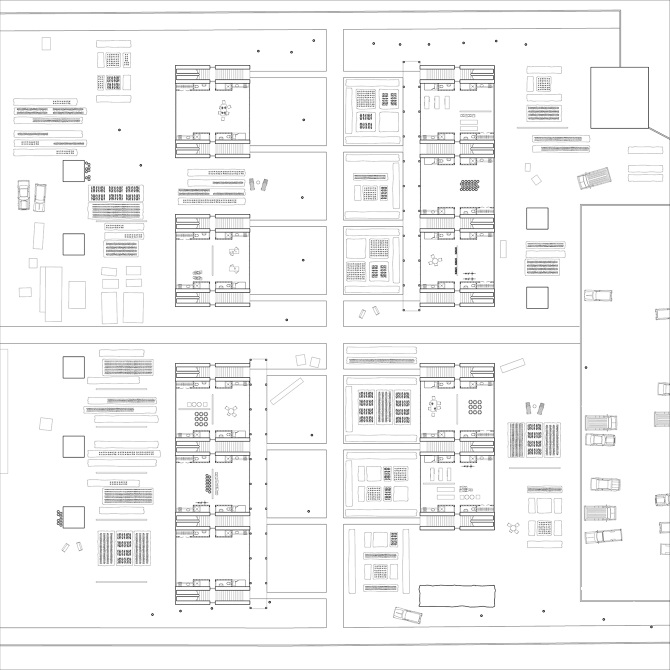