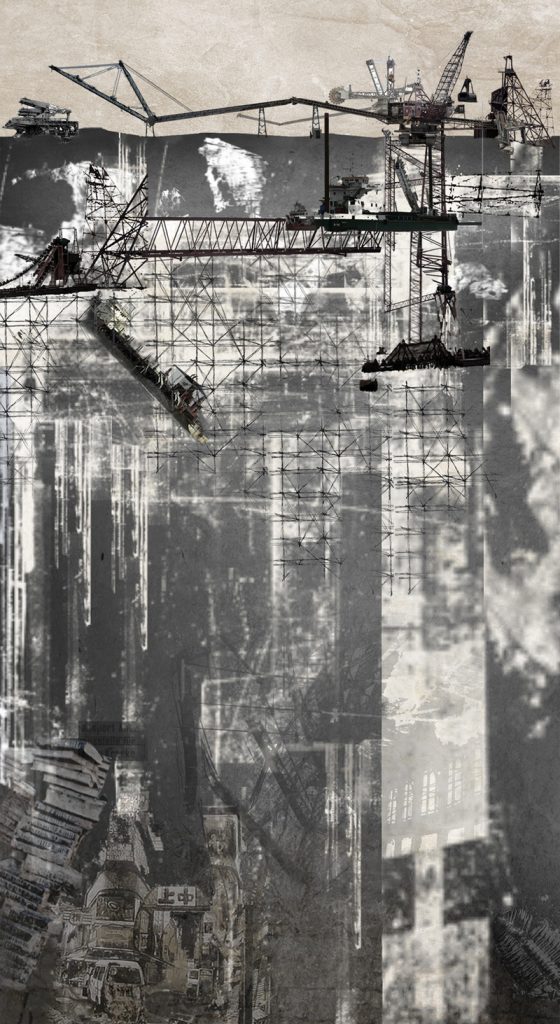 This is a true story…

Potagannissing Bay, at the base of the St Mary’s River between Canada and Northern Michigan, is home to innumerable islands, wildlife, and a major shipping artery. It is also the location of a spatial anomaly residing between the two countries. Due to miscommunications and faulty surveying centuries prior, a gap exists between the two countries. A gap, void of jurisdiction, ownership, and power. A gap of unclaimed water.

Due to the Great Lakes dropping 12-inches a year for the next half century, the land formations in Potagannissing bay begin to shift and grow. Islands became peninsulas, shallow water transforming into land bridges, and the beaches grew into several hundred yards of sand. As a way of keeping the shipping channels intact, dredging of the bay commences. For decades, barges and machines claim occupation of the bay like a swarm of insects along the glassy surface of the water. They slowly relocate the river bottom around the bay and begin building the unclaimed gap of water into a new piece of land.

Free of populations, global economies, ties to the adjacent countries, or any government, this land populated by dredging ruins became a highly sought after commodity. Some feared the site would be used as a front for production of illegal goods or weapons, damage the ecological condition, or some even feared terrorist occupation of the territory. After years of countries, corporations, and governments competing for the strip of territory in Potagannissing Bay, one major production and distribution company was chosen based on their plans to generate a new sovereign nation.

This attempt at sovereignty would be accomplished through the establishing of industry, history, and government within the nation. Through these methods a new territory was established and began feeding into the global index. However, after several decades, the corporation which had founded this nation could no longer remain competitive in the midst of global recessions and simply walked away, leaving the debt and population-free territory completely intact; a ghost factory of unoccupied and un-utilized land and architecture.

This now vacant territory began working on its own. The sand mine, through wind and solar power, was constantly crawling to different locations within the site, moving, adding, and taking land from different locations while mapping its footprints in its wake. This led the territory to be a changing and dynamic condition, arguing where the reality of the border actually lied.

The municipal building, generated through multiple methods of fabrication and skewed anamorphosis, was rebuilt and connected to the existing building while responding to the ground plane. As the ground continued to shift even further, the building took on an even newer relationship to the site. The ambiguity generated through the form and its relationship to the site questioned not only the municipal legitimacy, but additionally the possible roles that the government may take on.

Through lack of upkeep, the Historical Museum began to shed its marble finishes, exposing the reality of a false and counterfeited facade. The form broke away from traditional museum aesthetic and questioned the building’s functionality. The shifting of the site caused the museum to pull up and away from the ground. This challenged the legitimacy of its ability to convey a truth and history since it became inaccessible. One could even begin to see the sand mine and the constant manipulation of the site as a form of curating the museum. The appearance of a reliquary space of historical evidence and artifacts simply remains in actuality a deteriorating form with no access.

As a result of its global status, the territory became a utopia consisting of history, industry, and government. The nation boasted no debt, crime, unemployment, divorce rate, and no conflicting nations. These statistics had skewed the global index and generated a legitimate international footprint through false means. The development of these programmatic beings within the territory blur the reality between what was once a strip of water, and what is now seen as an authentic nation. They both legitimize and call into question the motives of the territory as a whole.

Ghost Factory (a fictional narrative) is a territorial condition created through pseudo-natural environmental processes which work in multiple fashions to convey levels of legitimacy and spatial rigidity while subtly alluding to possibilities of ulterior motives. This condition utilizes architecture as an extra-territorial deceiver in its ability to re appropriate a space and influence larger audiences. This project explores the possible roles that architecture may play in the 21st century and how the discipline may begin to explore the use of architectural design and presentation through duplicitous conditions. Ghost Factory contends that architecture can be re-imagined and reformatted to convey levels of duplicity, false legitimacy, and blurred realities. 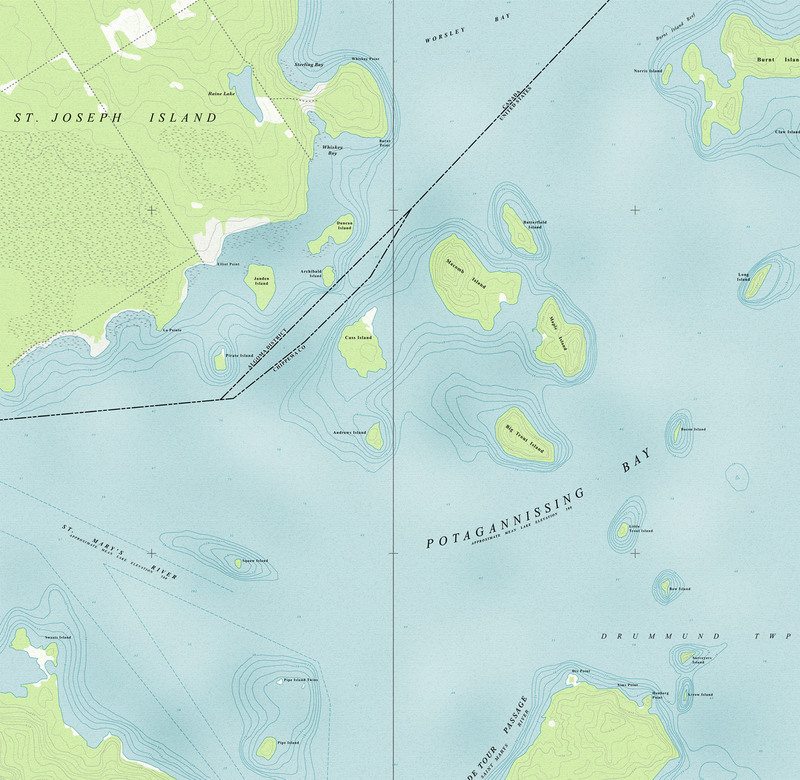 The existing map and conditions of Potagannissing Bay 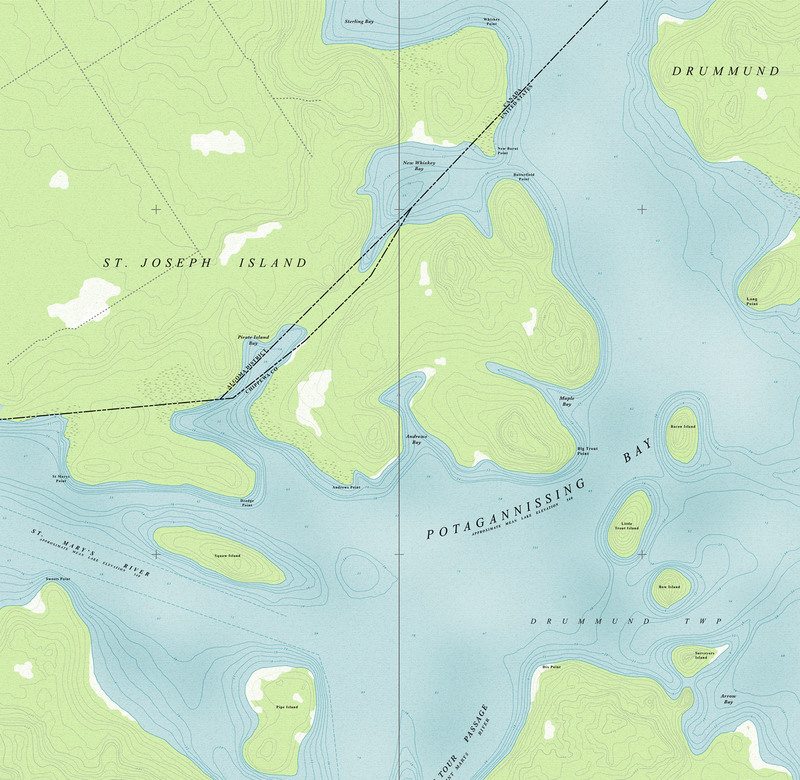 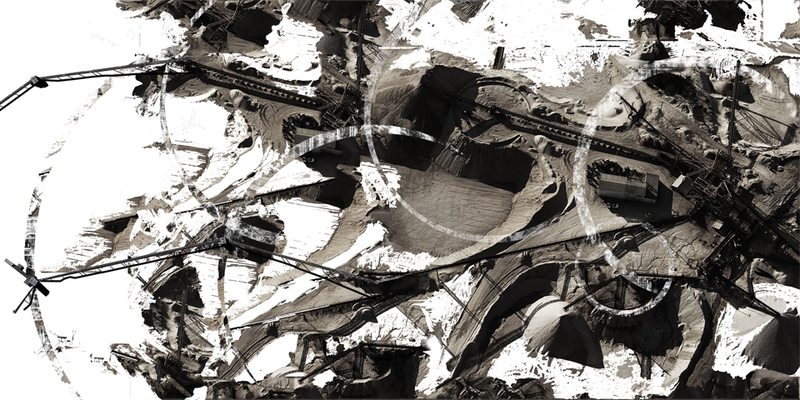 Aerial view of sand mines, their structure, and their imprinting on the site. 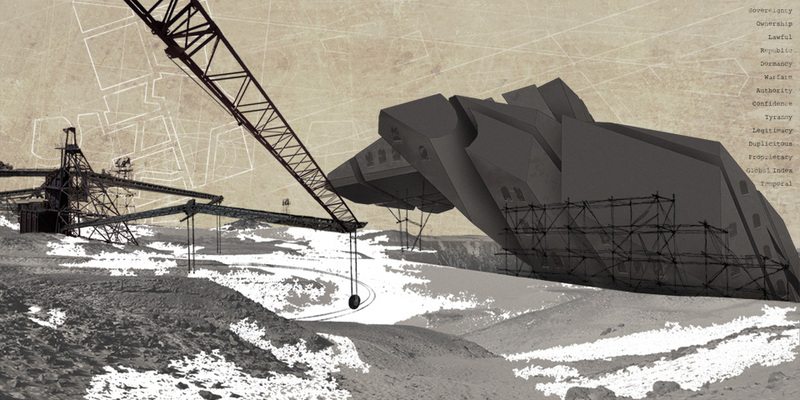 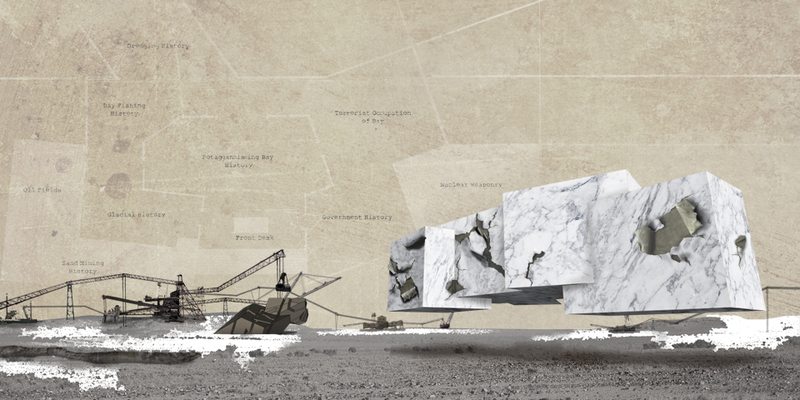 Museum building on the site. Contains artifacts, government documents, art, and history of the site. Made of faux marble which is beginning to weather. 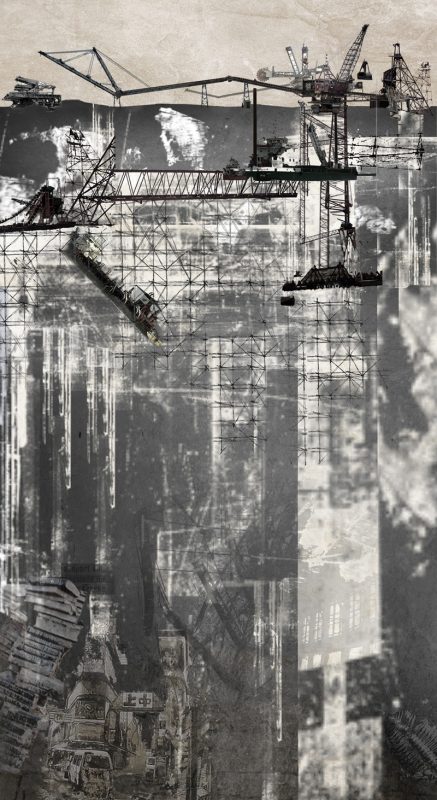 View into the layering of the site over the centuries. Site containing history and machinery, telling the story of its creating over time. 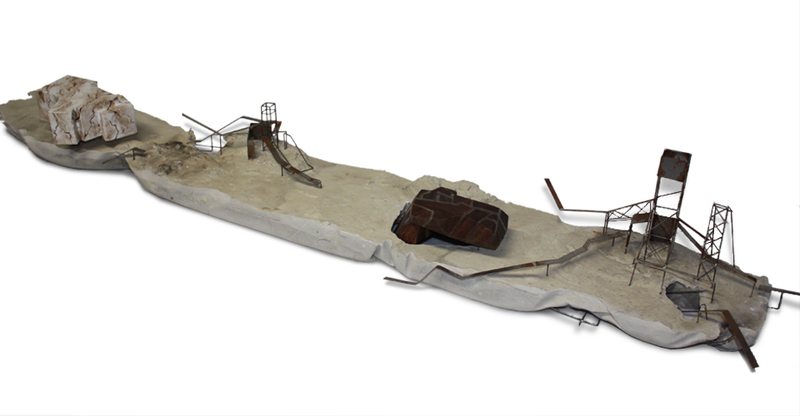 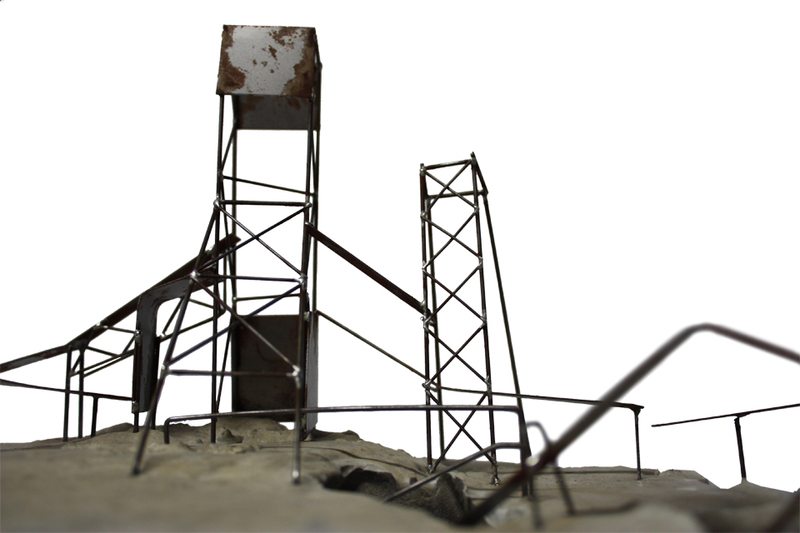 Close up of the sand mine. Materials: steel, rusting agent 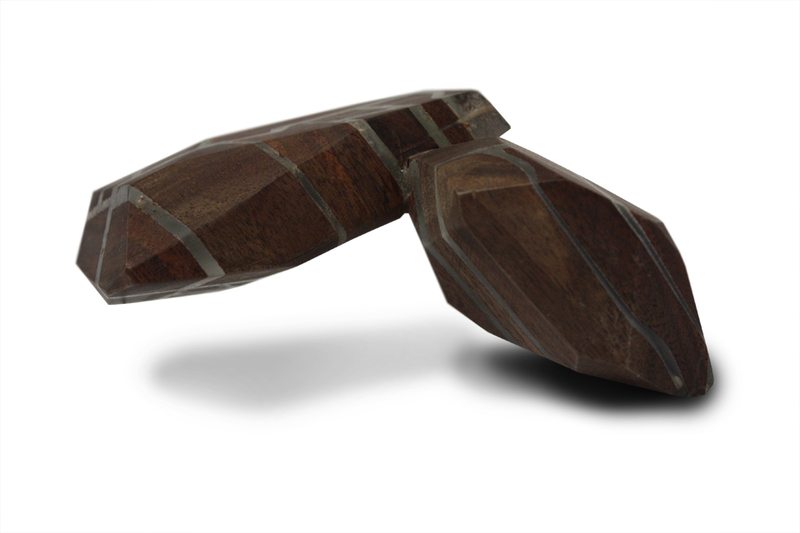 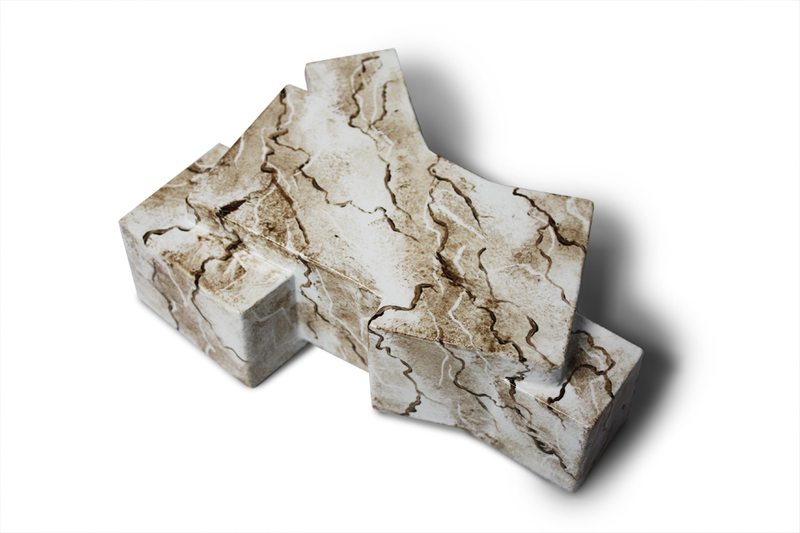 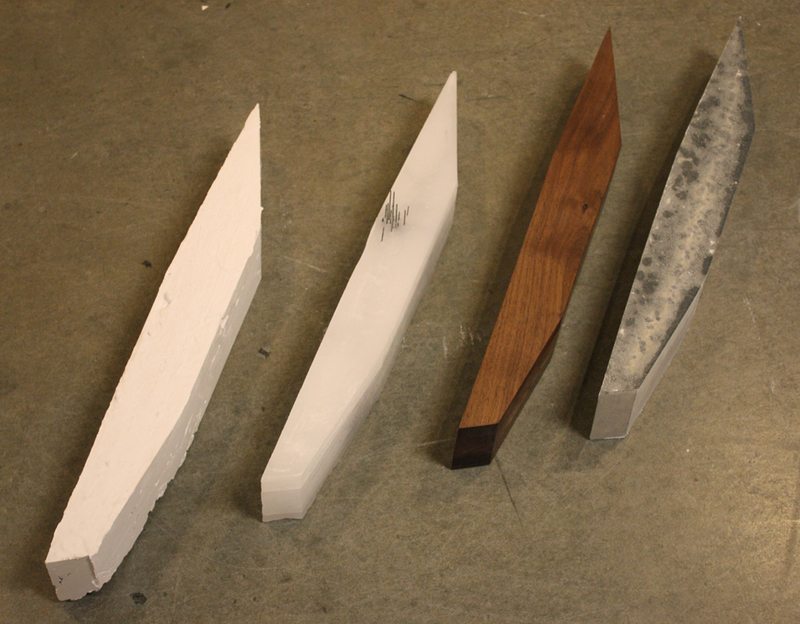 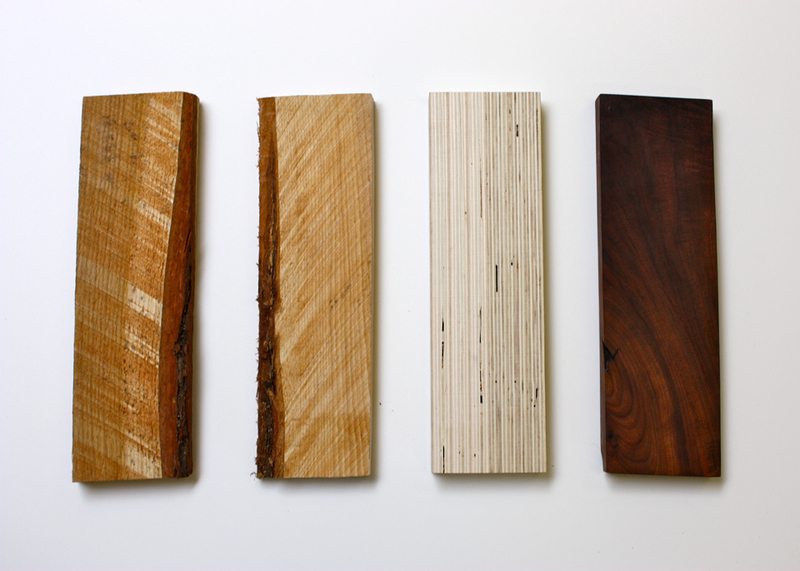 The ‘Wood Block’ was a study in authenticity and counterfeiting in which an original piece of wood was replicated, copied, engineered, and/or made out of a higher-level of material. The study was meant to evoke the question of the authenticity of the counterfeit and how a replicate can feel just as real, if not more so, than the original.