Darwin once commented that the control over fire, as one of the earliest technology acquired by human, was “probably the greatest (discovery), excepting language, ever made by man”. [1] With fire, humans are able to defend themselves against natural weather and danger as well as to nurture. The role of language, in Darwin’s comment, is even greater than fire. With language, humans can exchange ideas and emotions through visual, acoustic, or haptic means of perception.

Fire can be considered as architecture without built form. As is discussed by Jonathan Hill in Immaterial Architecture, architecture, at its primitive, is the human’s attempt to edit natural weather for the ideal weather. [2] The intervention is reached through materials, while the environment itself is experiential, sensual, and immaterial. The traditional approach is to build a building skin and to create an interior, which results in a static building object. Our contemporary weather, according to Hill, also consists of electromagnetic weather, which breaks the boundary between interior and exterior. The technology relevant to electromagnetic weather today, such as light, television and computer, has a more powerful impact on human experience — it is a further step towards the unnatural. The experience has been flattened with a blurred line between the digital and the real, and we are able to collapse time and space.

Cybernetics theory is the fundamental to the digital technology today. Gordon Pask’s conversation theory has expanded the “species” with which we communicate. In this dynamic process, human and machine learn from each other. [3] In the case of human-computer interaction, human is in “conversation” with a physical machine that gives constantly changing output. The conversation is a series of translations: we click the mouse and the touch is translated to electromyography signals, which are sent to the computer, where it is processed and output as the pointer movement on the screen. In this dynamic system, both the human and computer are the observant. Hence, in object-oriented ontology, computer can be considered a species that can perceive, think and communicate. The system can be seen as tenuous units operating and communicate with each other. [4]

Having our surrounding weather and species expanded, we are able to conceptualize architecture and ecology in a different way. Through the lens of weather, some technology has the same abilities as traditional architecture has: a screen provides us a view similar to a window and an air conditioner adjusts local temperature similar to a building facade. These species construct the architectural experience in the space. This is an expanded ecology that approximates architecture without an actual building form, which allows the space to change over time in a more flexible manner.

Humans can live without an actual house. Instead, we live with automated and responsive species that edit weather to create spatial experience. If we push the situation to an extreme, these species are not limited to machines; they can be made of flesh as bioengineered products. In this sense, they are real species created by human. This will take domesticity to a new level, where these species are equal to us as family members. In this designed ecology, they originate from one single stem cell, which grows into an incubator, and then its parts differentiate into different species that function together to raise a human child. Without building form, we live in the landscape again, with a piece of land temporarily domesticated. These species operate in both physical and digital means. Some species transform the landscape to fulfill programmatic needs, some species act as infrastructure, and some species create electromagnetic weather. Human is perceived by the micro ecosystem through physical form, neurons, blood content and brain wave, etc. Such information is translated to describe his/her needs and desires and the responses of the species are generated accordingly, which is then perceived by human. This way the system creates a feed-back loop like a computer. Besides, a construct is made to render the experience created by the natural weather, electromagnetic weather, the virtual and the physical in an analogical manner. 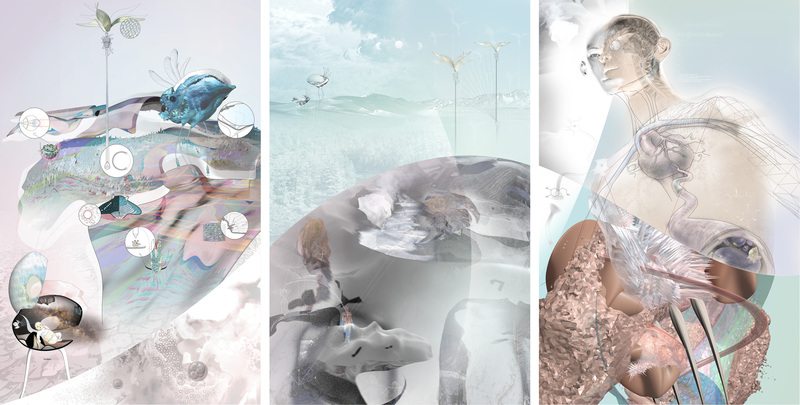 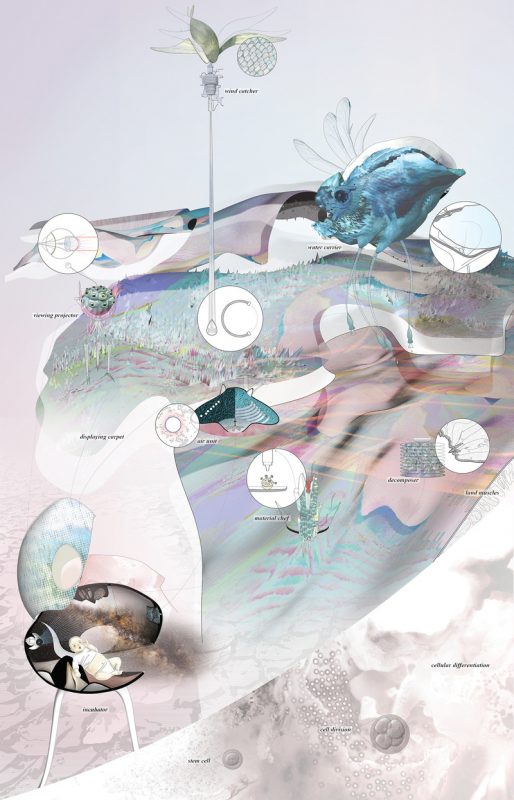 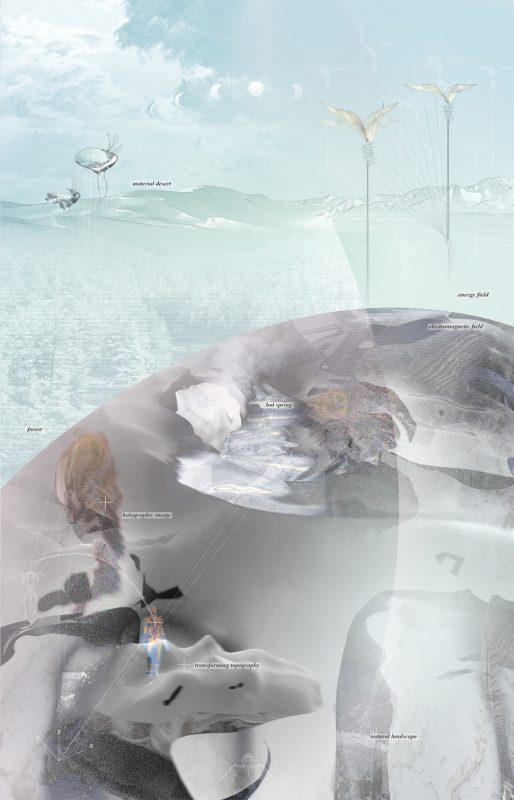 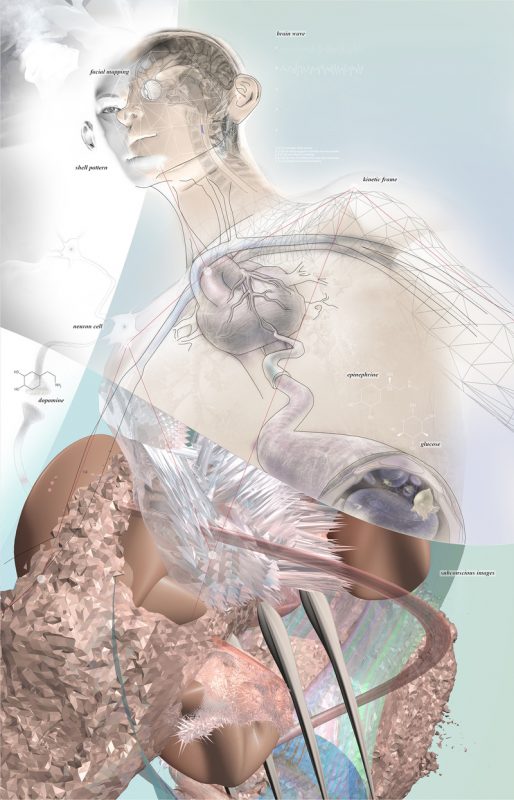 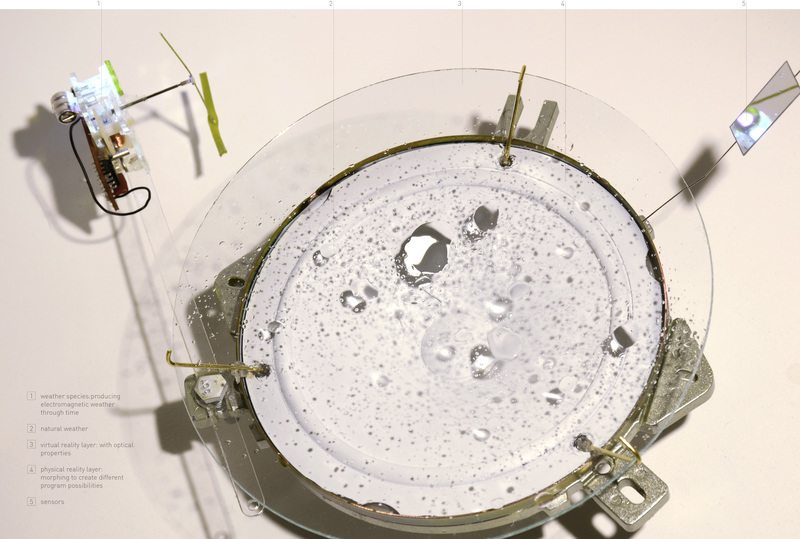 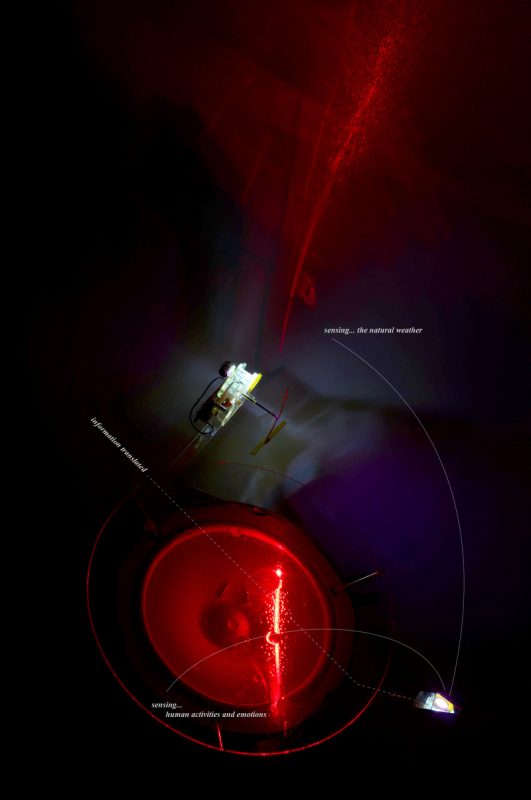 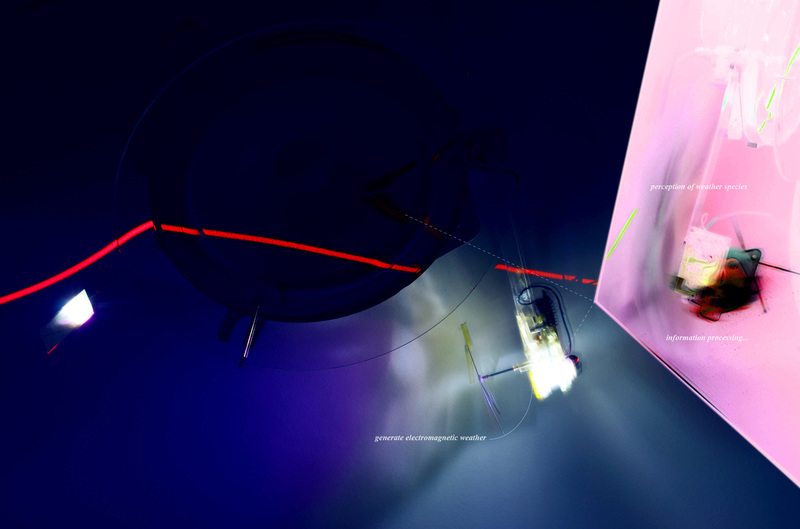 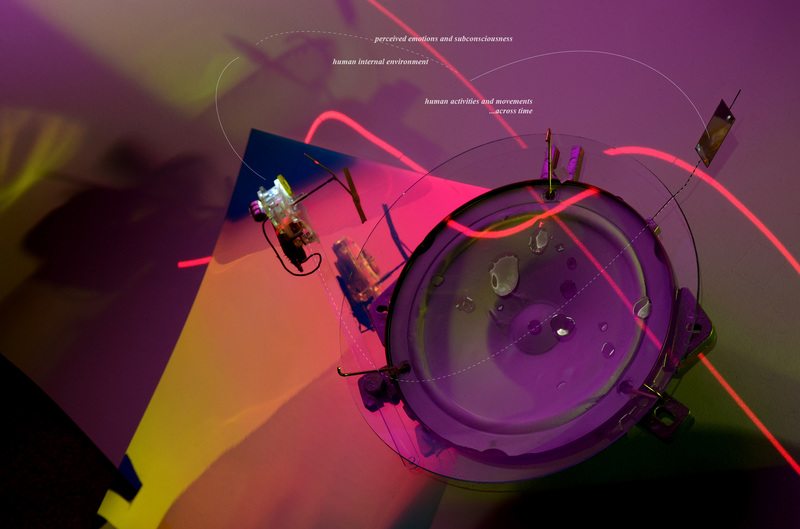