The aim of the project was to create a mixed-use research complex that acts as an integral node of the multidisciplinary field of marine sciences in Alexandria for both public use and research use. Simultaneously this project will increase the city’s environmental awareness and help in the conservation of the marine environment. The complex grounds are located to the east of Abu-Qir’s waterfront and cover a surface of 148,000 square meters.

The complex is entirely driven by marine sciences, composed of two key elements: public zone (museum) and research zone (research buildings and fields). Both zones are linked by an outdoor green area, acting as a transitional space between the two main zones. Despite the different use and construction materials of the two zones, both are linked together with a common main structural grid. Extensions projected from the boundaries of each research building were used as guidelines for the museum’s grid.

An outdoor structure of trussed frames partially shrouded with aluminum panels is built over the transitional space to form a semi-enclosed space, at the same time increasing the cohesion between the two zones. As a result a dovetailing compound of buildings is achieved.

PUBLIC ZONE
The marine museum plays the role of the public zone; this zone is the representative side of the complex to be experienced by visitors. The museum is a mega-structure of trussed steel frames cladded with lightweight steel panels forming a free-formed structure, reminiscent of the smooth body of a marine organism. The entrance to the marine museum is reached from an ascending ramp starting from the parking lot (ground level 0.0) to the museum doors (+3.8 m). The main museum features are the IMAX Theater and the three exhibitions. Each of the three exhibition zones are dedicated to three different stages of marine pollution; the effect of pollution on water, marine biology and marine geology respectively. The IMAX Theater is the first feature (optional) the visitor experiences. The visitors’ journey begins from the escalators to the first zone; water pollution. This is demonstrated in the form of water tanks and screens. Like a labyrinth the path winds its way through descending ramps towards the second stage; marine biology. A variety of situations emerge in the form of water tunnels, fish tanks and organism fossils. The visitor experiences various types of organisms from invertebrates to marine mammals. Finally the visitor leaves the second zone down to the third zone by escalators. The third zone; Marine geology, consists of models of wave generators and hydraulic structures. Mineral samples and a fossils cave are later experienced. A restaurant/ cafeteria and a souvenir shop are located at the end of the museum; both can be reached after the journey ends. When the tour finishes, visitors exit the building through a ramp going back to the main hall through an exterior glass tube-like ramp.

RESEARCH ZONE
The research zone consists of three research departments; water quality dept., marine biology dept., marine geology and hydraulics dept., outdoor research area, marina and a multi-purpose facility. The research buildings are strategically allotted close to the shore, due to their critical need of direct seawater access for research procedures. Each building is flooded with natural light from the generous amount of glass windows throughout the building and from the central atria. 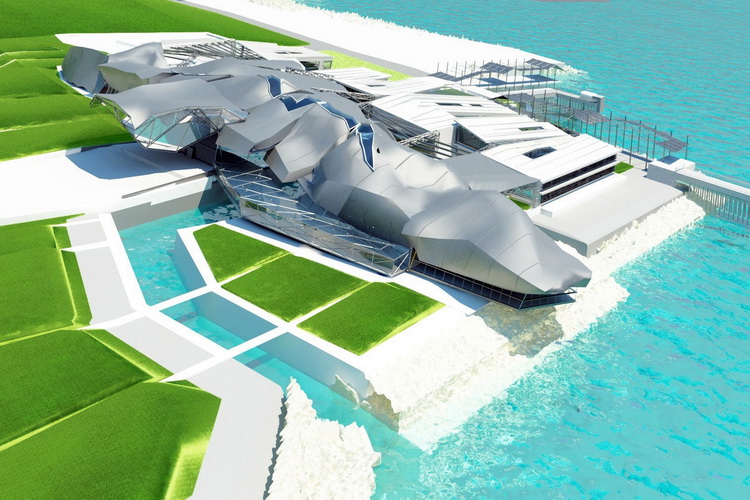 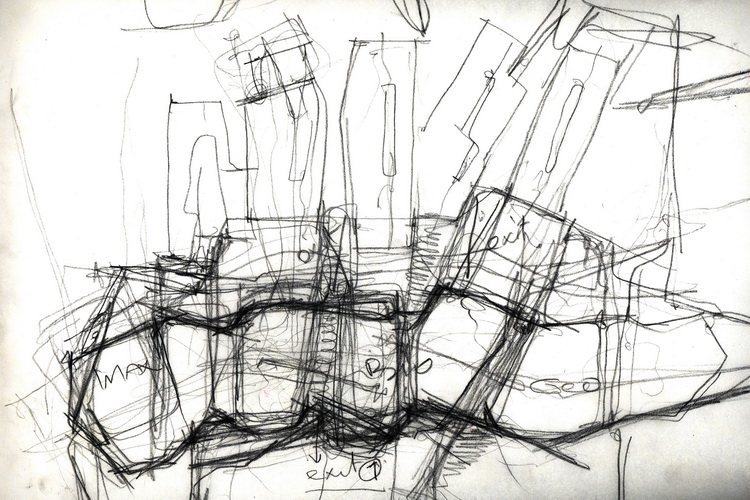 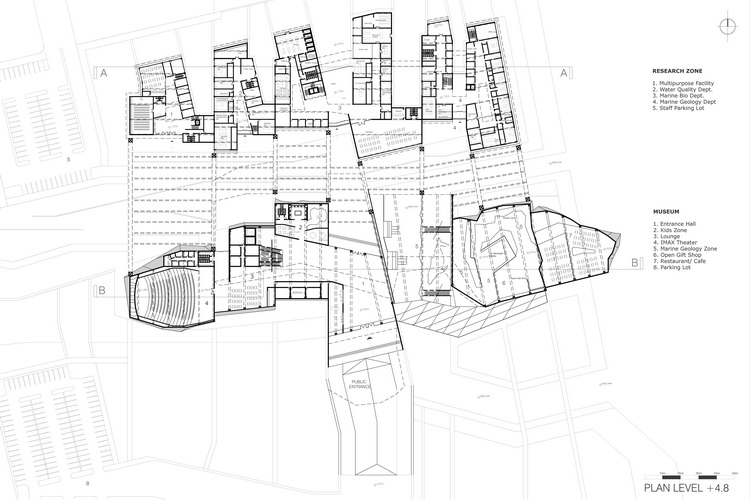 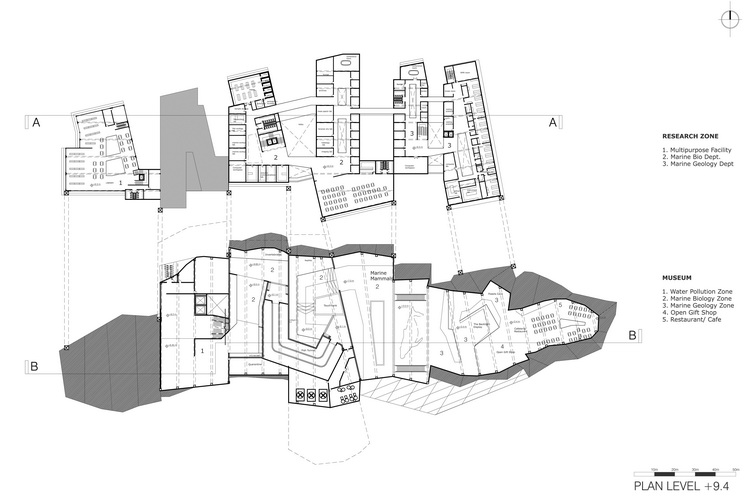 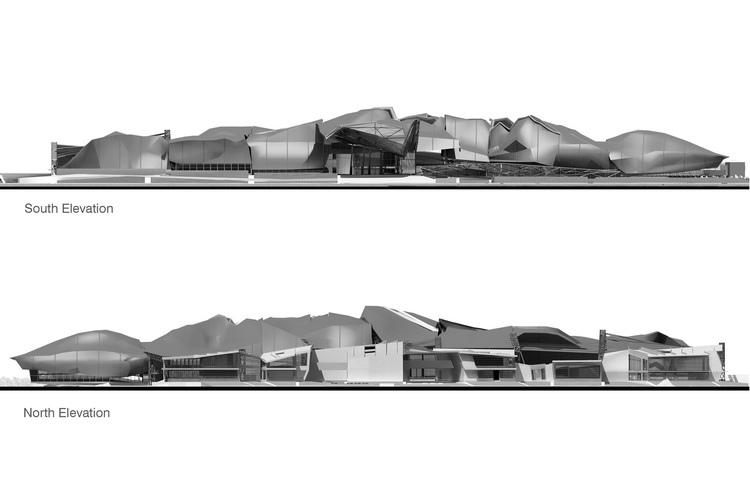 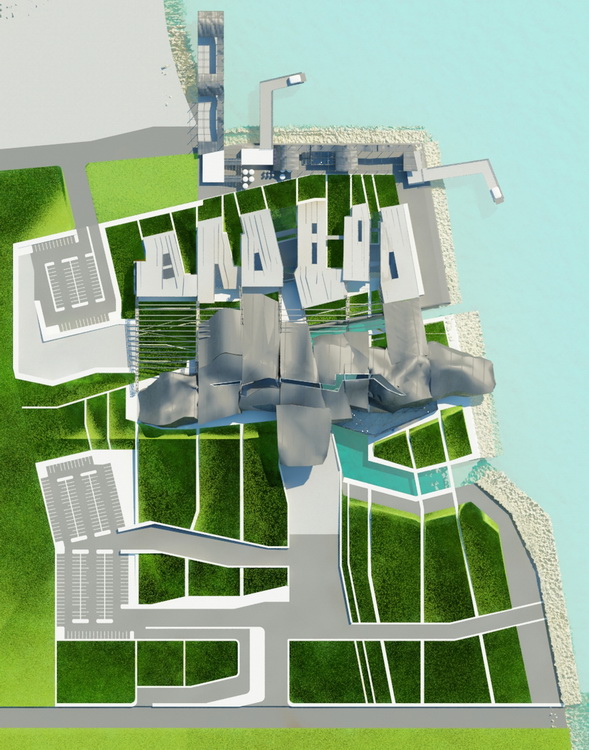 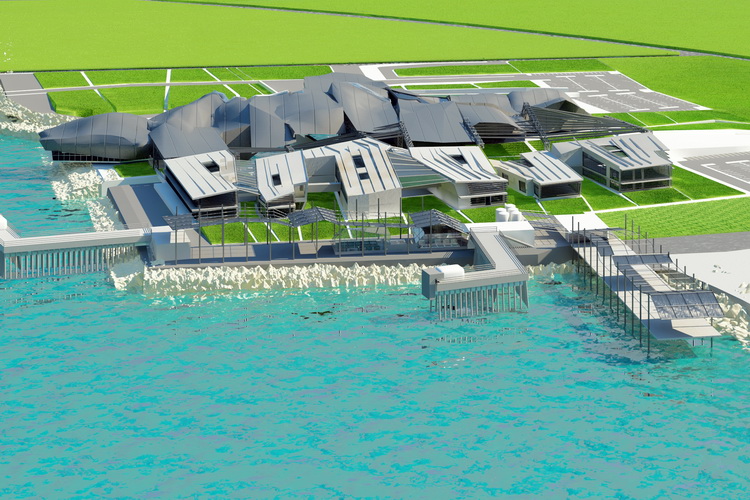 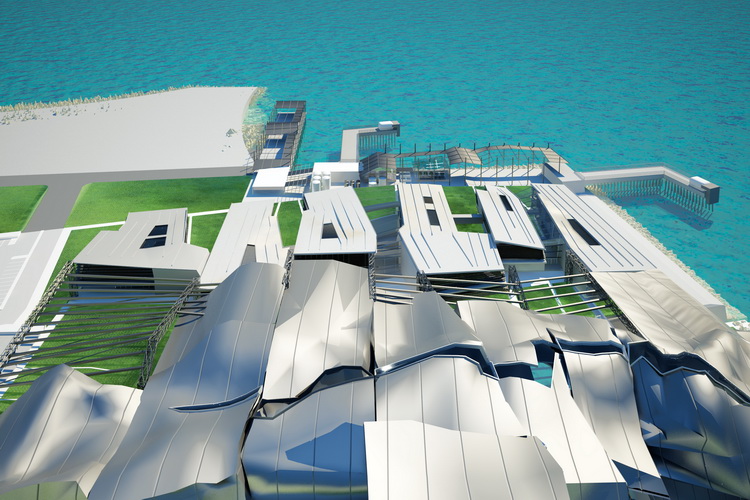 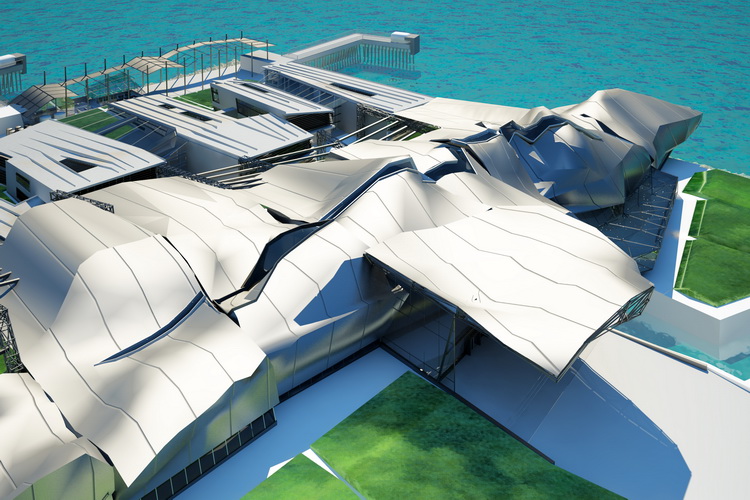 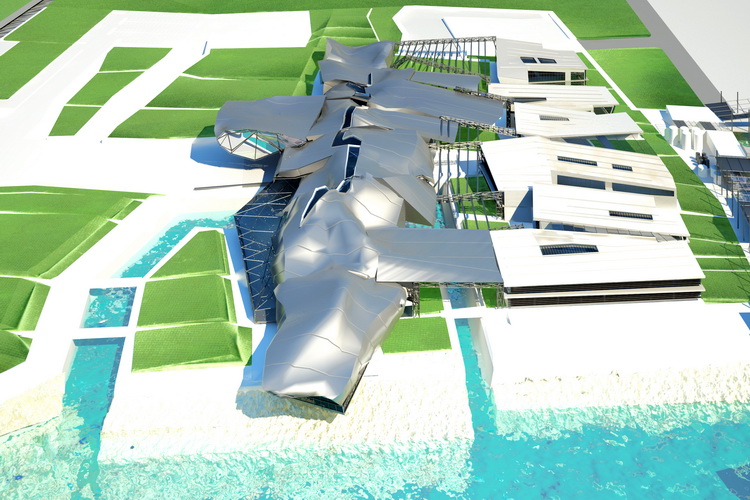 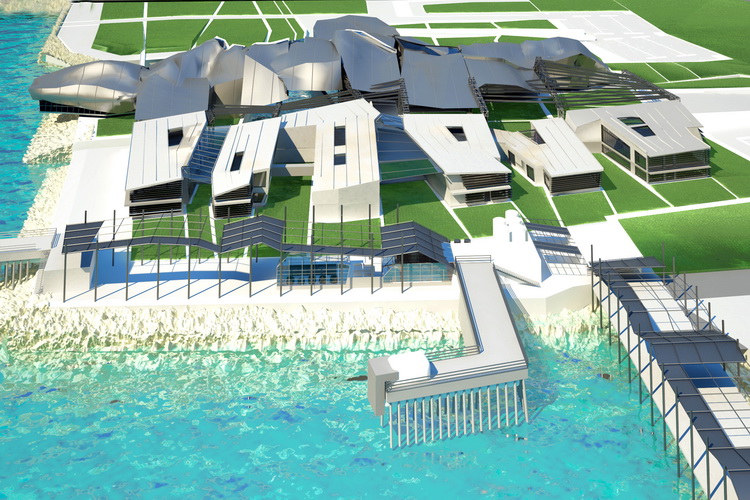 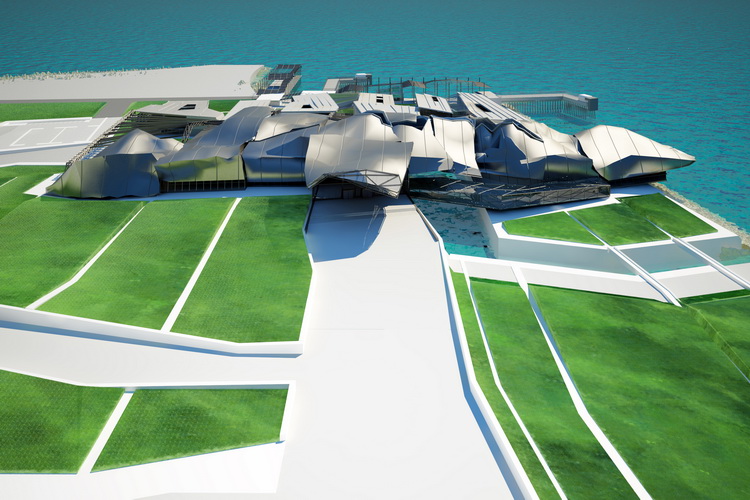 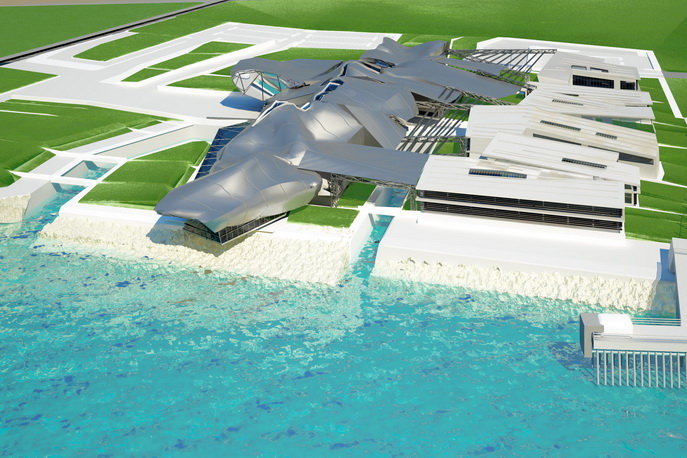 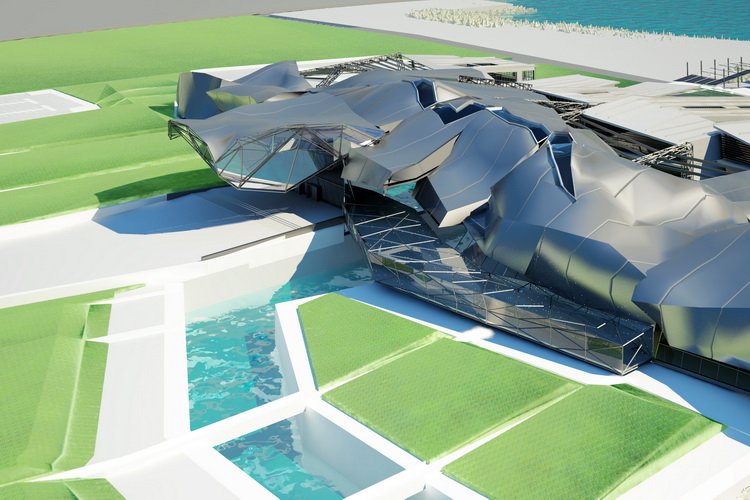 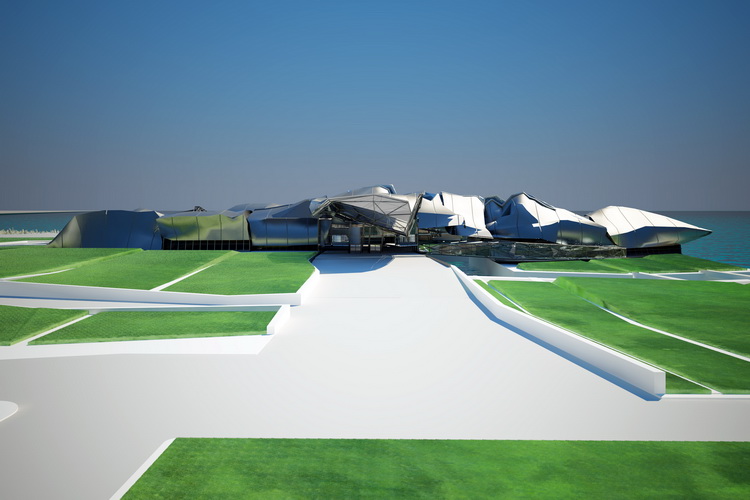 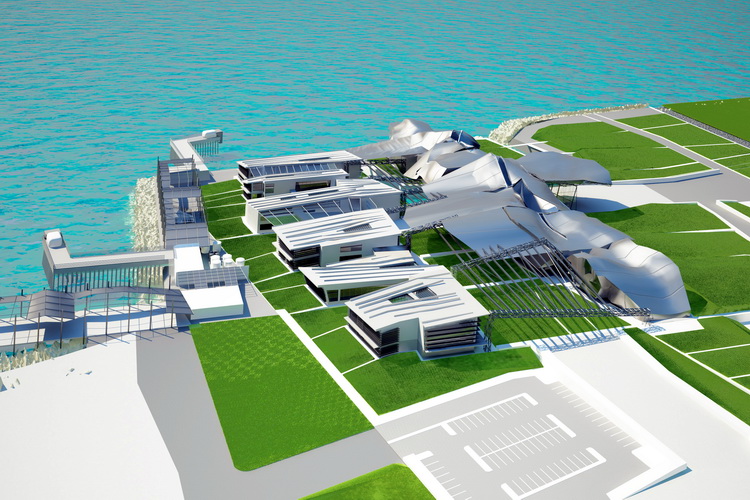