“But in Ovid’s text it is not Medusa’s ‘head,’ or even her gaze, that petrifies. Rather, it is primarily her silenced ‘face’ or ‘mouth (os, oris) that does its enigmatic work.”
– Enterline on Ovid’s Metamorphorses

Considering the incongruous formal relationship between cohesive wholes and random piles, this project is interested in the possibility of multiple and paradoxical readings within the monolith. Rather than assuming the mute iconicity of the architectural monolith as a lack of articulation, blankness is defined in terms of multiple and contradictory part to whole relationships as described by Kipnis’ concept of Intensive Coherence— further recalling his account of Frank Gehry’s Vitra Design museum.

The monolithic arrangement is additive rather than subtractive, such that a heterogeneous yet cohesive whole suggests no single dominant in either the organization of the initial massing, the internal volumes, the wrapping of the envelope or the dematerialization from the the texture. Multiplicity through layering produces an unstable and ambiguous dialogue between inside and outside, background and foreground, vertical and horizontal. The Medusa-like form distorts and dislocates elements which “seek to engender shifting affiliations that nevertheless resist entering into stable alignments.” (Kipnis, Towards a New Architecture). While these elements keep the reading of a theatre at each elevation, they are otherwise contradictory; this explores the idea of a consistent yet heterogeneous interior and exterior. The misalignment and miscoupling of the original organization of primitives attempt to create a reading that is both and neither part (pile) or whole (monolith). 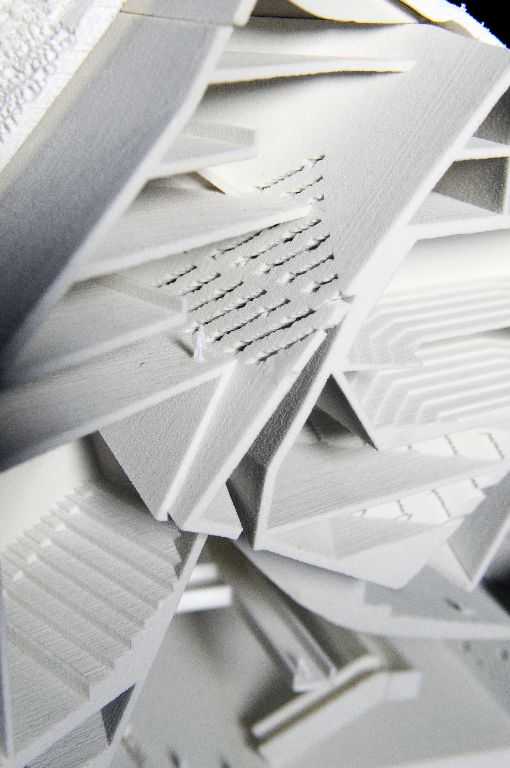