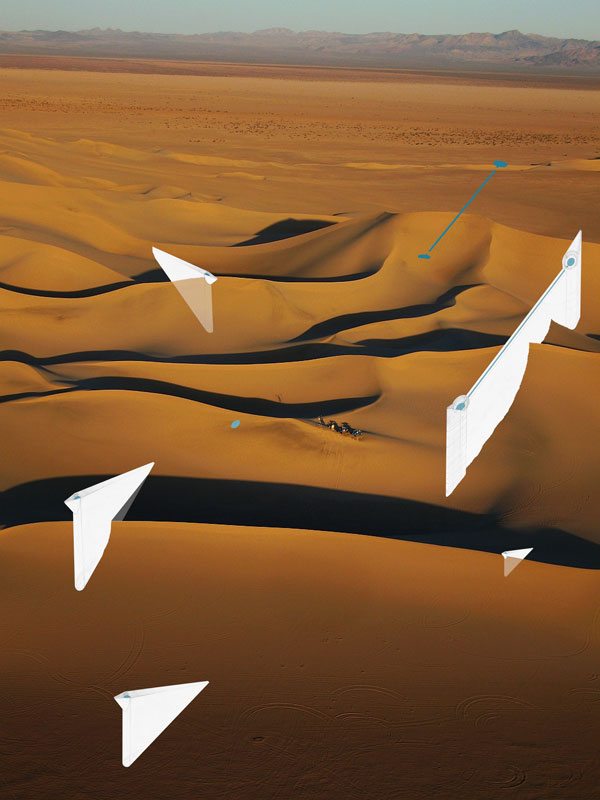 The Sonora Desert connects two countries fictitiously separated by national boundaries. The border is porous and dynamic as it drives across the natural landscape. Some areas have erected walls of steel to deter north-south movement. Other areas, like the Sonora Desert, require no physical intervention because the landscape itself becomes an expanded boundary. Thousands of animals, people, insects, and plants are transient residents of this harsh landscape despite the invisible boundary that severs the landscape. The land’s manipulation becomes the indicator of the border: thirsty agriculture from the south butts to the edge of the border; grazing laws cut gradients of plant life in half; sand dunes erase the straight line as the wind incessantly moves them south; cities terminate abruptly against fields of saguaro cacti; mountains deny rectilinear demarcation, too dramatic to trace the line; water from flash floods flows south in a webbed-network of desert washes. In order to facilitate and continue movement through this dynamic and invisible border, water is the main catalyst. The border cuts through multiple site typologies that present various water scenarios: water tables beneath porous sand dunes; “high tanks” made from years of erosion collect water in the mountains; saguaro cacti water collection via “atmospheric” moisture collectors (spikes); manipulation of lava rocks to sustain soil moisture. All of these scenarios create a montage of architectural interventions that would emerge over time and serve as loci for hydration. 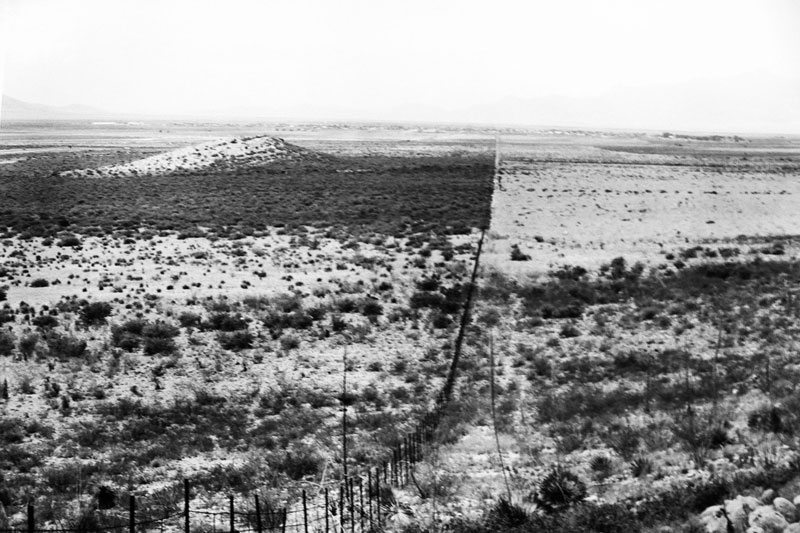 because of careful ranch management, grasses survive in the Animas Valley on the United States side of the line (to the right). Overgrazing on the Mexican side encourages Creosote bushes to replace the grasses. This view looking west from illustrates the visual irony 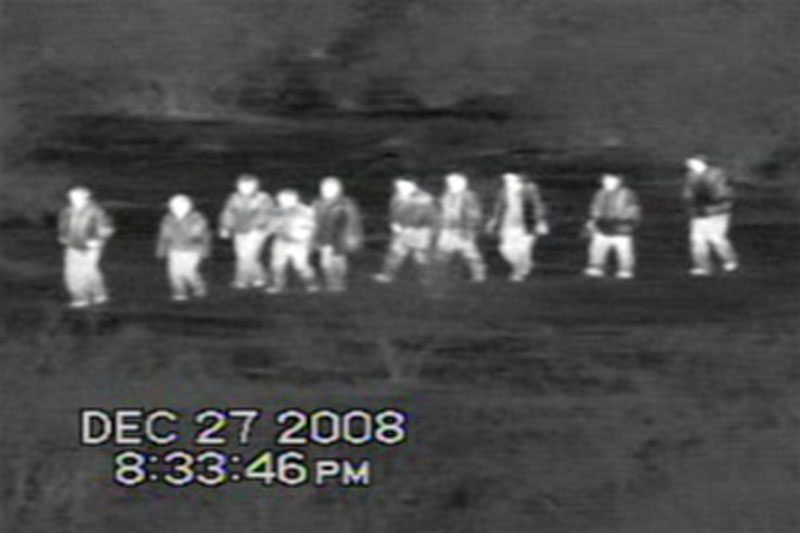 in some areas, the physical wall is replaced by technology. Infrared cameras, seismic detectors, and other technological gadgets create a virtual border 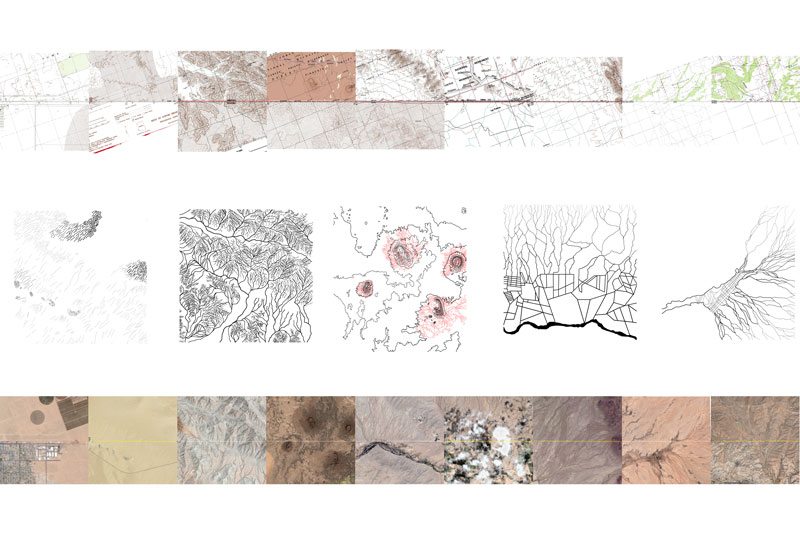 mapping of the border in areas without a physical wall. the border has many faces: sand dunes, mountains, ancient lava fields, and agricultural opportunists 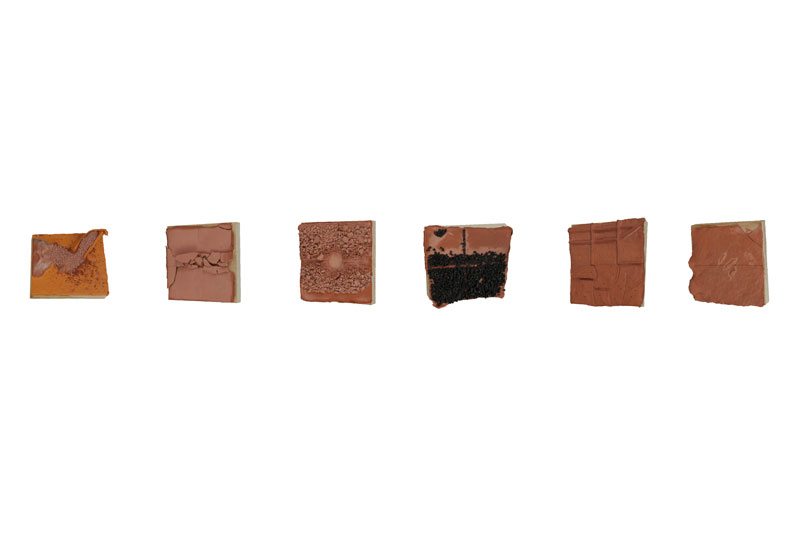 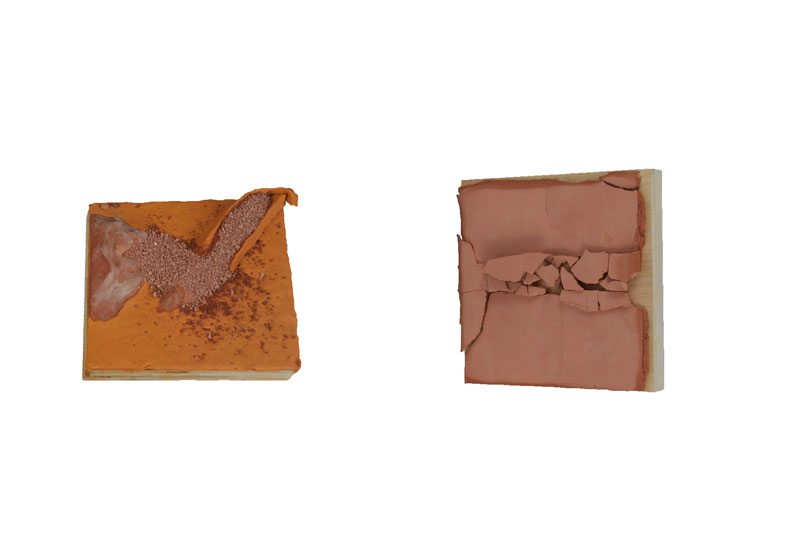 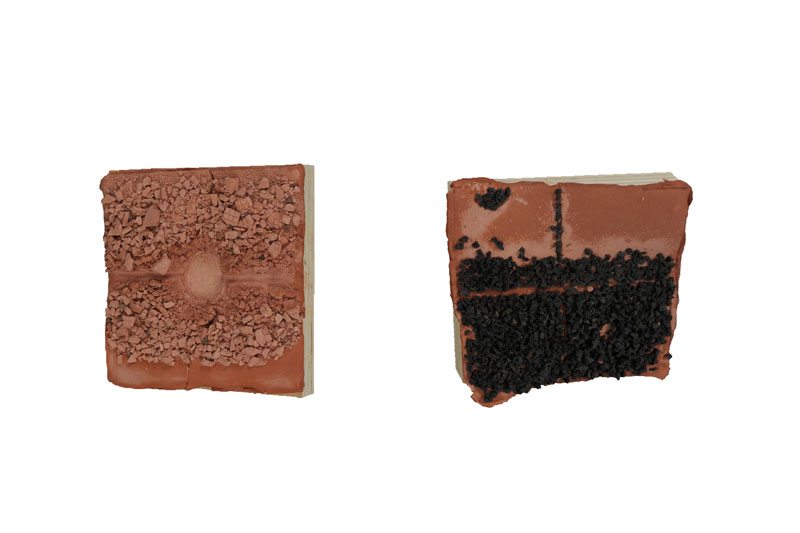 the lava fields of the piñacate desert 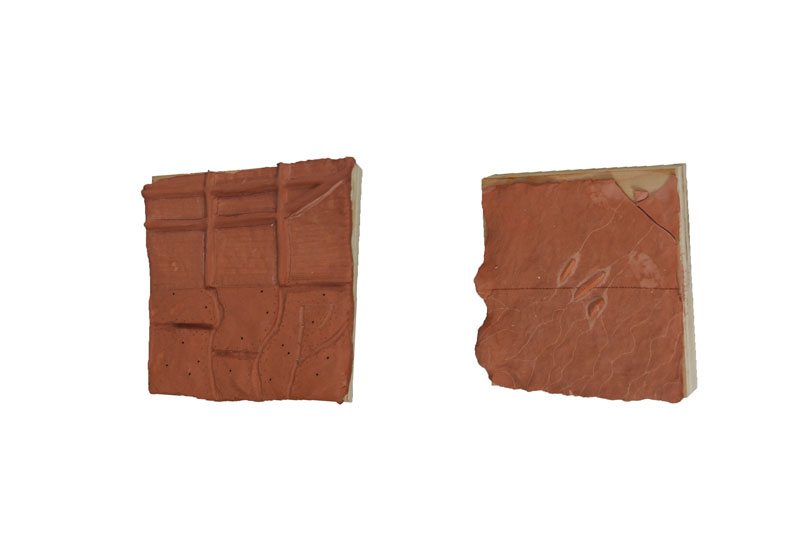 how arroyos are reappropriated as irrigation systems 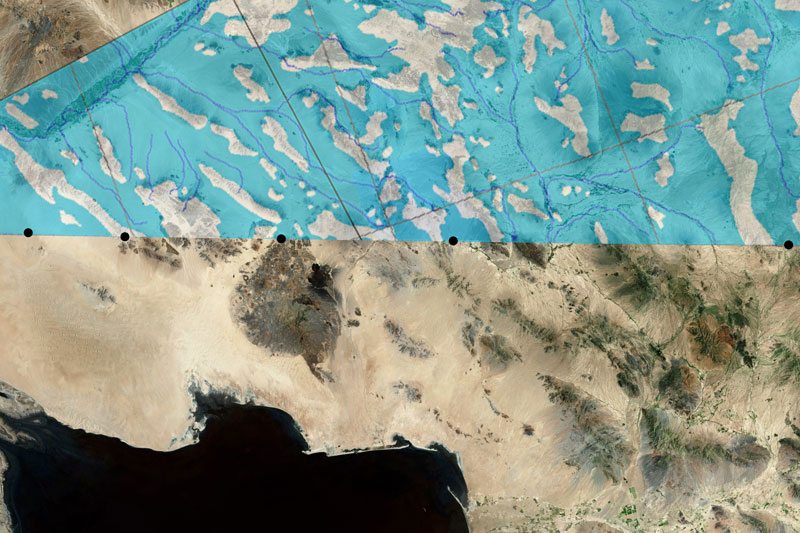 on the surface of the desert there is no water. however, hidden beneath the surface are vast fields of aquifers, rendering a the desert a subterranean oasis 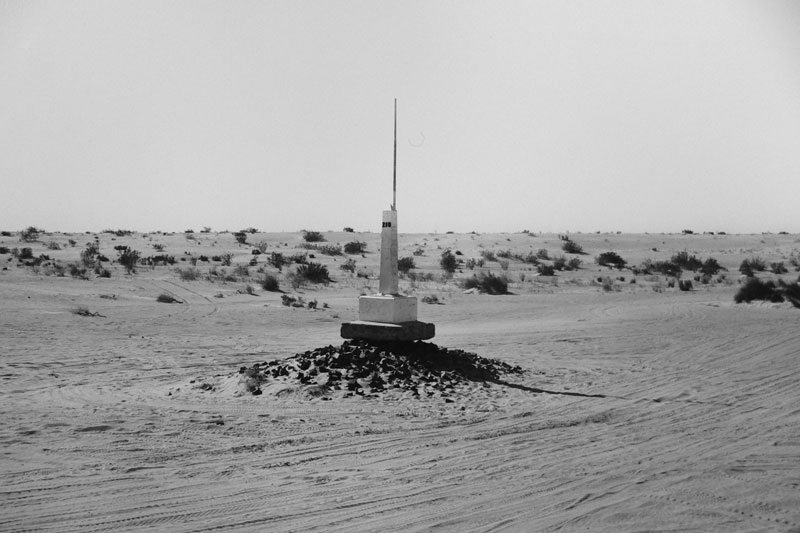 although early monuments were equipped with flagpoles, this pole is used to mark the boundary under shifting sands. Even with the extension, the monument is often covered 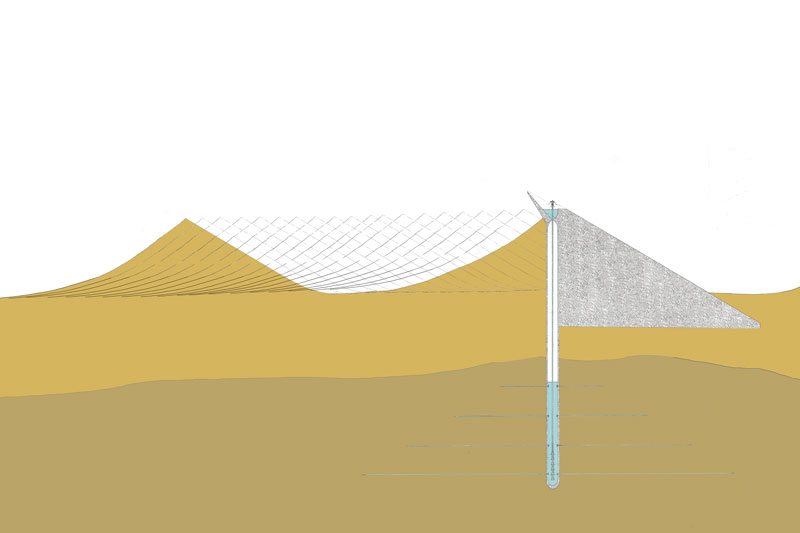 water wells are inserted into the dune-scape to tap into the aquifers below. the dynamic qualities of the site expose and conceal parts of the structure, but never completely engulf the well 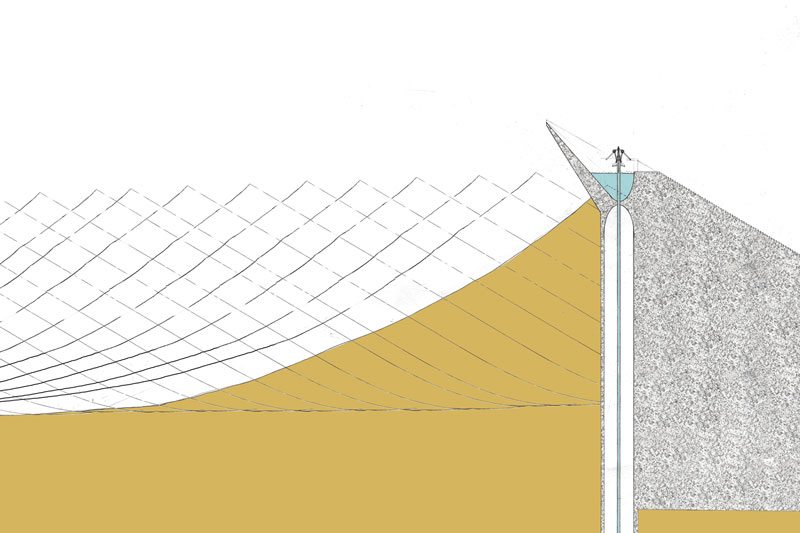 detail of the dunes moving through the water well 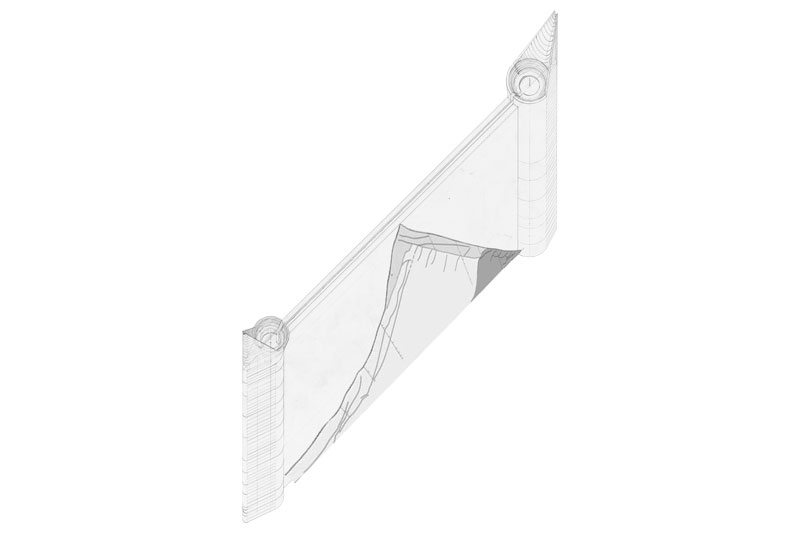 sometimes the dune itself becomes the stairway to the elevated well, using the angle of repose as circulation 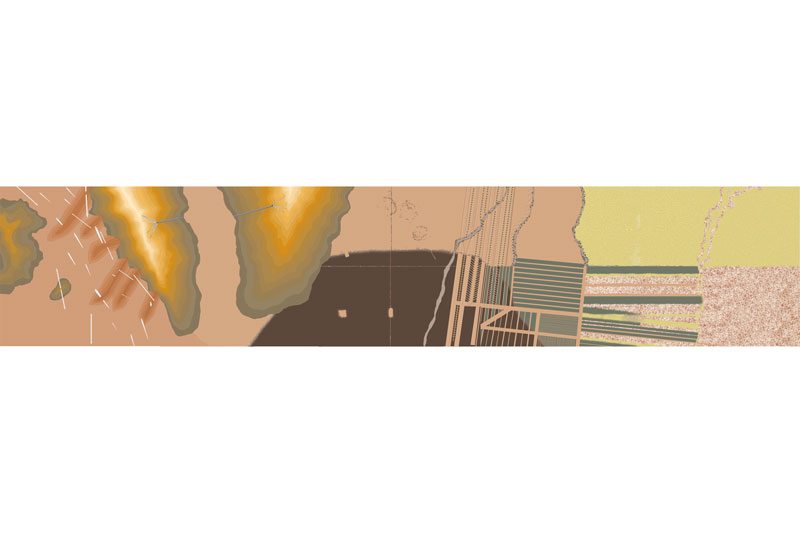 map of the “blurred” border between Mexico and America. If we are to have a border between these two countries, it should take into consideration the ecosystems that bisect it 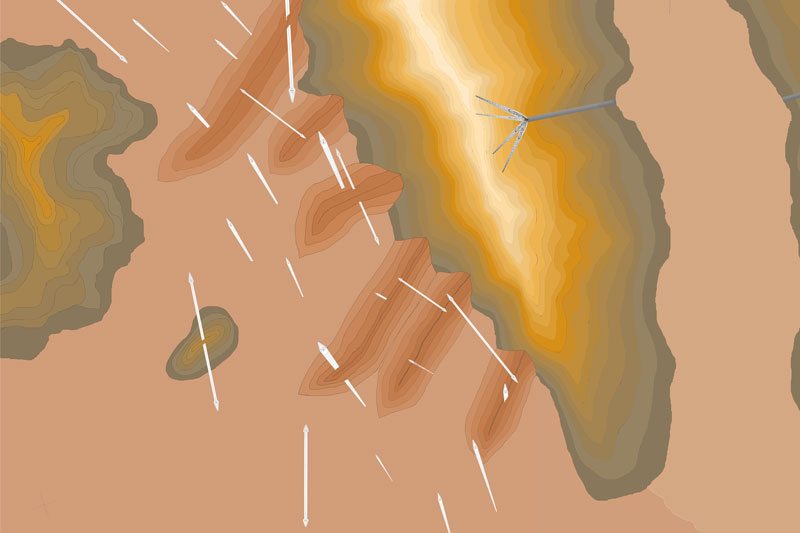 map of the sand dunes with water wells 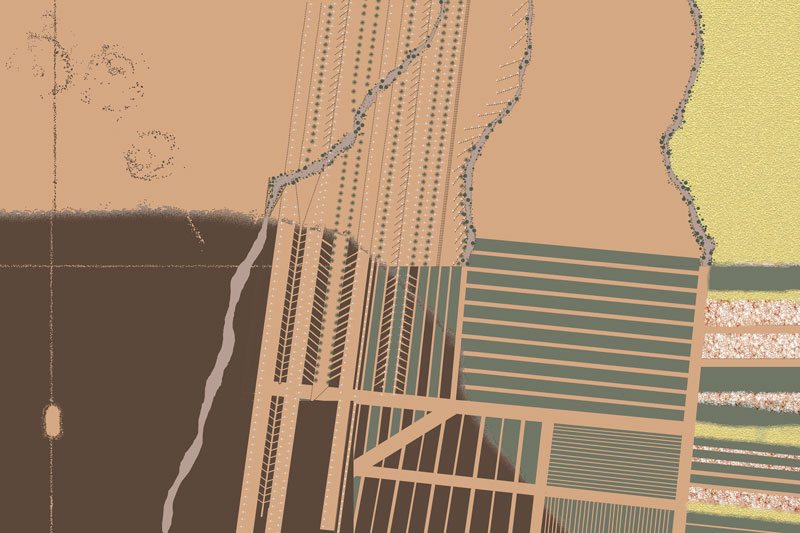 agriculture and native species co-mingle to create a hybrid ecosystem 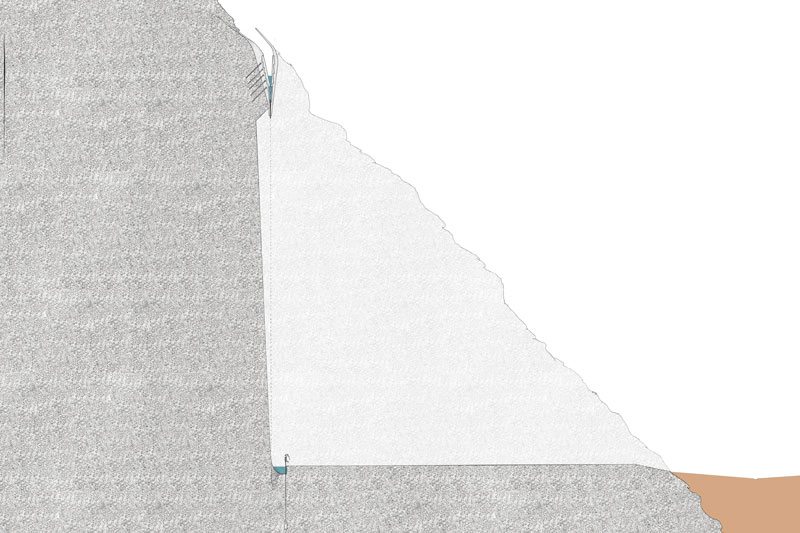 the tiñajas altas (high tanks) were a primary water source of the Papago indians. Strategically placed wells with filters are placed in the mountains to create artificial tanks and sources of hydration 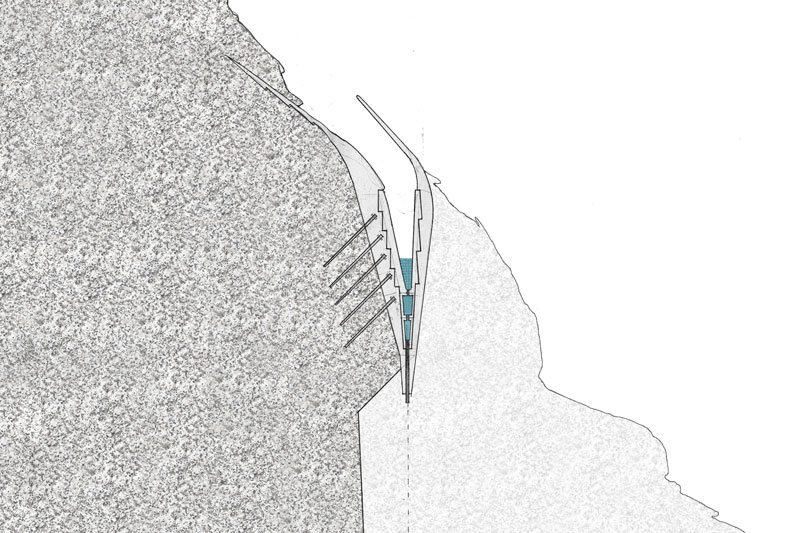 under constant surveillance, the wells are camouflaged to accommodate passing immigrants 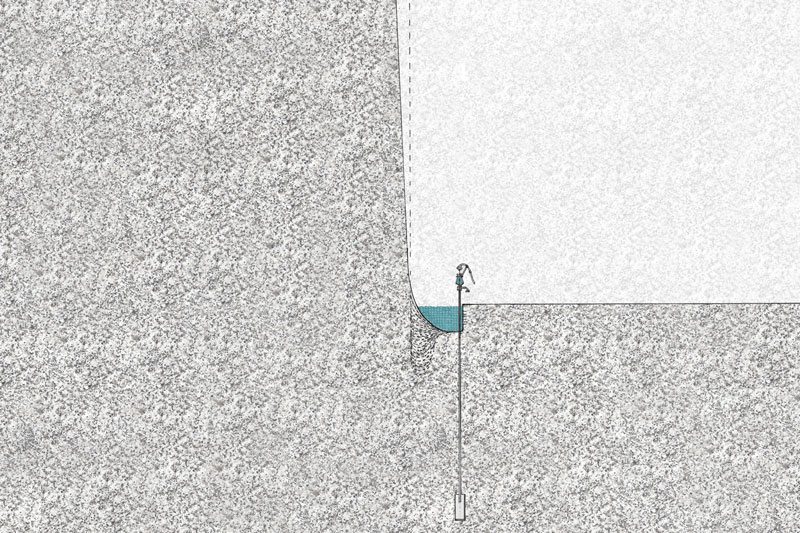 after filtering through the tank, water collects in a shaded pool to prevent evaporation