“There are three kinds of space that must be regarded as primary: functional, ornamental, and symbolic. The basic architectural formal values do not extend beyond the limits of the three kinds of concrete space. Within those three spaces architecture with its numberless forms and expressions is a composite.”

The ornamental space is an uncommon term whereas to start the design process, with the function quite usual. Even the approach from spatial quality as a symbol has a certain tradition. The image of an ornament still belongs to the surface like the pattern from wallpaper or carpet. In this project the notion of the ornamental space will be approached through the investigation of the architectonic space. The project will focus on expressing the density and complexity of patterns and the ability to create infinite systems without clearly readable boundaries in the media of the architectonic space. The potential of this conceptual and formal design process is explored in the definition of a most common program, an apartment building. The imagination of an everyday experience will be a final test for the experimental definition of the ornamental space.(Christian Kerez) Ornamental space is suicidal, it promotes something while sacrificing itself, it creates a devil out of its own elements that actually destroys the space itself. The traditional spatial hierarchies vanish, the space becomes trivial. Space frames the structure discrepantly, creating a tension between the feeling of relevance and alienation, the normal structure suddenly becomes unfamiliar and mysterious which visually and experientially dominates, while the space itself fades away into nothing. Ornamental space is a place with no clear direction, no decisive perspective. Everything or nothing could happen, people no longer perceive them as merely users, but more importantly participators, constantly discovering or encountering new moments in the space. 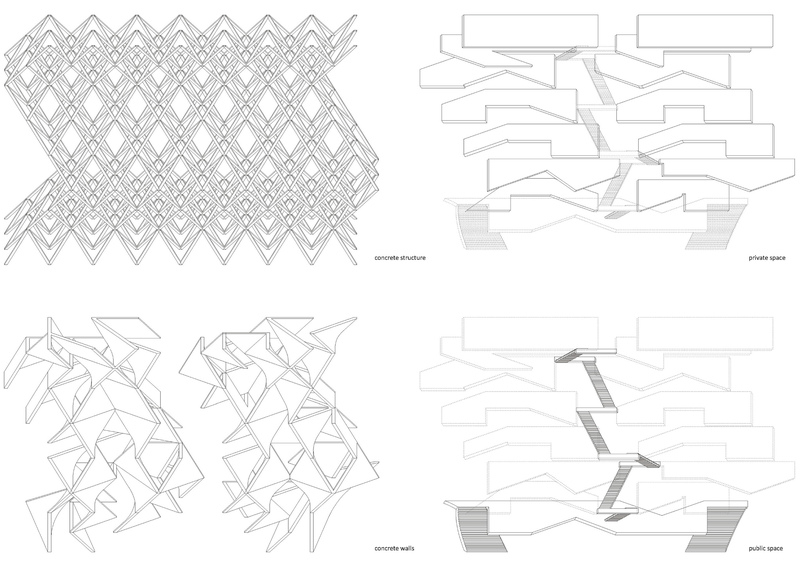