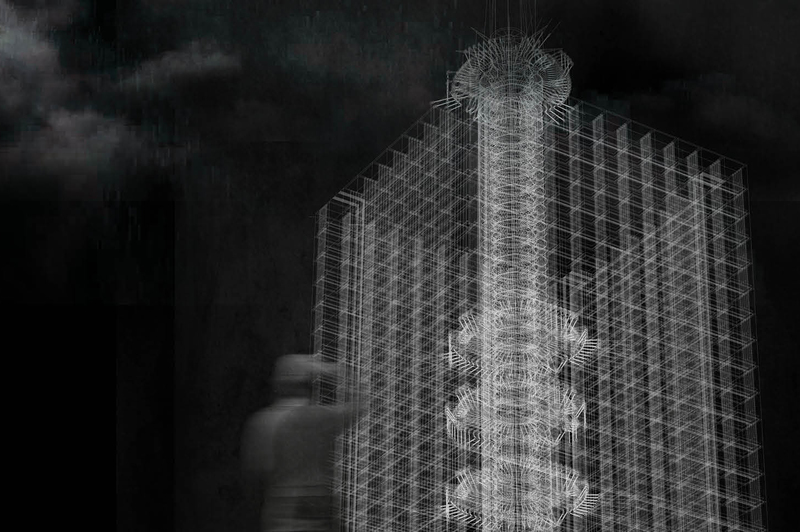 The Collecting Architecture Territory studio is interested in new methods of collecting art. Considering the site, Beirut, the fragility of art collections, and the museum during the war, I proposed a self-defensive tower which storages art and displays them on facades of the building as well as in the inside. The new museum is controled by robots and work in a strict mechanism which varies in the three different status of safety.

One of the most significant developments reshaping the intersection of art and architectural practice over the last three decades is the veritable explosion of new institutions and foundations that have emerged out of private collections of contemporary art. The sheer breadth and diversity of such institutions-ranging from experimental new museums to renovated industrial, commercial, agricultural, or military buildings, and from long exhibition venues- grows with every year. The historical institution of the museum is undergoing a transformation that demands new forms of territorial, economic, and spatial analysis. For modern art museums, main challenges lie on the following aspects: the change of viewing approaches when digital media gets involved. For example, The Metropolitan Museum of Art opened the online reserve to let people download and explore works of art from the Museum’s encyclopedic collection; increasing collections and limited storage space; the long distance from warehouse to museum brings problems on shipping and storage; not all the art collections which curators buy can be shown to public due to the limited display chances.

To investigate the condition of contemporary art museums, I went to the Middle East to visit national museums and private institutions in the same time. For both of them where political and military situation seems intense, the prime challenge serves to be how to survive during conflicts or even wars and protect fragile art collections in the same time. I proposed an intellect-controlled museum where collections are kept in the modular cylinder space which goes through the ground. The core is surrounded by a series of machines which move in a vertical direction. Robot arms can alter each component’s length and each joint’s direction to complete a series of precise movements. The whole system is in charge of classification, transportation, and alteration of the collections. The flexibility of the display method exposes all the reserve collections on the facade, which brings a new method of viewing collections: You don’t need to go into the museum to see the collections. Self-defense tactics is carried out in this no-curator museum which is only controlled by an intellect system. The system changes into three statuses to adjust to surrounding environment: safe mode, partly defense mode and all-around security mode.